8/19 – feel free to skip the following airline rant: we survived an overnight flight from Minneapolis to Frankfurt on Condor, flyer of planes with the world’s narrowest seats. My knees were jammed into the seat in front, which means poor long-legged Jim had to spend 9 hours practically in a fetal position. Needless to say, no sleep was achieved by either of us until our connecting flight to Lisbon. (And there was no choice of dinner or movie.) But we are here! End of rant.

We did a great job negotiating the Metro ride from the airport to the southern end of the city. We are staying in a small hostel in the historic Alfama district, a stone’s throw from the Cathedral Se. On our first (jet lagged) evening, we walked around to get our bearings. For supper, we ventured into a restaurant that looked like it had reasonable prices, and ordered two random items off the menu, as we could not read a word of Portuguese. We had studied words like frango(chicken) and carne (meat), but could not see any familiar words on the menu! I ended up with sausage and a fried egg, and Jim got purple meat (we found out later that it was pork marinated in red wine). Both dishes came with French fries AND rice – carb heaven! And so we survived our first day.

8/20 – Lisbon! A beautiful sunny city, not too hot, with narrow cobblestone streets as hilly as San Francisco.

Lisbon has it’s own version of the Golden Gate Bridge, called the Ponte de 25 Abril: 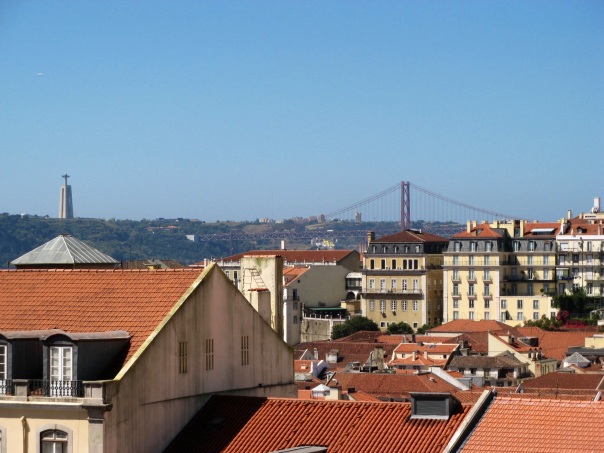 We enjoyed a variety of street performers as we walked up and down the narrow streets, including a statue that sprang to life and tried to cut off people’s heads! 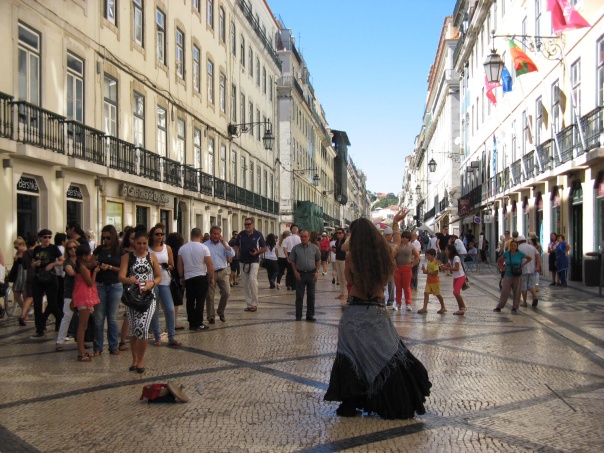 As a result of my summer of hiking, I strode up every hill without huffing or puffing. Thank you, Jim, for making me walk 500 miles!

4 thoughts on “Welcome to Lisbon!”