11/16 – well, there are things you can do, and things you can’t do, and it looks like traveling overland through Bosnia is one of the things we are just not going to do. Not impossible, but our options were limited and sounded unpleasant, so we opted to go back the way we came.

We got on the bus at Medjugorje for the four hour ride south to Split. Boarding with us was a man from Italy, who had filled up his entire rolling suitcase with big, dinner plate sized rocks taken from Apparition Hill, and had filled several plastic shopping bags with his displaced clothing. The bus driver told him the charge for stowing luggage was 8 kuna per bag, so he proceeded to unload the rocks one by one into the storage compartment, grunting with exertion, with the argument that if the rocks weren’t in a bag, he shouldn’t get charged! He went on to explain that he was bringing the rocks home as an inspiration to his poor, aged mother…. I think the driver gave up and let him stow the rocks. I would normally look aghast at someone helping themselves to parts of a shrine, but that hill won’t miss a few big rocks!

Unlike our ride north earlier in the week, the sun was shining and the clouds were awesome. Don’t you agree? These pix taken through the window of the moving bus: 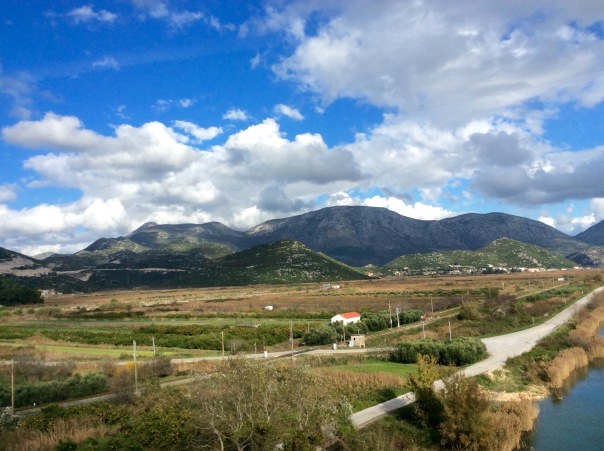 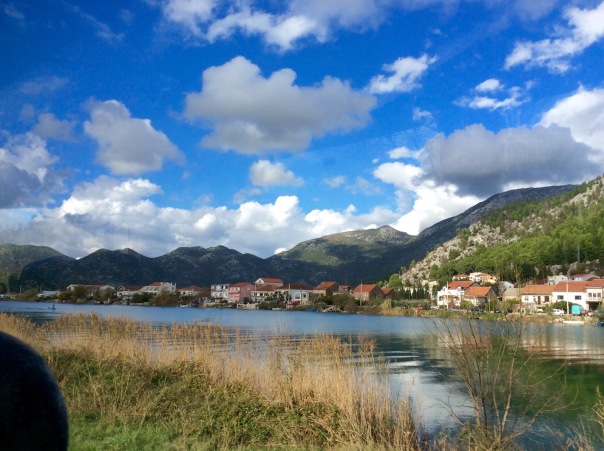 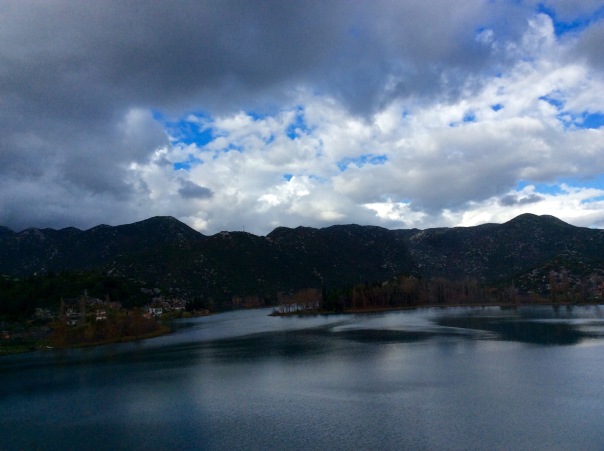 So now we are back in our comfy apartment, and our lovely host Pera has left us more oranges and candies. It’s nice to be back home, if only for a day! Tomorrow, we take the train back to Zagreb.

We are in Medjugorje (Bosnia and Herzegovina), the place where six children began having visions of the Virgin Mary in 1981. Karen had strained a muscle in her hip and I was hoping that she might be cured by the healing water that comes out of the statue of the Risen Christ. She took some more ibuprofen and we walk toward St. James Church, on our way to Apparition Hill, where the first visions occurred.

The streets are lined with souvenir shops. Medjugorje attracts over a million visitors a year but the shops are empty because not very many pilgrims come in November. 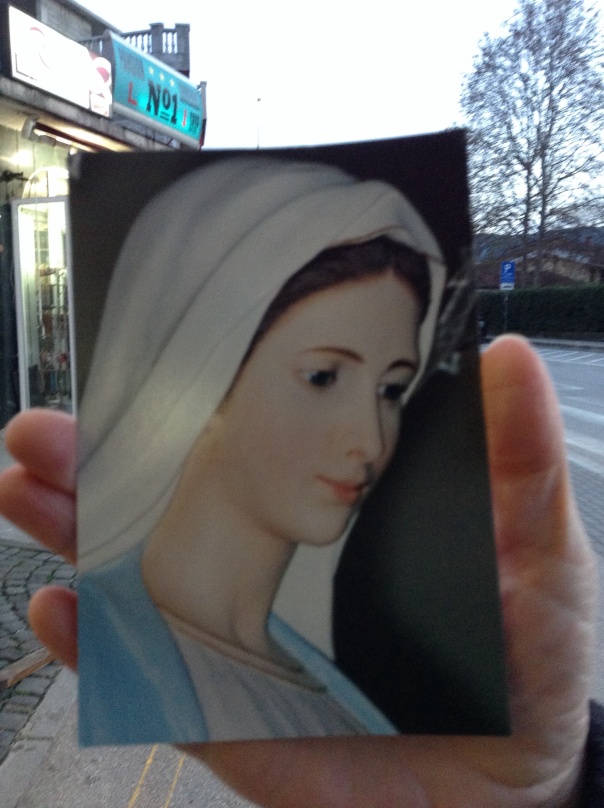 The shops sell post cards with the image of the Virgin Mary, as described by the children.

There are also posters for sale with her image.
“She doesn’t look like a Palestinian Jew, does she?” I remark to Karen.
“Michelangelo used the people around him for his…

11/15 – another warm, sunny day, and my hip is feeling better. Today we will climb Apparition Hill, where the six teens first saw Our Lady, Queen of Peace. It’s a two mile walk to the base of the hill, past hotels, souvenir shops and cafes. We are concerned that there don’t seem to be enough pilgrims to keep all these places in business. There are several new buildings that look like construction was abandoned halfway.

On the road we spied this sign, which leads me to think that the Last Trumpet will not be blown here! 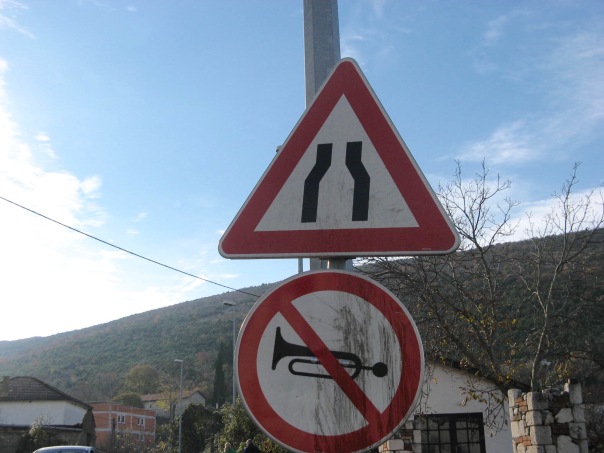 We reached the foot of the hill, and tried to determine the best route up. No clear trail has been established – people just start climbing from wherever they are.

Not too far up the hill are two blue crosses, which mark the spots where two of the children received their visions. Many stopped to pray their rosary here. 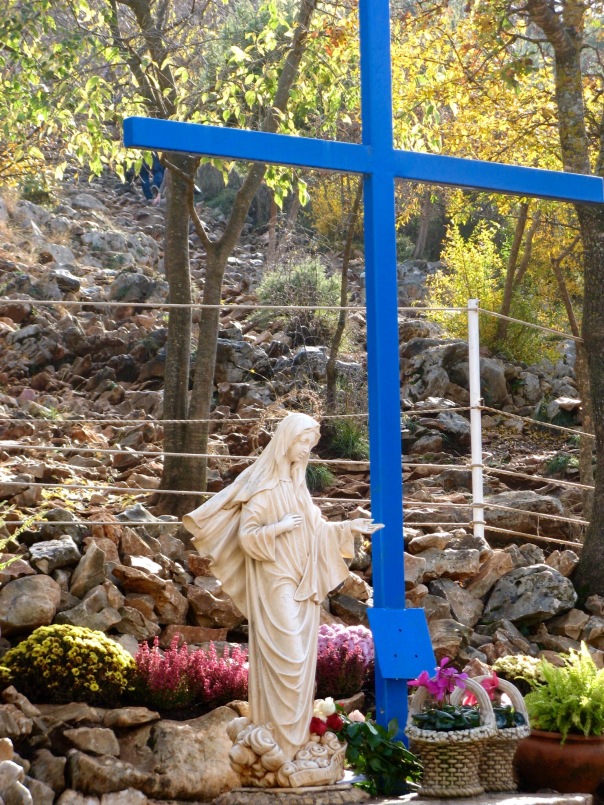 Despite the sharpness of the rocks, some, young and old, climb the hill barefoot. Many are assisted by their grown children or grandchildren. Many walk with a cane. There are reliefs depicting the mysteries of the rosary as we ascend. 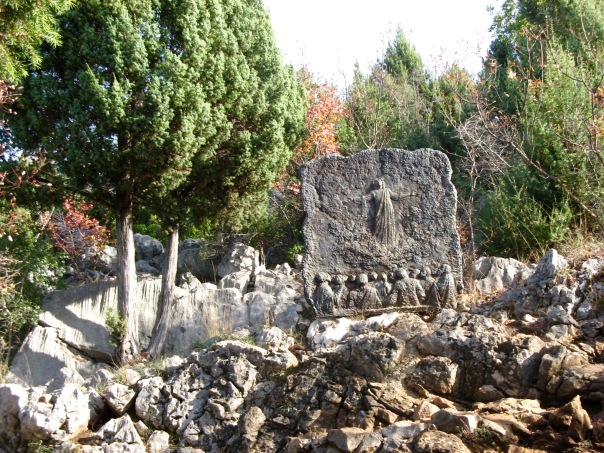 At the summit is a life sized statue of Mary, on a base shaped like a star. Many are praying, kneeling and weeping here. 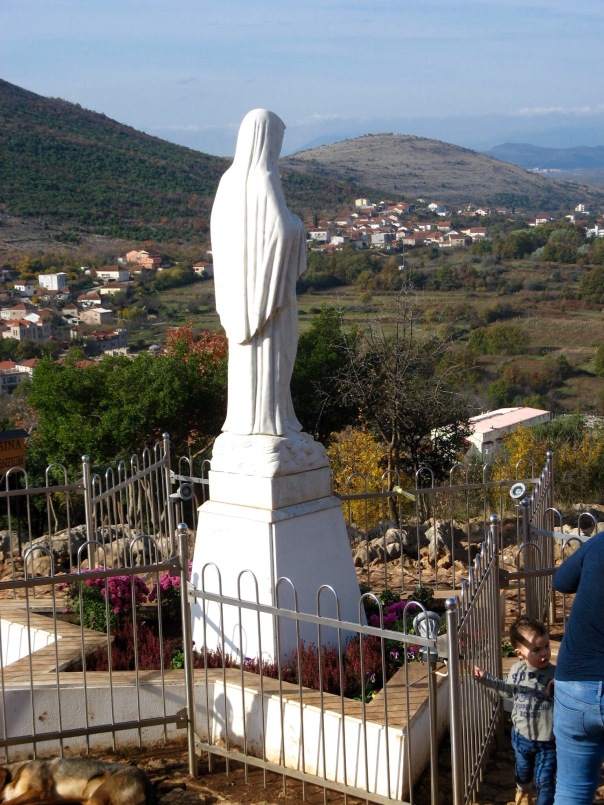 Behind the statue is a crucifix, where others kneel on the rocks.

We made our way back down the hill, passing those on their way up. I can feel my feet bruising from being squeezed in rock crevices and hitting sharp rock edges. I’ve turned my ankle, and can’t imagine what those in bare feet must be feeling. I consider that Medjugorje asks more of its pilgrims than the other Marian sites we’ve visited.

In the evening, we returned to the church. Jim wants to see if the Risen Christ statue is still seeping. He purchased some little cloths with the statue imprinted on them at the souvenir shop, sold expressly to catch this moisture. There are many more people now, and we have to wait in line for a turn near the knee. The knee is not seeping now.

The other Marian sites had large areas for lighting candles. We know there must be one here, but haven’t seen it. We walked all around the church until we found this little area tucked away in a corner, with a flowing fountain. Very pretty and very peaceful.

Today is warm and sunny, a total contrast to yesterday’s grey skies. Shirtsleeve weather, no jackets required. My hip is still troubling me, but improved since yesterday. I plan to take it easy today.

After breakfast, we walked the half mile to St. James Church, in the middle of Medjugorje. This very modern church was built prior to the start of the apparitions in 1981. It is said that the building of the church, way too large for the size of the small town at the time, and it’s dedication to James, the patron saint of pilgrims, are part of the miracles of this place.

In the courtyard in front of the church is a statue of Mary. You can see construction of a hotel right behind.

Inside, a mass was in progress in English, with folk guitar accompaniment. The church is very plain, with arched windows and an arch over the altar, but no large crucifix or statuary. There is a Mary chapel off to one side, adorned with many flowers. 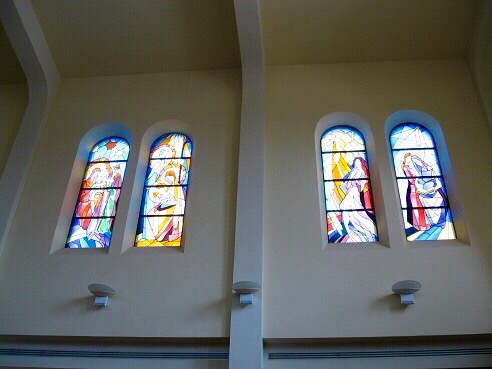 Behind the church is an outdoor amphitheater with a Jumbotron and seating for thousands. This was added once pilgrims started coming in large numbers, following the Bosnian War in the early 90s. 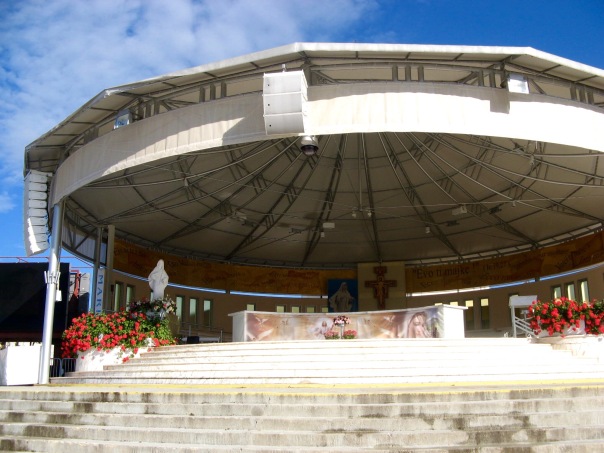 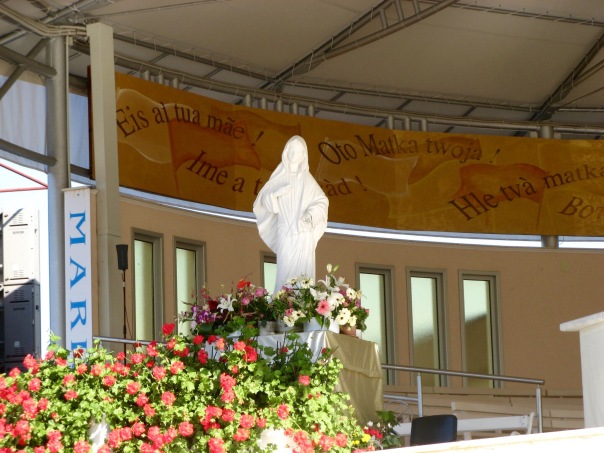 There are gardens behind the church with Stations of the Cross and walking paths with mosaics of the life of Jesus. Walking, praying and quiet contemplation are encouraged. 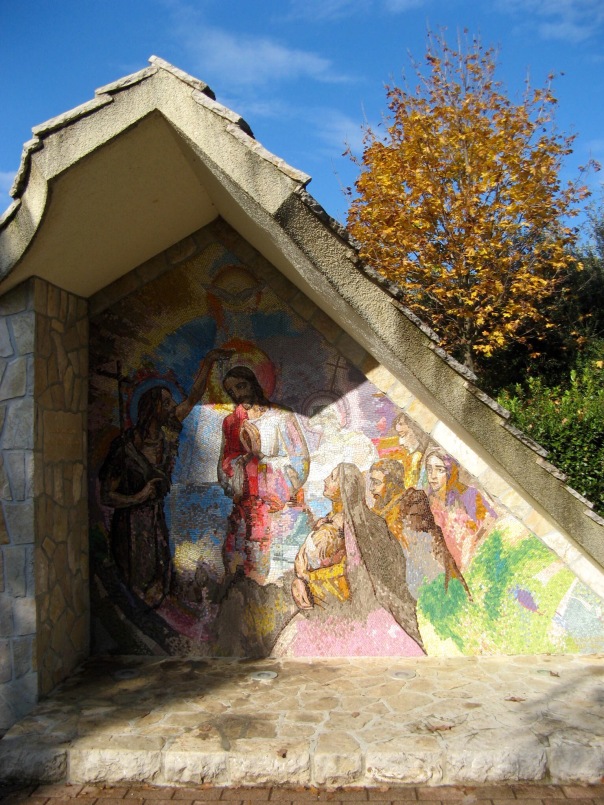 Water seeps from the knee of this statue, erected in 1998, considered to be a miracle of this place. You can see where the color of the metal has changed from all the hands that touch this knee. People leave pictures and written prayer requests at the foot of the statue. Yes, we saw water seeping from the statue. 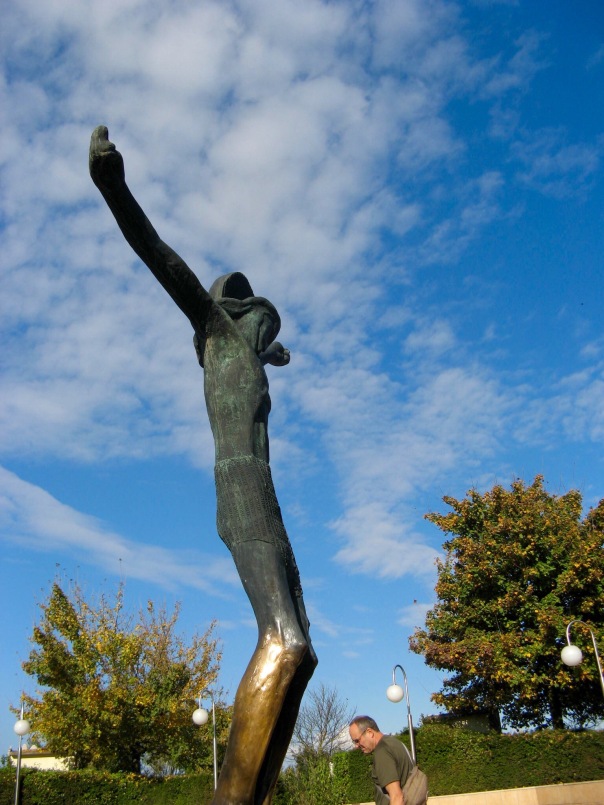 On Friday afternoons, the faithful climb Cross Mountain, where they observe the Stations of the Cross. The large, concrete cross was erected in the 1930s, and is not connected to the apparitions, but the erection of the cross in this town is said to be part of the miracle of this place.

Unlike Lourdes, which caters to the wheelchair-bound, Medjugorje pilgrims must be fit. It is a two mile walk to the base of the mountain, and a steep, rocky climb to the top, which is more than my hip will allow me to do today, so Jim goes up alone. Some of the faithful go up barefoot, and many kneel on the jagged rocks at every station.

Here are Jim’s pix from the top of the mountain.

11/13 – yesterday the skies opened and the rain poured down, so we stayed close to home in our cozy apartment in Split. Our gracious landlady came down to make sure the water wasn’t coming in anywhere – there had been trouble with flooding before. We were nice and dry. She offered us more schnapps. Gotta love this place!

I spent most of the afternoon trying to plan the next leg of our journey. Jim wants to go to the pilgrimage town of Medjugorje, (Med you GOR ya) where the Virgin has been seen or heard daily for over 30 years.

We can get there easily enough on a Croatian bus from Split, in about 4 hours. The problem is where to go from there. Looking at a map, it appears to be a straight shot from there to Sarajevo, then northeast to Belgrade in Serbia, which is where we’d like to go. However, the nice folks at EuRail tell us that this train doesn’t run anymore, and the website for Bus Bosnia suggests that we rent a car! Oh well. The Bosnian infrastructure may have some issues. I’ll keep working on it.

The bus ride was tranquil, taking us up the coast advertised as the Croatian Riviera. Lots of posh hotels, casinos and yachts in the harbors. Only got a few pix, due to the rain. 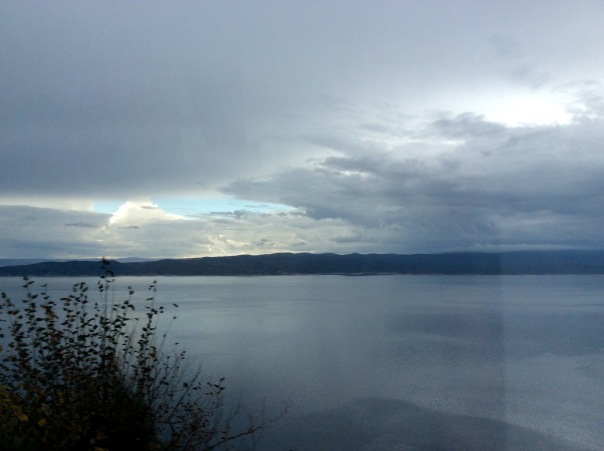 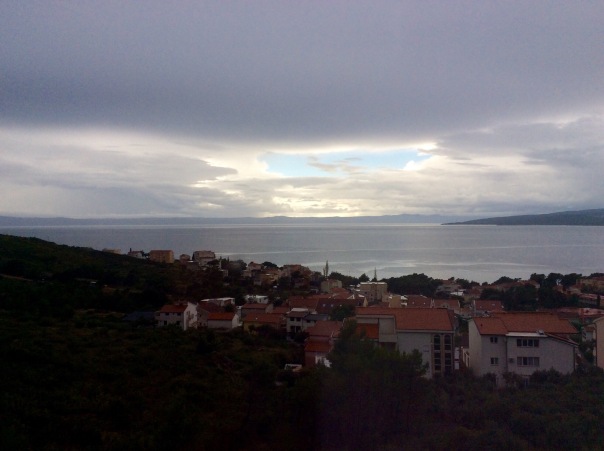 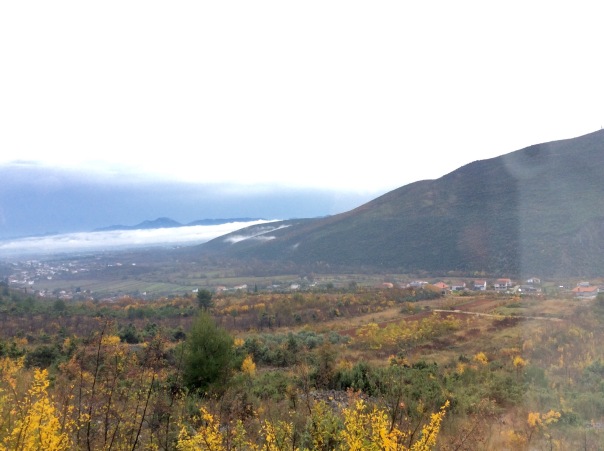 After a short border check, we were in Bosnia, and the rain stopped. By 4pm, we found our apartment in one of many new buildings erected to support the influx of pilgrims. We have a brand new kitchen, and a washing machine that looks like a deluxe cheese grater!

Unfortunately, I hurt my hip lifting my pack this morning, and have been in considerable discomfort all day. I hope I can walk to the pilgrimage sites tomorrow.

Medjugorje was a small village prior to 1981, when six teens started reporting communications with Our Lady, Queen of Peace. The messages, sightings and miracles have been occurring daily since then, and over 40 million have visited the town, which has grown to support all the pilgrims who flock here. If you are not familiar with the history of the apparitions, you can read up on them at Medjugorje.org.