12/5 – Today was our fourth and final (we dearly hoped) two hour journey to the Chinese Consulate, to pick up our passports and new Chinese visas. While walking to the Metro, we encountered a harrowing scene – a beggar woman being dragged down the street by men in black, while her two young daughters were dragged away in the opposite direction, screaming for their mother. We’ll never know the story, but it shook me to the core, and I found myself sobbing as I walked. The crowd bustled on, as if nothing had happened. We got on the train.

We had instructions to first go to a certain bank and deposit $280 in the Chinese Consulate account. We took a taxi to the specified bank, and waited patiently until our number was called. We handed over the form the Consulate had given us. We were asked for our Turkish Tax Number. What the what??

We explained that we were Americans and had no Turkish tax number. They politely told us they could not take our money without a tax number. Perhaps we should take a bus to another town where we could obtain a tax number. Not acceptable. We talked to several people with varying degrees of English and arm-waving. We marched upstairs to speak with the manager. There was nothing they could do. The Consulate was called. Someone from the Consulate instructed us to come to the Consulate right away. We caught a taxi and arrived at the Consulate within minutes. The guard told us no one was there and the office would not reopen until 3pm. We waited outdoors in the grey and rainy afternoon. There are lots of cats here, as we have noticed throughout Istanbul, independent and seemingly well fed.

When we were finally admitted to the Consulate we found the young woman we had met on the first day. We explained the current situation, and she went Back Behind the Door. She emerged with a solution – we could give her the money directly. Great! We had the cash, in Turkish lira. Not acceptable – they needed US dollars. She told us to go back to town and change the money. We explained that we couldn’t change money, as they were holding our passports! Eventually, the young woman understood our Catch 22 situation. She gave us one passport, and held the other. We caught a cab back to town, found the HSBC bank where money could be changed, got burned with a terrible exchange rate (what choice did we have?), took another cab back up to the Consulate and retrieved our second passport a half hour before the Consulate closed for the weekend. Whew! Success!

Then we looked at our new visas. We had furnished an itinerary that said we planned to be in China for three months. Our visa was good for two entries of 30 days each. Our itinerary said we would get to China by mid March. The visa said we had to be in country before March 1. Sigh. What doesn’t kill us, makes us stronger. Time to rework our plan. 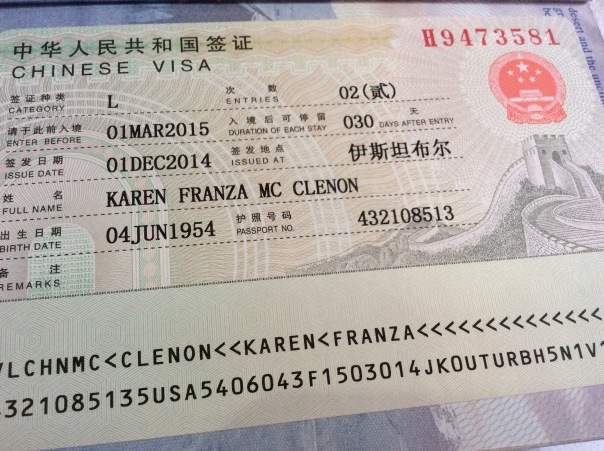 12/2 – to update our visa tale, we spent Friday morning waiting at the Chinese Consulate while the Person Behind the Door perused our hastily fabricated itinerary and bogus hotel reservation ( we picked the most expensive hotel in town – why not?). After cooling our heels for several hours…. success! We were instructed to deposit $280 in the Consulate’s bank account, and come back next Friday to retrieve our passports and our two-entry visa for mainland China. Deep sigh of relief…

All roads here seem to lead to the Grand Bazaar, and we strolled through several times, not looking for anything in particular. The friendly sellers try to gauge where we are from by looking at our shoes. As we wear hiking boots, we are often pegged for either German or Australian. When we reveal we are from America (USA gets blank looks), we sense an increased desire on their part to sell us something. We are invited into many back rooms for tea. 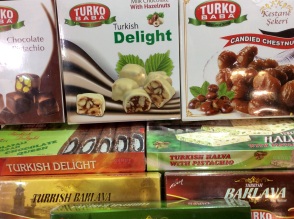 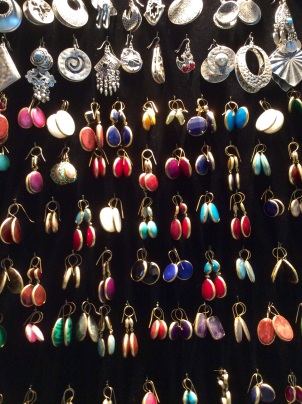 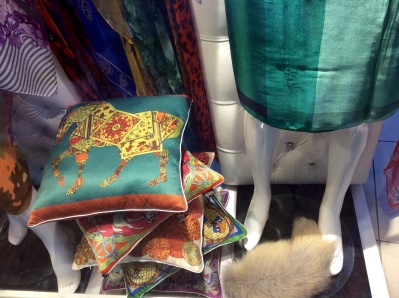 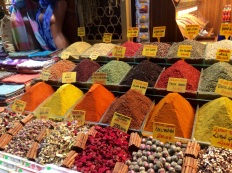 We bought some presents for the kids, and had to walk to the downtown post office where international parcels can be mailed. The postage cost more than the gifts, and they are expected to arrive in 20 days. Where is Fed Ex when you need it? 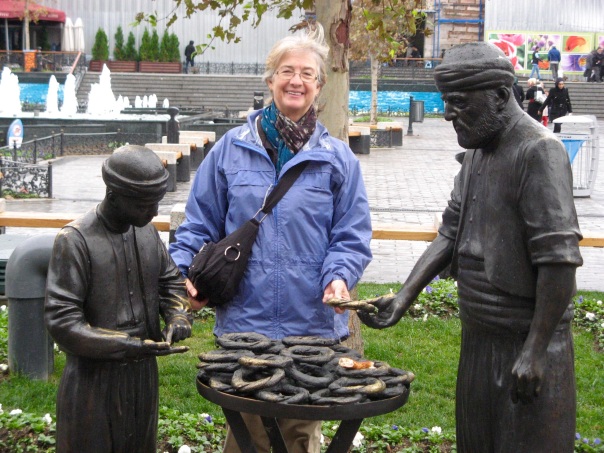 11/17 – we got up early for the 8am train back to Zagreb. As soon as she heard us moving about, Pera brought down a tray of Turkish coffee and cookies to see us off. What a nice lady! We will miss her smile. If you’re ever in Split, you can’t do better than Apartment Pera. We found her on Booking.com.

When we were almost to Zagreb, we were informed that we would, once again, have to get off the train and get on a bus to get around a track problem. That’s the third time in a week! We hear that trains get less reliable from this point on, so this may be our new reality.

Got back to Zagreb in the late afternoon, where we are staying one night at the Palmer Hostel right near the train station. Very convenient, with a private room, and shared kitchen. We had a nice conversation with a retired Chinese couple who have been touring Europe for two months. They were excited that the U.S. and China had just extended visas for our respective countries to 10 years. Next year they plan to spend a nice long vacation touring the U.S.

This made us think about visas. We are swiftly running out of Europe, so I spent most of the evening looking into which countries in our near future require special visas, and how to get them. Turkey is first, and we secured that one online in about 10 minutes. The biggest problem looks like it’s going to be China, as you are supposed to apply from your home country. We couldn’t find any backpacker advice online that would help. Once we get to Istanbul, we will visit the Chinese Embassy, and see what alternatives are available to us.

11/18 – came downstairs for breakfast at the hostel, and someone had stolen our bananas! On closer inspection, Jim had put them on top of the fridge, which had a little sign that said it was a Free Food area. Oh well, some deserving backpacker was probably really happy to get some free bananas…

The train took us through some really pretty Croatian countryside, with the first sheep, pigs and horses we’ve seen in a while. 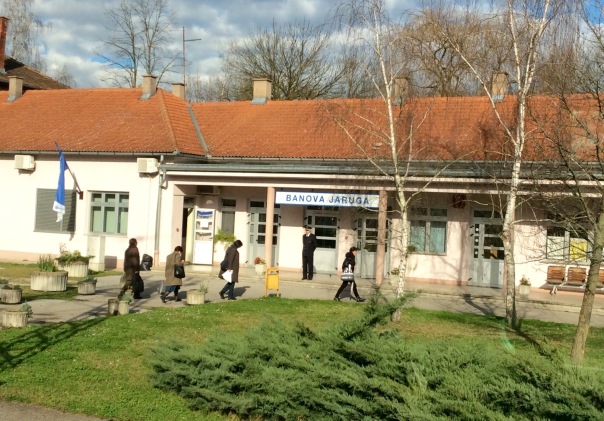 By 3pm we crossed into Serbia. Now we have been in three of the countries that used to be called Yugoslavia: Croatia, mostly Catholic, Bosnia-Herzegovina, mostly Muslim, and now Serbia, mostly Orthodox. We understand that Serbia shows the most scars from their war in the 1990s. Tomorrow we shall see.

Arrived in Belgrade on time (!), in the dark (streets not well lit) and cold! As in Brrrrrr! I’m going to need a hat! We had the street address for our apartment, but once we got there, it was in a big apartment building, and we could not see a way in. A young woman offered her assistance as we stood outside the door looking cold and confused. She called the phone number Jim had written down (our TMobile world plan doesn’t work in Serbia either), and told the landlord we were waiting outside. Our first Nice Person of Serbia! The landlord explained that he was illegally renting the apartment, which explained why there was no sign. Sheesh!

So now we are in our new cozy apartment, well fed with the omelette Jim fixed with supplies from the little market right down the street. We traded in our kuna for dinar, and we are ready to see Belgrade in the morning! 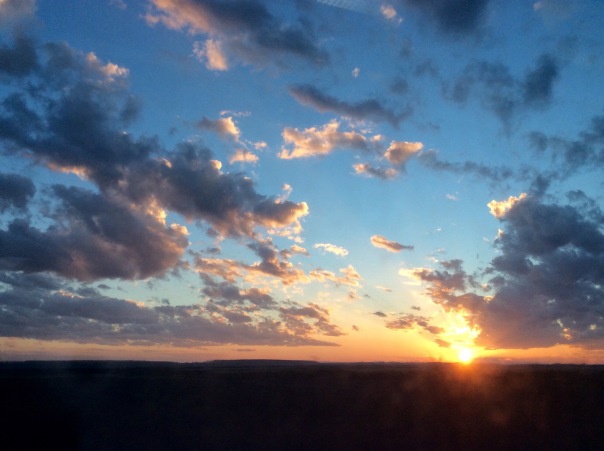