11/20 – today is cold and rainy. It feels like an Eastern European grey day. We struck out to find the Temple of St. Sava, still under construction, the biggest Eastern Orthodox church in the world. When complete, it will hold 10,000 people, and the choir will hold 800 singers.

Inside is lots of scaffolding, hammering and drilling noises, but a steady stream of worshipers come in to kiss the icons and pray. 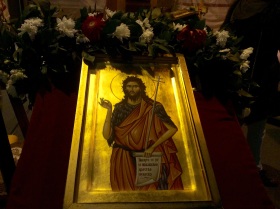 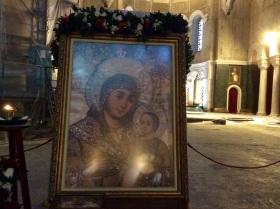 We stopped for lunch at a gyro shop, and watched as the proprietor fashioned each roll with loving care, and wrapped them as though they were his babies. It seemed a shame to eat such beauty, but gosh, they were delicious!

Walking across town, we came upon some buildings still scarred from the bombing during the 1990s war. We were told that they have not been repaired to remind the people of Serbia’s struggle: 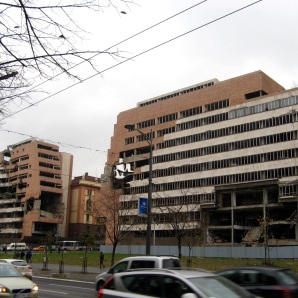 Then we set out to find the Nikola Tesla Museum, one of Belgrade’s top attractions.

If you don’t know about Tesla, he invented EVERYTHING: the motor, alternating current, radio, wireless transmission, vertical take-off aircraft – hundreds of patents and 700 more never finished. We took an English-speaking tour from an engineering student from the University who spoke with passion and reverence. She also demonstrated neat stuff, like lighting a neon sign remotely: 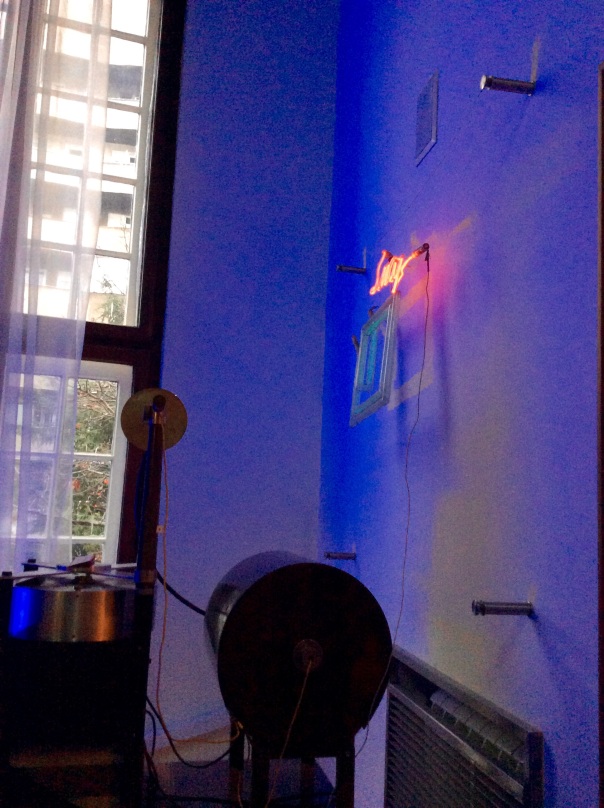 The museum also holds his books, papers, personal effects, and his ashes, displayed in a golden orb. It was a neat place, made extra special for me as Nikola was the spitting image of my dearly departed Alan, who would have loved this museum. 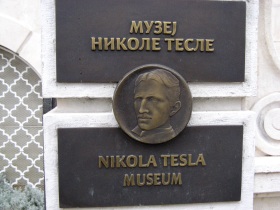 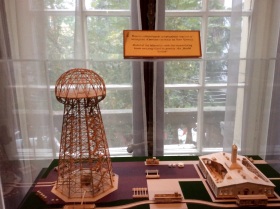 Now we are packing up to catch the overnight train to Sofia, Bulgaria. A new experience for me!

11/19 – Belgrade (or Beograd, as the Serbs call it), was the capital of Yugoslavia when I was in school, and now is the capital of Serbia. It is a big city. There are things we would like to see here, but without our GPS and not being able to read the road signs, we’re feeling a bit daunted. We walked back to the train station, and decided to take a taxi to Kalemagdan Park to see the Belgrade Fortress. Online, we were warned to use a government regulated taxi with a meter, but all the cabs at the station were meter-free. “How much to take us to the fortress?”, we asked the first cabbie. 800 dinar (8 dollars). The second cabbie said 700, the third offered 500. Sold! Crosstown ride for 5 bucks. He brought us right up to the entrance. 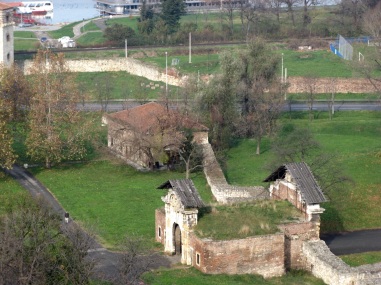 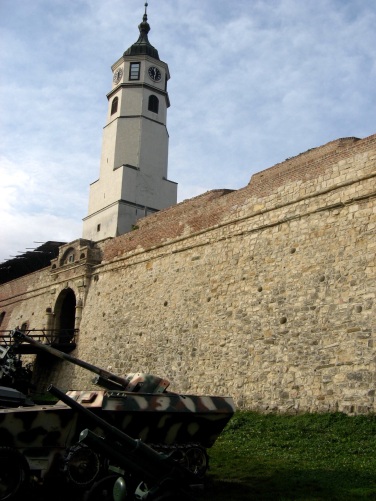 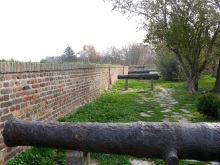 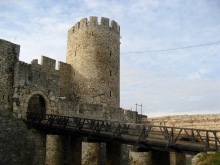 The fortress was built around the year 535, then rebuilt every time it was attacked. It oversees the confluence of the Danube and Sava Rivers. The skies over the city looked a bit smoggy. 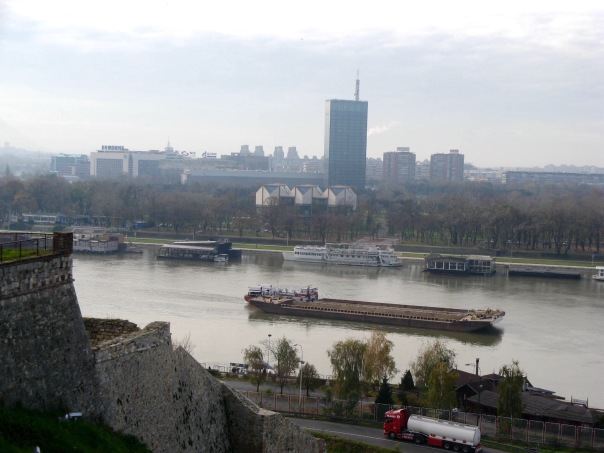 The fortress is part of a big park with lots of green space, walkways and benches. It contains a military museum, and lots of tanks, armaments, and WWII stuff. 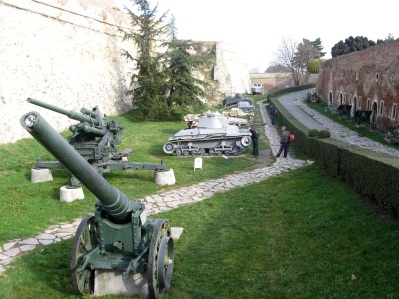 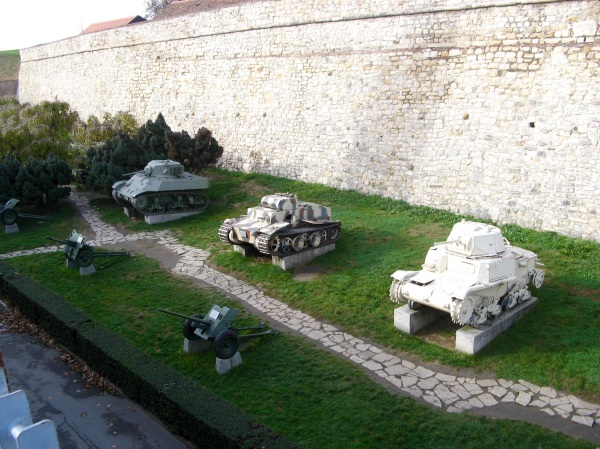 There is a zoo, with some pretty impressive reptiles: 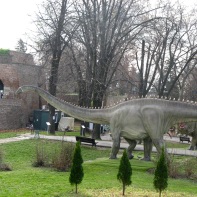 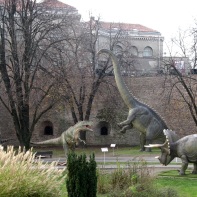 From the park, we could see the spire of the Belgrade Cathedral of Michael the Archangel, so we walked over to take a look. An Eastern Orthodox Church, there was no high altar, and no seating, but lots of beautiful artwork and gilded icons. 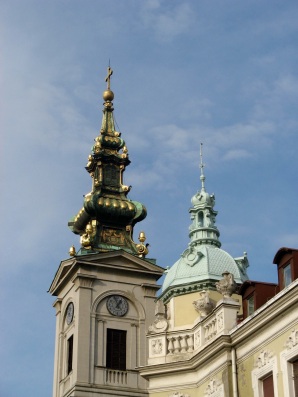 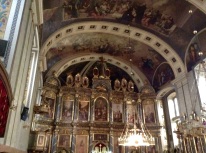 Down the street was the Residence of Princess Ljubica, which was a museum on our list. It showed a typical upper class residence of the early 1800s, and is full of uncomfortable-looking furniture, but some pretty neat indoor plumbing and a Turkish bath. 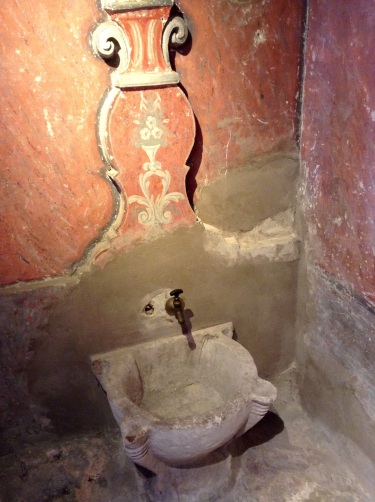 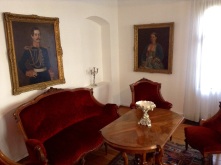 Jim was able to navigate us home without any trouble, and we’re feeling a little more confident about the city. Tomorrow, we’ll explore some more!

11/17 – we got up early for the 8am train back to Zagreb. As soon as she heard us moving about, Pera brought down a tray of Turkish coffee and cookies to see us off. What a nice lady! We will miss her smile. If you’re ever in Split, you can’t do better than Apartment Pera. We found her on Booking.com.

When we were almost to Zagreb, we were informed that we would, once again, have to get off the train and get on a bus to get around a track problem. That’s the third time in a week! We hear that trains get less reliable from this point on, so this may be our new reality.

Got back to Zagreb in the late afternoon, where we are staying one night at the Palmer Hostel right near the train station. Very convenient, with a private room, and shared kitchen. We had a nice conversation with a retired Chinese couple who have been touring Europe for two months. They were excited that the U.S. and China had just extended visas for our respective countries to 10 years. Next year they plan to spend a nice long vacation touring the U.S.

This made us think about visas. We are swiftly running out of Europe, so I spent most of the evening looking into which countries in our near future require special visas, and how to get them. Turkey is first, and we secured that one online in about 10 minutes. The biggest problem looks like it’s going to be China, as you are supposed to apply from your home country. We couldn’t find any backpacker advice online that would help. Once we get to Istanbul, we will visit the Chinese Embassy, and see what alternatives are available to us.

11/18 – came downstairs for breakfast at the hostel, and someone had stolen our bananas! On closer inspection, Jim had put them on top of the fridge, which had a little sign that said it was a Free Food area. Oh well, some deserving backpacker was probably really happy to get some free bananas…

The train took us through some really pretty Croatian countryside, with the first sheep, pigs and horses we’ve seen in a while.

By 3pm we crossed into Serbia. Now we have been in three of the countries that used to be called Yugoslavia: Croatia, mostly Catholic, Bosnia-Herzegovina, mostly Muslim, and now Serbia, mostly Orthodox. We understand that Serbia shows the most scars from their war in the 1990s. Tomorrow we shall see.

Arrived in Belgrade on time (!), in the dark (streets not well lit) and cold! As in Brrrrrr! I’m going to need a hat! We had the street address for our apartment, but once we got there, it was in a big apartment building, and we could not see a way in. A young woman offered her assistance as we stood outside the door looking cold and confused. She called the phone number Jim had written down (our TMobile world plan doesn’t work in Serbia either), and told the landlord we were waiting outside. Our first Nice Person of Serbia! The landlord explained that he was illegally renting the apartment, which explained why there was no sign. Sheesh!

So now we are in our new cozy apartment, well fed with the omelette Jim fixed with supplies from the little market right down the street. We traded in our kuna for dinar, and we are ready to see Belgrade in the morning!