1/25 – So sorry I didn’t get a pic of our wonderful supper last night – we were too busy eating. Here’s a small part of what we were served for breakfast, including a baked tomato omelette, fruit, cheese, homemade bread, warm marmalade, muffins, avocado, tomatoes, peppers, cucumbers, olives, candied citrus, a fruit smoothie, herbal tea and coffee with whipped cream. Ate ’til we were stuffed again, and then made sandwiches for lunch. Bravo Israel!

Back on the trail, we came upon the ruins of an ancient synagogue, discovered in 1905.

We walk near the cliffs of Arbel, and can see the Sea of Galilee in the distance.

There are caves in the cliffs where bandits lived in Jesus’ time. King Herod had to send troops to get them out of the caves, so travelers could proceed unmolested. 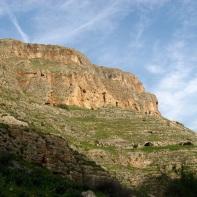 We met a young German girl named Mieke, who was also following the Jesus Trail. She became our companion for the day.

We also met some baby goats, out for a stroll with no one to mind them. 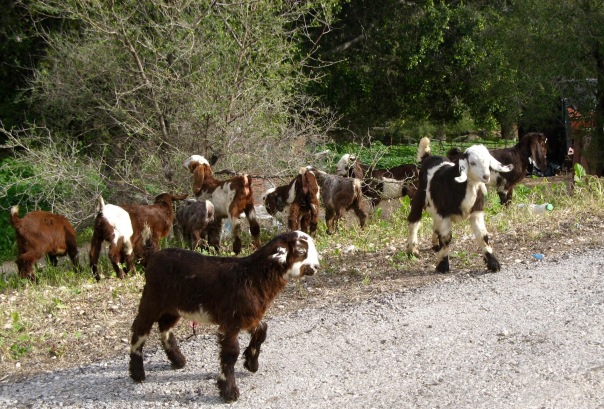 …some horses, up close and personal.

And, of course, some mama cows and baby cows.

We walked through groves of citrus (the grapefruit was yummy), carob, olives and bananas. 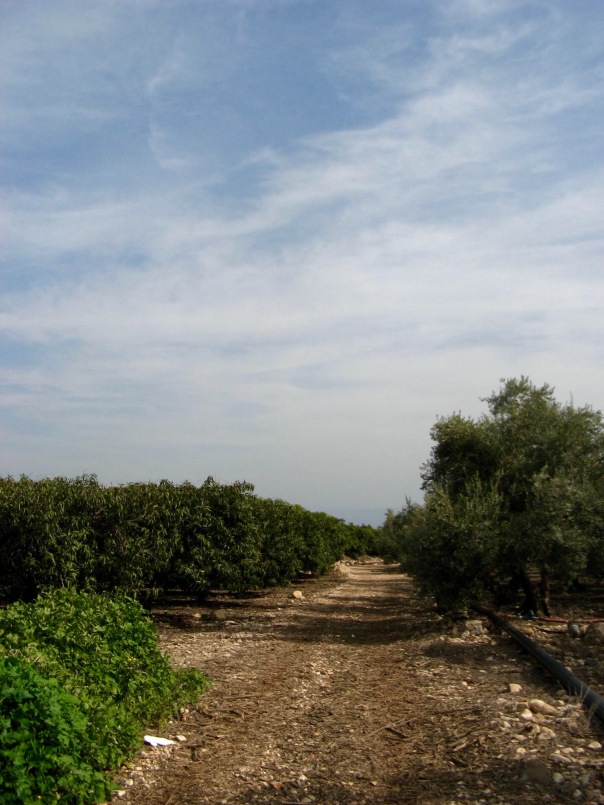 By mid-afternoon we arrived at Tabgha, which is a variation of the Greek name Heptapegon, meaning Seven Springs. We are staying at the Karei Desche Guest house and Youth Hostel, right on the northern shore of the Sea of Galilee, which is not actually a sea, but a lake. There are teenagers everywhere.

There is no actual town here, just the historical sites and ruins. This is the place where Jesus fed 5000 with five loaves of bread and two fish. A church was built at the site in the 3rd century. The church was destroyed in the 5th century, and the remains excavated in the 1930s. This new church was built over the site in 1982.

A mosaic of loaves and fishes was excavated next to a large rock, believed to be the place where Jesus blessed the food. You can see the top of the exposed rock and the mosaic under the altar.

Nearby we found Job’s Spring, a sulfuric spring of warm water that cascades into the Galilee. Job was said to live in a nearby cave and bathed in the waters of the spring to soothe his sores. 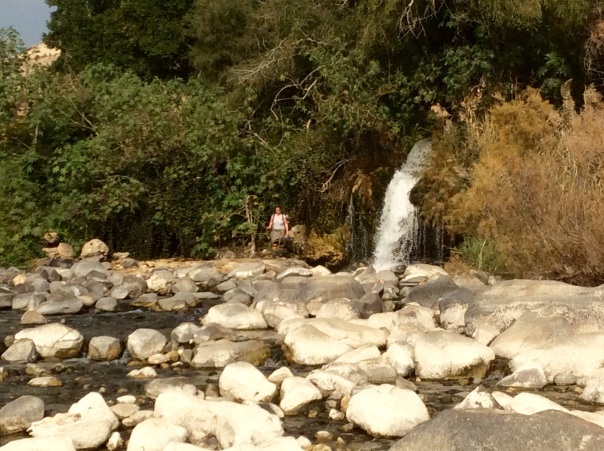