10/10 – today we walk the final 14.5 miles in to Santiago! We left around 8am (that’s about a half hour before dawn), with the intent to get as many miles in as possible before the rain started again. 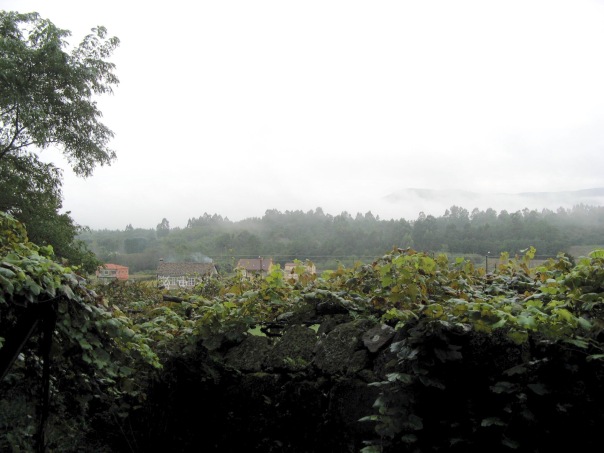 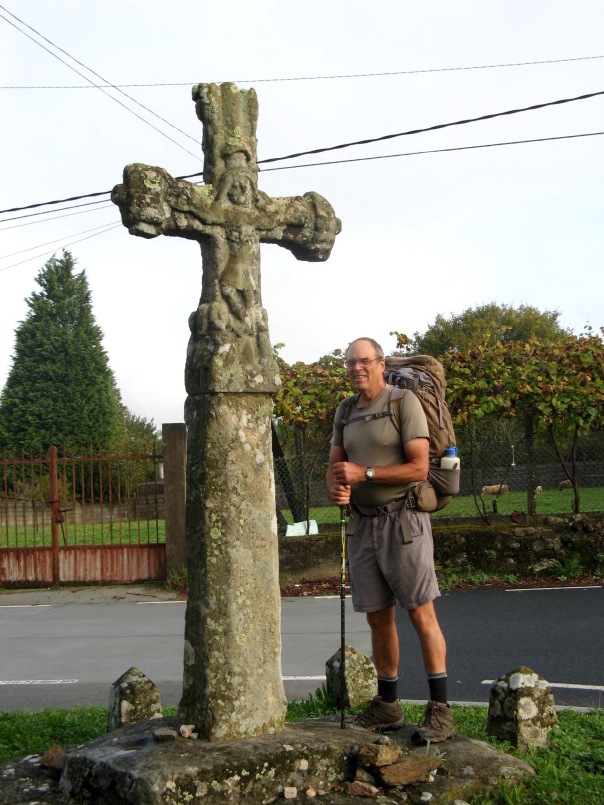 Around 11 a cold wind blew… then it passed over and we could actually see blue sky! It was exciting to see the markers count down to single digits: 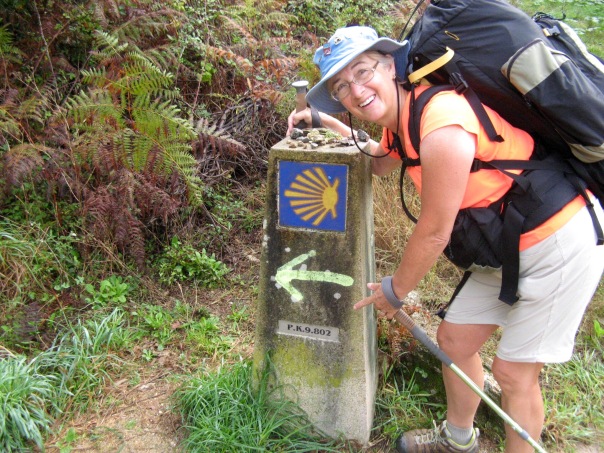 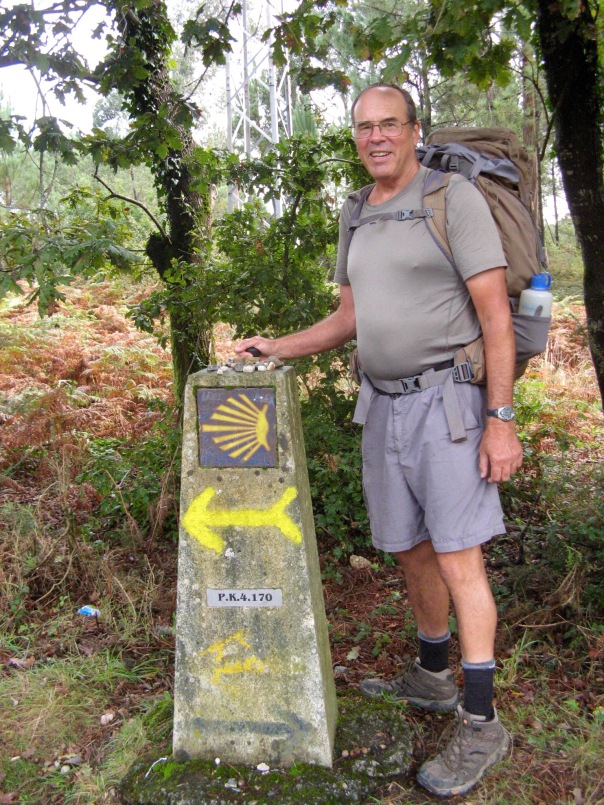 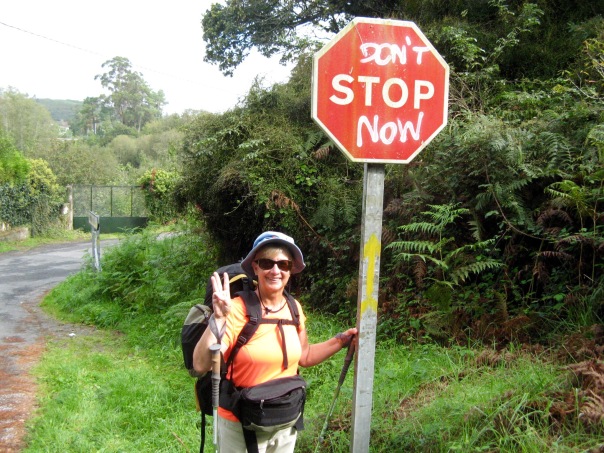 We found our hotel, showered and rested, then walked down to the old city to see the Cathedral. 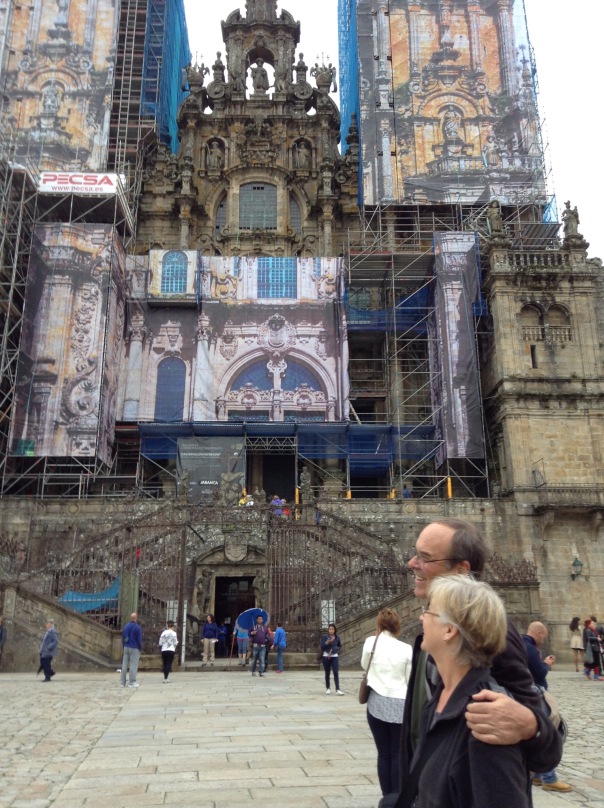 It was covered in even more scaffolding than the last time we were here in 2011, but looked beautiful to us, even though the rain was coming down again.

10/11 – In the morning, we got into the queue to get our Credencial, the official document that says you have completed your pilgrimage. 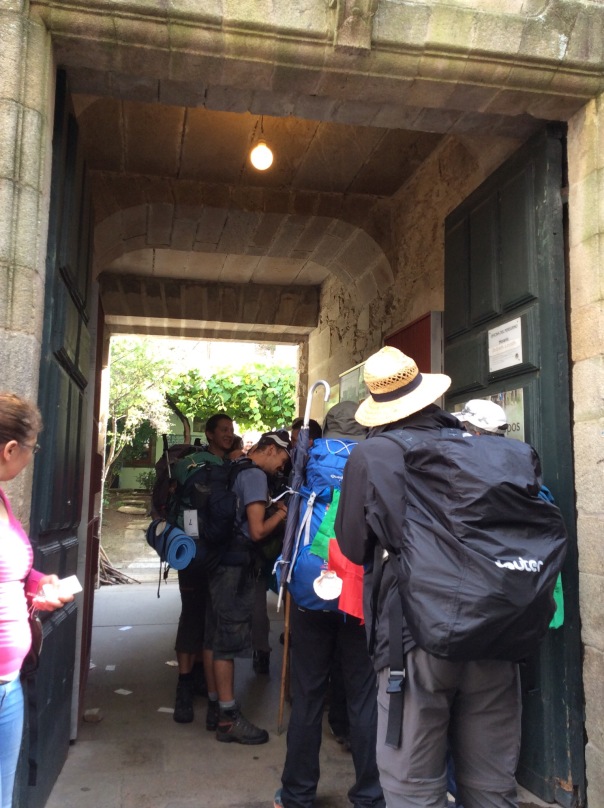 You do this by showing your record of dates and places you stayed and ate along the way. This record was as important as our passports – I’m going to feel like something is missing if I don’t have to ask for a stamp every night!

An hour later, we had our certificates: 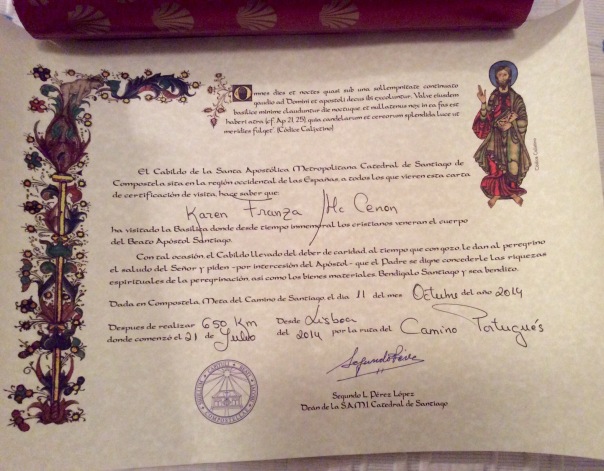 . We didn’t realize until we got home that the clerk had entered the wrong start date, 21 Jul instead of 21 August. That officially makes us the slowest walkers on the Camiño!

Then we headed back to the Cathedral for the Pilgrims Mass at noon. We got there just in time to snag two seats in the front section nearest the altar. 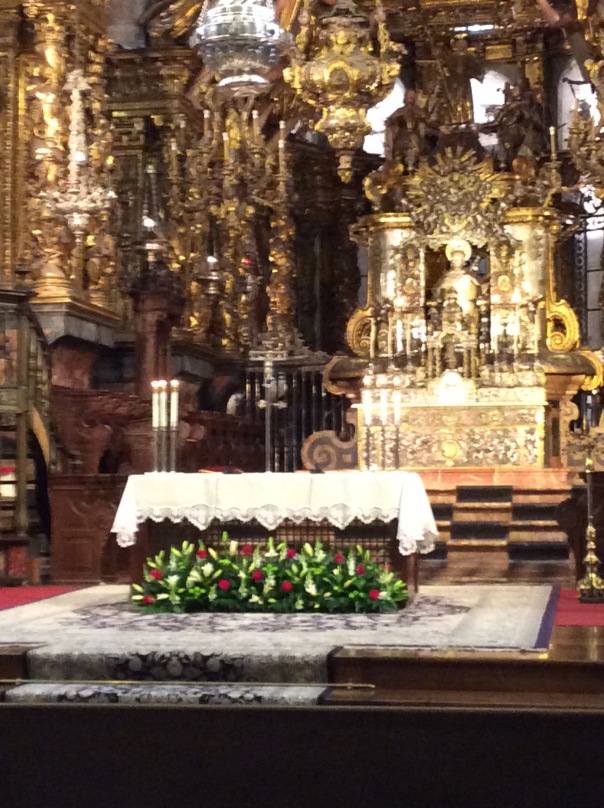 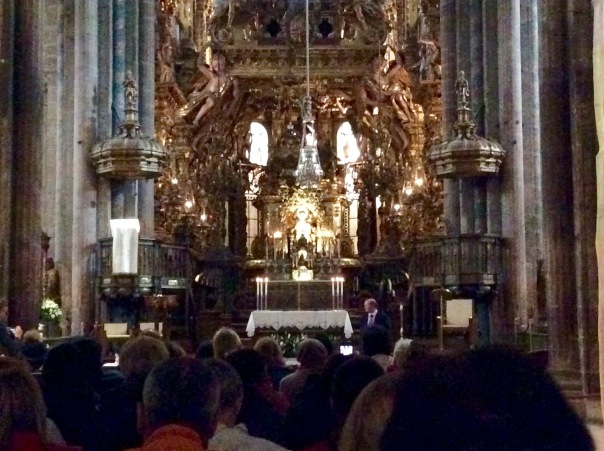 The mass is totally in Spanish, but you can hear when your country and your Camino is mentioned. A nun with a beautiful soprano voice led the sung responses, and a choir sang during communion.

At the end of the service is the moment everyone waited for: with organ rumbling and choir singing, eight sturdy deacons hefted the world’s biggest thurible (incense burner), el Botofumeiro, and set it swinging across the cathedral. Word is that this tradition started because the pilgrims smelled so bad, but now it is the highlight of the pilgrim service, and is a wonder to behold. A pic doesn’t do it justice – go to YouTube and see any number of videos. Jim will post one soon on his blog. 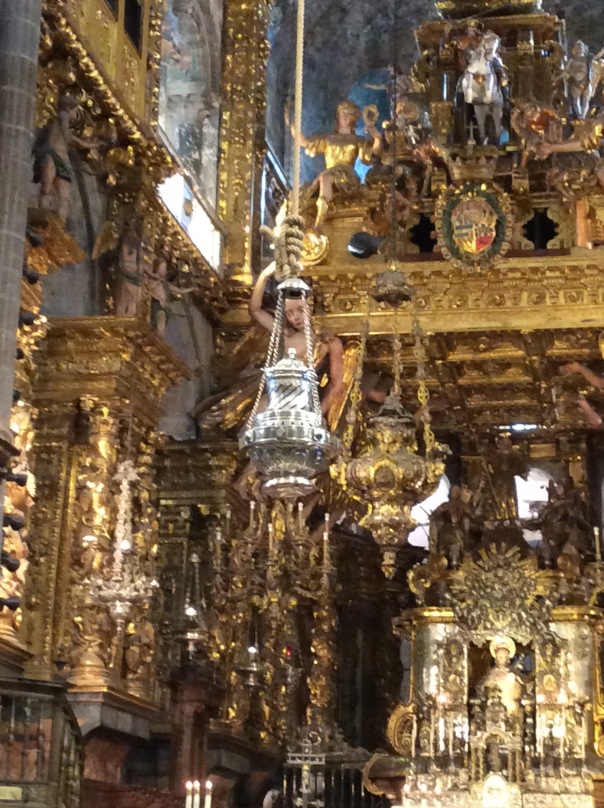 After the mass, we took our turn climbing the steps behind the altar, to wrap our arms around the golden statue of Santiago and thank him for our safe journey: 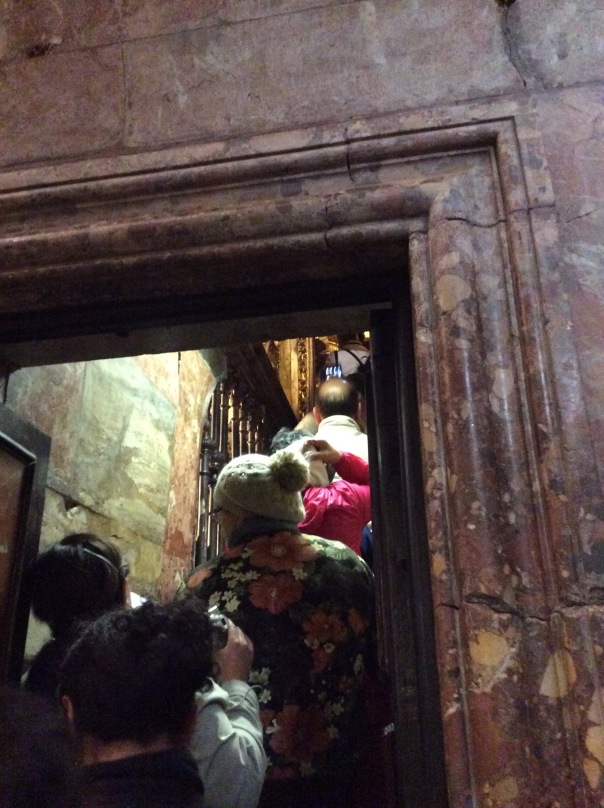 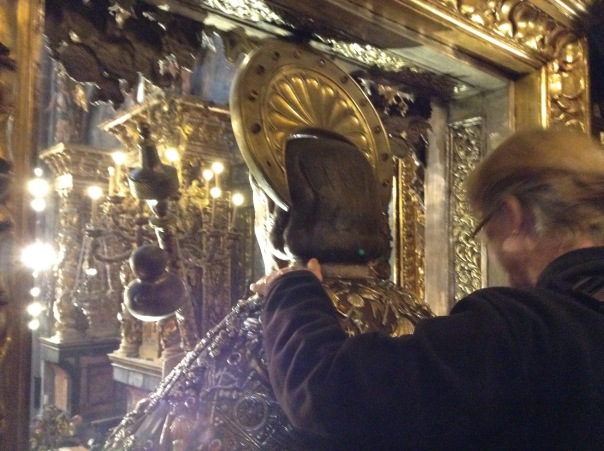 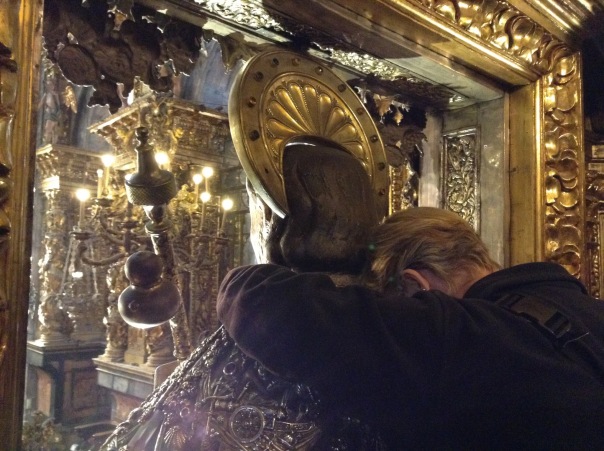 Then down to the crypt, to kneel before the bones of James, son of Zebedee, Apostle. 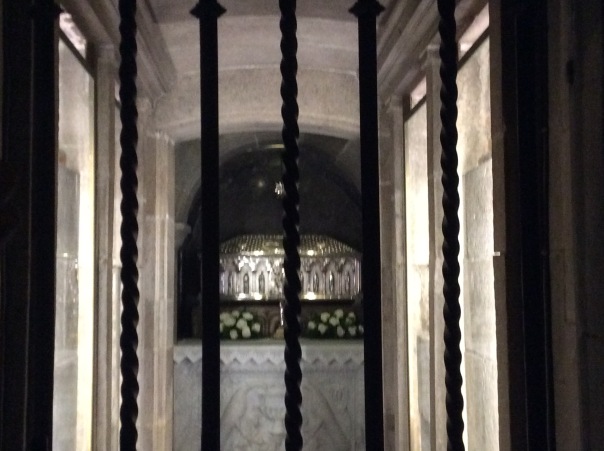