5/27 – We enjoyed our short stay in Siem Reap.  The heat of the day was broken by a short afternoon rain (we are in the beginning of monsoon or wet season) so we were able to walk around and see some of the city.  When we were in Thailand, there were three seasons; the hot, the wet and the dry.  Here in Cambodia there are only two seasons; the wet and the dry.  It is always HOT. There are lots of restaurants and bars on Pub Street.

It’s a wonder that the electricity works at all in Asia.  Every town has a similar challenge with wires.

Although drugs are illegal here, marijuana is exempt because it is an herb used in cooking.  It is an ingredient in Happy Pizza and other Happy dishes. I wonder what they put in Ecstatic Pizza?

Isn’t this a good name for a laundry?  Someone has a sense of humor. 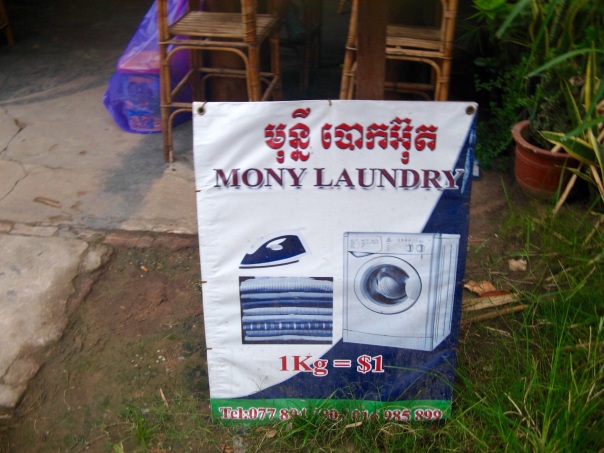 Lots of markets.  Anyone need a crocodile?

5/28 – Today we hopped on the bus for the six hour ride to Cambodia’s capital, Phnom Penh. This bus had a hostess with a microphone who announced our itinerary in both Khmer and English, and played an endless loop DVD of Cambodian crooners singing love songs to adoring girls in long dresses and beehive hairdos.

About two hours into the trip, the paved road became a dirt road. We understand that as the wet season progresses, many roads become impassable. 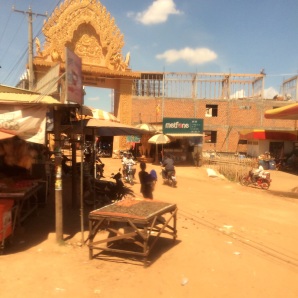 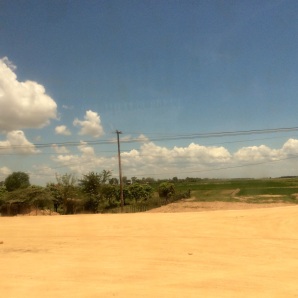 We stopped for a break midway through, and Jim wanted a snack. The roadside snack shack specialized in fried bugs (grasshoppers?), so he bought a bagful. 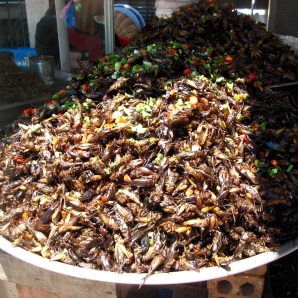 For the record, he said they were crunchy and very tasty, sort of like Fritos. I will take his word on that!

The rest of the ride was uneventful, but the sky was awesome, so here are some cloud pix. As we neared the city, the road became paved once again. 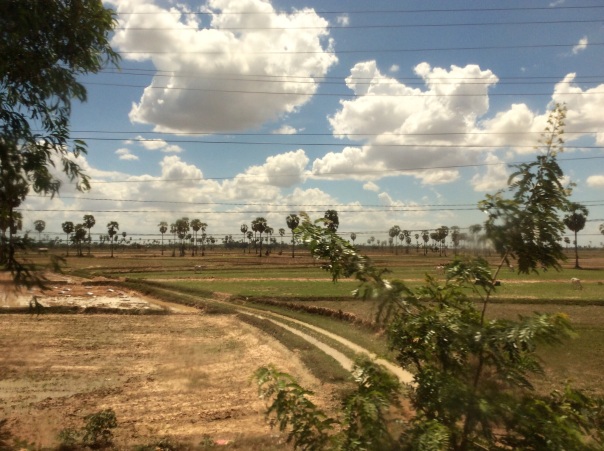 And now we are in our cozy guesthouse with another awesome pool!