2/20 – Last day in Astana. The temperature got into the positive single digits today! Jim was worried about the effect the jouncing of the train would have on my sore arm, so he found a small pharmacy inside a clothing shop, and asked for pain medication. He came back with a tube that I was hoping was a topical analgesic, but turned out to be flesh-colored makeup to cover bruises, called Bruise Off! Such are the adventures of communication in foreign languages – and thanks to Google Translate for letting us know what we bought.

There is an English language school in our hotel, so we stopped in to talk to the students and teachers. They all agree that English is a good language to know if you want to travel. Someday, they would like to go to London and Paris. 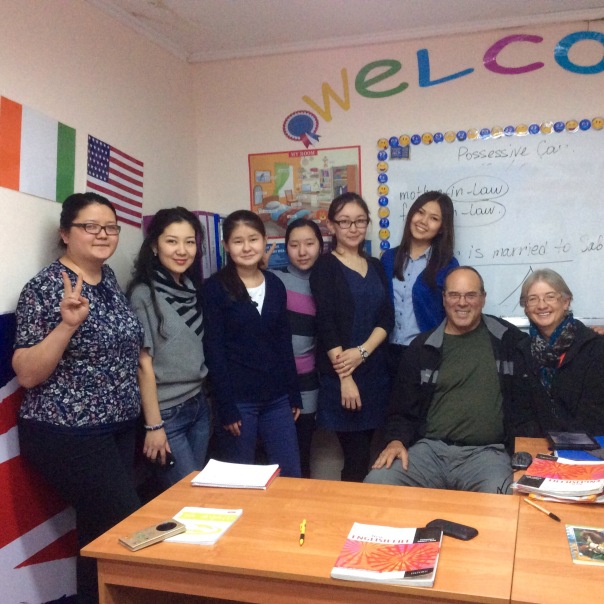 We negotiated with the front desk clerk to keep our room until 3pm. Our express train leaves at 6:30pm for the overnight ride to Almaty, our last stop in Kazakhstan. We’ll just hang out in the train station until it’s time to board. Here’s the train station in the light of day.

We boarded our express train, and had our compartment to ourselves. After watching the miles roll by in the dark, we locked the door, got undressed, and turned out the light. At about 10:30pm we heard a furious pounding on the door. Uh oh, guess we’ll be sharing our compartment after all! Jim opened the door, and a woman in furs and high heels rolled a big suitcase into the tiny compartment. She started shrieking in Russian, waving her arms about, until the train attendant came and yanked her out. Evidently, she did not intend to share space with two undressed Americans, and suffer the indignities of climbing into an upper berth. A minute later, a young Kazakh man came in to take her place. He vaulted into the upper bunk, and all was well.

The train arrived in Almaty at 7:30 the next morning. We went to the ticket office to secure our next tickets, to Urumqi, China. We read that we could save 8 hours of this journey by taking a series of buses, but we are comfortable with the train. There was only one ticket window open at this early hour, and the woman, who had no English, communicated that we needed to get our tickets from Window 7, which would open at 8am. When no one opened Window 7 at 8am, we went to the station cafe and had some breakfast, then returned. Window 7 still dark. We asked at all the other windows, and were told by each that Window 7 was the only game in town for tickets to Urumqi. We went to the Information booth to ask when Window 7 would open. The info lady walked with us back to the darkened window and read a note in Russan on the glass. She pointed to where it said 11:30. Oh no! We were punchy from too little sleep, and decided to go find our hotel and come back later. As we were shouldering our packs, she came back with an update – 9:30. It was already 9 o’clock, so we sat back down to wait. Sure enough, at 9:30 the little window opened, and we got our tickets. The train to Urumqi only runs twice a week, and leaves at midnight. As the Chinese New Year celebrations are still going on, we felt lucky to get the tickets.

We walked out onto the street, through the gauntlet of men muttering “taxi” under their breath. Evidently, they are not licensed taxis, so try not to call attention to themselves. Jim chose one, and showed him the address of the hotel and a hand-drawn map showing where it was. It’s been our experience that taxi drivers have no idea of where you want to go, and if you don’t direct them, they are happy to drive around all day, running up the fare.

We arrived at the Mark Inn Hotel, to find a construction zone. The reception area was filled with Sheetrock, and there was hammering, sawing and piles of debris everywhere. There was no one to check us in, and the owner was not on site. One of the workman called him and we spoke on the phone. Seems there was a fire, and they were trying to rebuild. Our room was fine, if you like noise and dust… Always an adventure!