Feb 9 – When we awoke this morning we still had no electricity thanks to last night’s wind storm, but it didn’t affect us too much: the stove runs on propane, so the coffee was hot and the breakfast was delicious as always. The plants and chairs up on the terrace all blew over, but these things are easily fixed.

After breakfast, our host Sara let us know that the booking we thought we had made for four additional days at Casa Kaktus did not go through properly (it showed up in March instead of February – this has happened before on booking.com), and we would have to leave, as they are all booked up. Drat! She suggested we try La Casa Rosa, a regular hotel right on the lake that might have a room. Unfortunately, there is no other place in Santa Cruz that has a kitchen that guests can use. And we just bought four nights worth of groceries! Sara graciously offered to let us continue to use the kitchen, even though we would not be sleeping there. So nice.

La Casa Rosa is run by a native family, and is a lovely place, with lush gardens and seating right on the lake. We secured a room with a private bath. We’ll miss the camaraderie of Casa Kaktus and the daily breakfasts, but I think we’ll be okay. 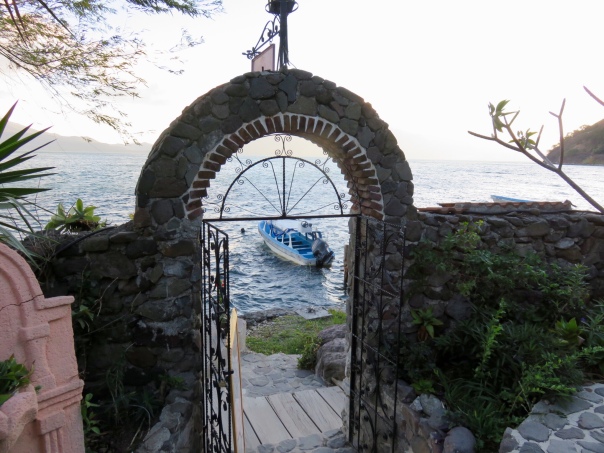 Remember our little dinner party last night? When Jim was slicing vegetables for his spaghetti sauce, he sliced his thumb pretty badly. He bandaged it up and carried on bravely, but when he took the bandage off this morning it started bleeding again like crazy. Our host Ever tried to butterfly bandage it, but suggested we go to the clinic up in town to have it seen to properly. Jim pooh-poohed the idea, saying he was fine.

We settled our stuff at La Casa Rosa, then walked up the big hill to the Mayan town for lunch. A chicken joined us for part of the journey. 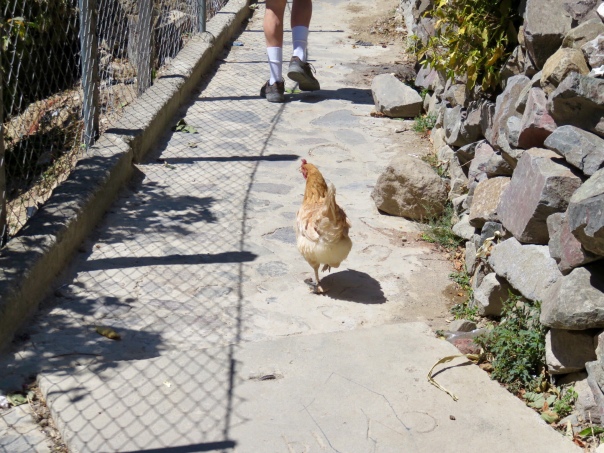 More delicious native food at the CECAP restaurant, Cafe Sabor Cruceño, where the workers are all native and the profits go the education and skills training of the local community. After our meal, Jim thought it might be a good idea to check out the clinic after all.

We walked in, and the building appeared empty. We hallooed, and a man walked out of an office. Are you open today? (It is Saturday.) Of course, he replied. Come in – I am the doctor. He unwrapped Jim’s thumb, cleaned the wound and declared that sutures were needed. He and Jim kept up a genial conversation in Spanish while he worked. The doctor is 27 years old, educated in Guatemala at the University in Quetzaltenango. He is not married. Yes, he would like to visit the US someday, but doubts that he could get a visa. Yes, the clinic is open seven days a week.

Before too long, the sutures were in, Jim was given a tetanus shot, a week’s worth of antibiotics, and some extra strength acetaminophen for pain. How much did we pay for this excellent care? You guessed it – when they say free clinic, they mean it.

We relaxed at our new home for the rest of the afternoon, then walked back to Casa Kaktus to heat up our leftover spaghetti, and catch up with Monica and Mary. And the electricity came back on!

We returned to La Casa Rosa to sit at the lakeshore and watch the sunset. 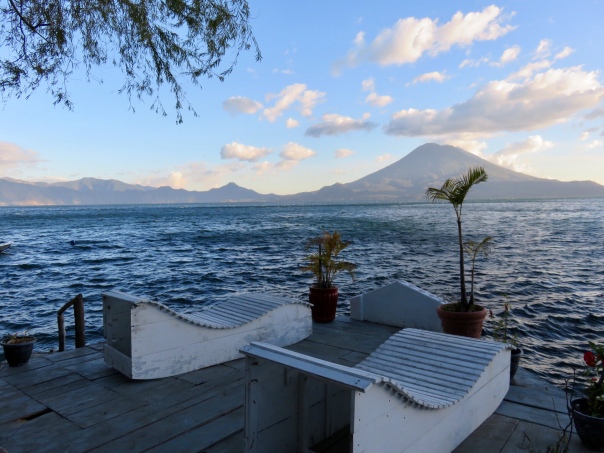 Not the way we planned to spend the day, but very nice nonetheless.

Feb 10 – Jim spent a restless night and was in considerable pain this morning as his thumb starts to heal, so today we will stay local and take only a short walk to visit the Enchanted Forest here in Santa Cruz.

We walked along the lakeshore for a while. 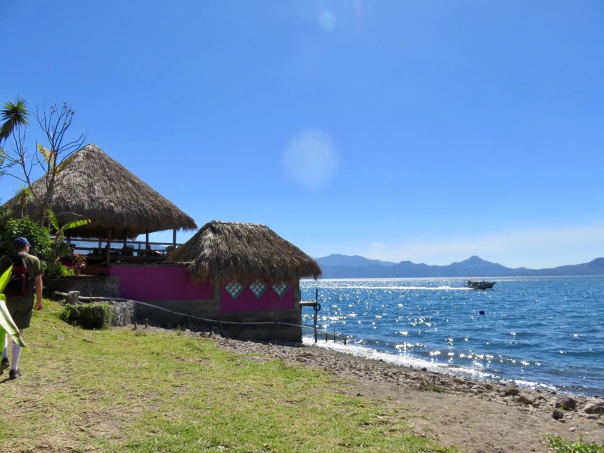 Then uphill into the trees. 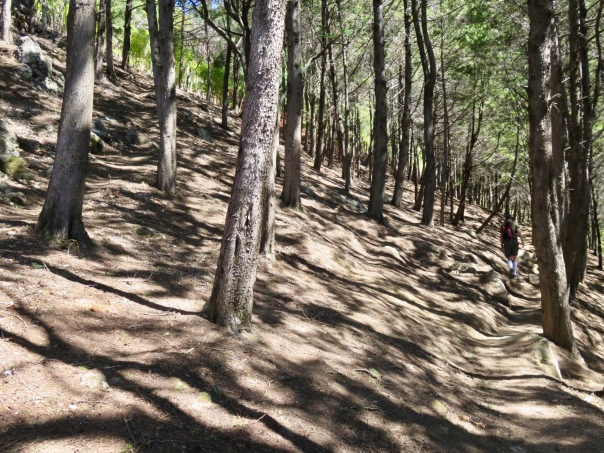 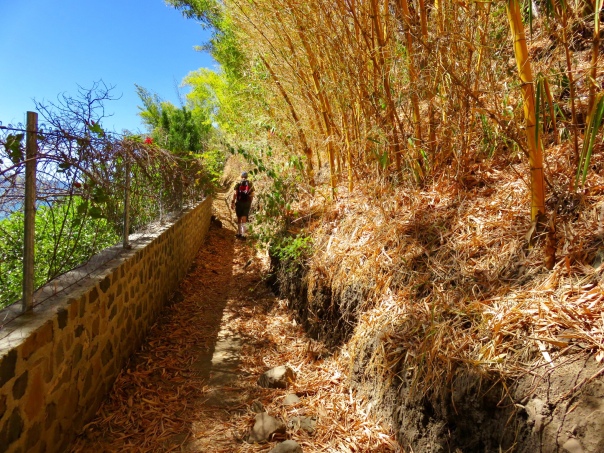 The path meandered past several grand houses in the hills, all behind walls and locked gates. When we could go no further, we turned around and walked back down.

We passed some native women in their traditional dress. Ever told us that all the women dress traditionally here, and there is no traditional attire for the men.

As we came back to the shore, we saw some native wooden boats.

This place has been changed drastically by the coming of the tourists in the last twenty years. I hope we don’t ruin it.