June 24 – Okay, I’m getting bored with these mountain climbing adventures, and I bet you are too. I can’t help it – every day there’s another mountain!

Grasmere was the birthplace of the poet William Wordsworth, and his childhood home is a museum here. Many of his poems were created as he ambled among the very same mountains that we are walking. I wandered lonely as a cloud, that floats on high o’er vales and hills, when all at once I saw a crowd, a host of golden daffodils.

Wouldn’t you like to live right here by the quiet mountainside?

Today was more of the same, only a bit easier, as the walk had some switchbacks and we got to contour along the side of the hill instead of climbing straight up along the steep sheep paths. Or maybe I’m getting stronger? 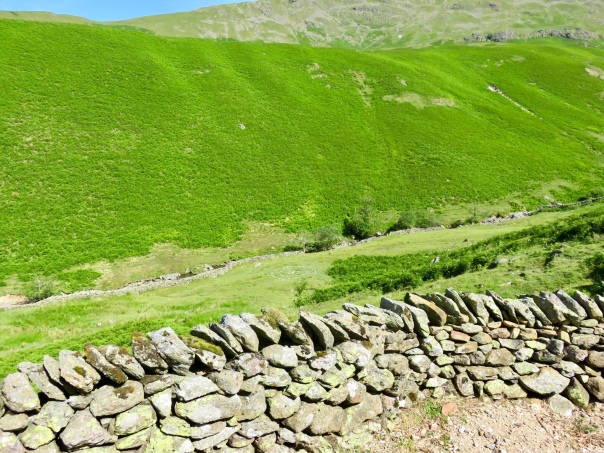 We met a couple from California, Becky and Jerry, who were actually walking as slowly as we were. We took turns passing each other all day.

Today was the warmest day so far, and sunny. Hey, what is that? A crop circle?

At the top of today’s crag, we found a tarn! I didn’t realize I’d have to learn another language to do this walk. A tarn is a small mountaintop lake. See the campers at the shore? I wonder how they got there.

Not pictured are some others who passed us on the trail: two mountain bikers who skidded and fell down the stony paths, two joggers who literally bounced down over the rocks, a couple from Spain and another couple from Belgium, who had both done some of the same Caminos that we did.

Walking into Patterdale, we spotted this sign. Somebody please tell Pat she could be monetizing her weekly practice time!

Now the good news. This is the last mountain climbing post, for a while at least. Tomorrow, I promise something different!

4 thoughts on “Coast to Coast – Grasmere to Patterdale”