Feb 25 – After another scrumptious breakfast (with spicy scrambled eggs and papaya juice), we set out to conquer the Metro. We walked to the station, which was so surrounded by sidewalk vendors that the entrance was hard to see! We charged our card with the proper fare (easy peasy) and stepped inside to study the big map of the M3 line. A young woman immediately came over and asked if we needed help – Nice Person of Mexico! She confirmed that we were headed in the right direction, and let me know that if I was traveling alone, the Metro provides Ladies Only cars for females and kids under 12 to try to mitigate sexual harassment on the trains. Found out via Google that many countries provide this service. Sad that it is needed…

The train was crowded, but not like in Japan where they have to push you in to get the doors closed! In a blink we were at our stop, and walked upstairs into another plethora of sidewalk stalls selling food, clothing, shoes, bags and religious trinkets. We could see the Basilica straight ahead. 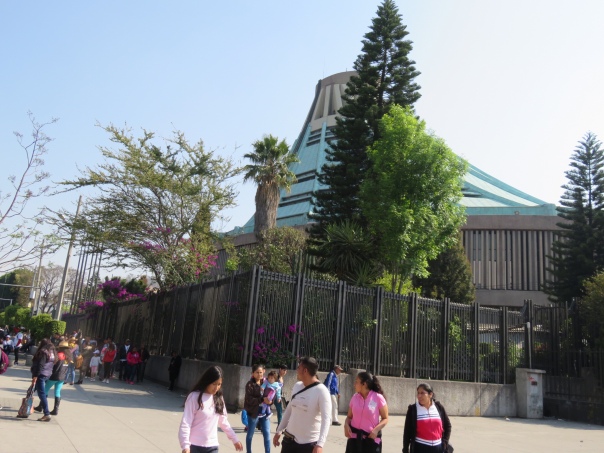 As we crossed the street, a parade with flags and a brass band marched by! I wonder how often this happens? 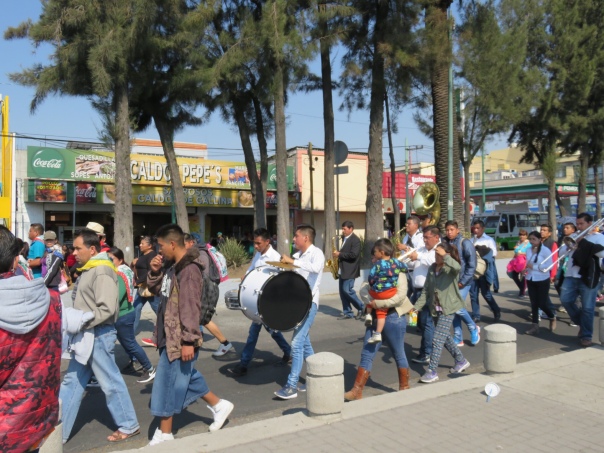 In our travels, we have visited other sites of Marian visions: Lourdes in France, Fatima in Portugal, Medjugorje in Bosnia-Herzegovina. Our Lady of Guadalupe is the #1 most visited Christian pilgrimage site in the world, hosting over 20 million people each year. Here’s the story in case you are not familiar.

In 1531, a poor Aztec peasant named Juan Diego was visited by a Lady who instructed him to have a church built on the place where he stood. 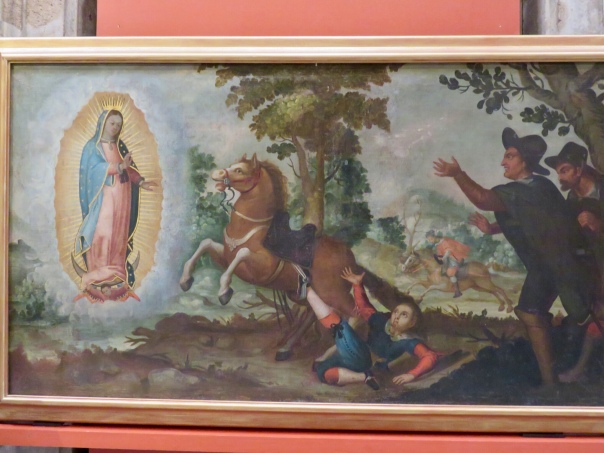 He told the local Spanish bishop, who did not believe him. He reported this back to the Lady, who told him to go ask again. This time the bishop told him not to return unless he could bring back miraculous proof. When he told this to the Lady, she sent him up the hill to gather Spanish Castilian roses, which were not native to Mexico and definitely would not be blooming in December. He gathered the flowers in his cloak, and when he opened his cloak in front of the bishop, the Lady’s image was miraculously imprinted on the cloak. 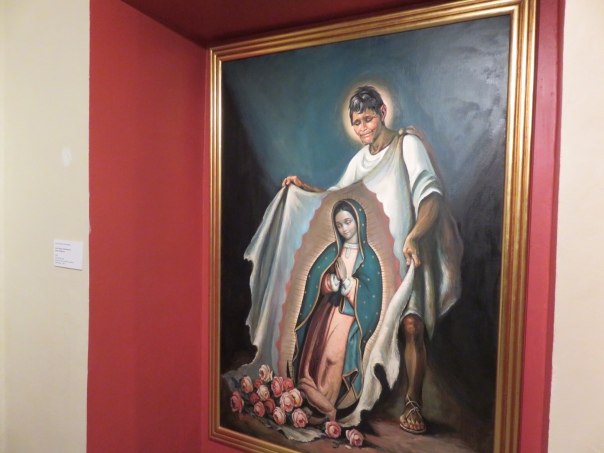 The image of the Lady with dark skin and black hair, wearing an Aztec gown and black maternity belt and speaking the local Aztec language really wowed the natives, and millions converted to Catholicism in the next decade. The cloak, made of rough hemp, has not degraded despite being handled for 500 years.

We took a moving walkway past the cloak, which is mounted high up on the wall of the new sanctuary, where mass is said 24 hours a day. 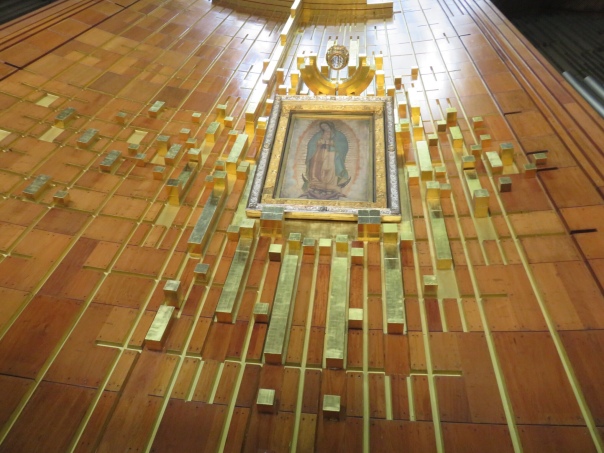 The new sanctuary is huge, and was totally packed with worshipers kneeling and singing. 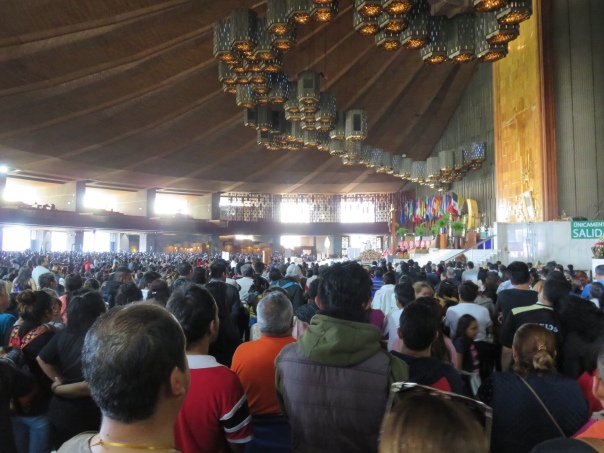 In the museum, there were lots of other images of the Lady. 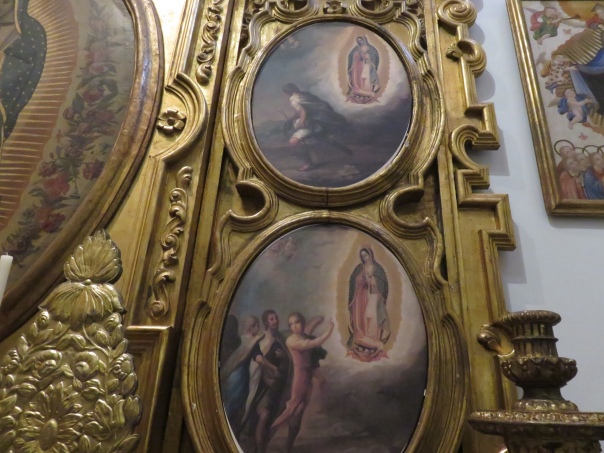 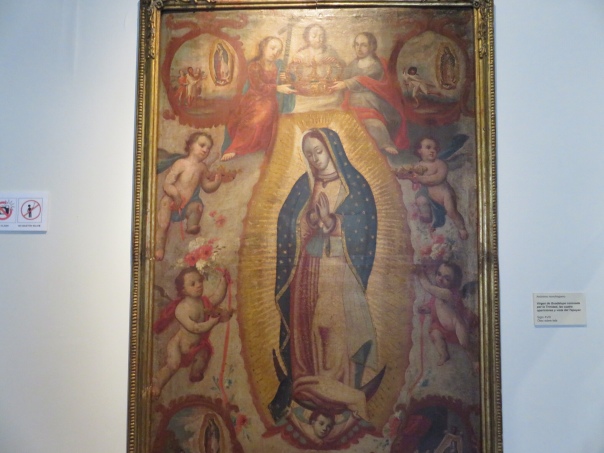 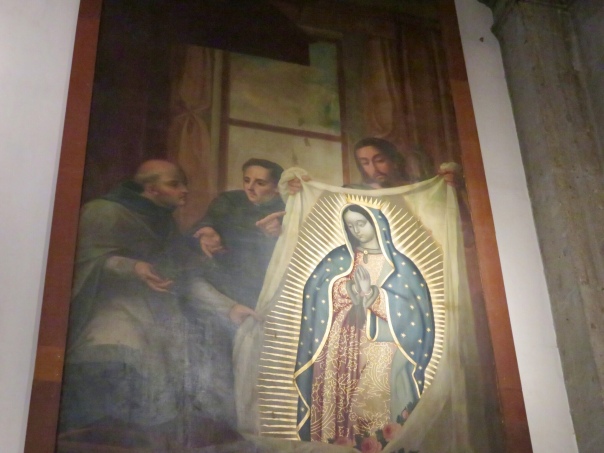 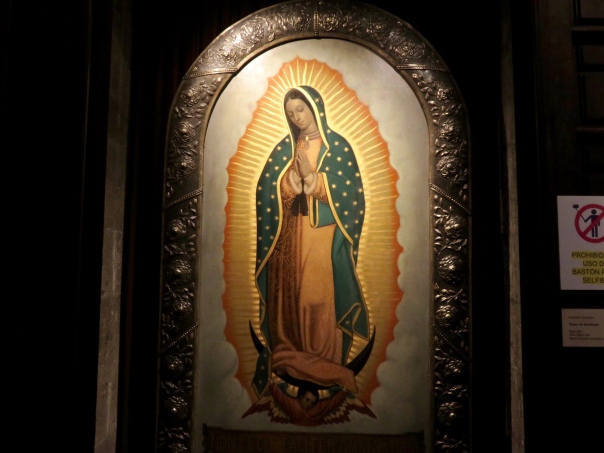 We walked up the hill to the old sanctuary, where natives were chanting and dancing. 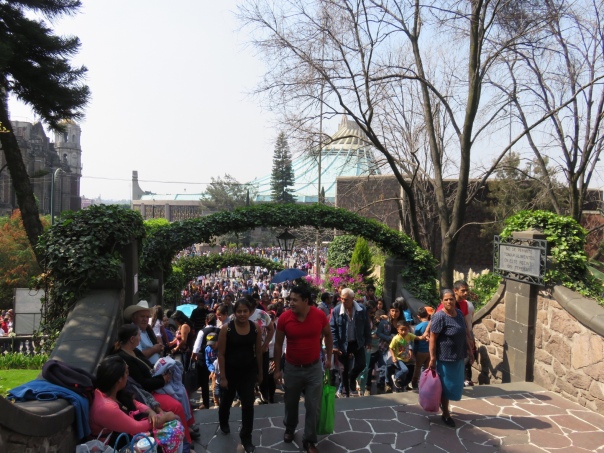 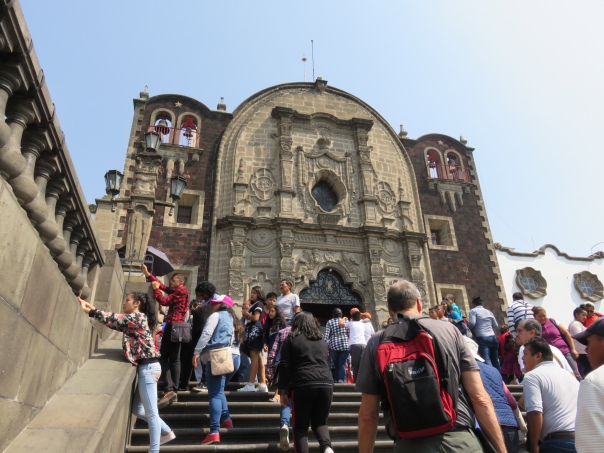 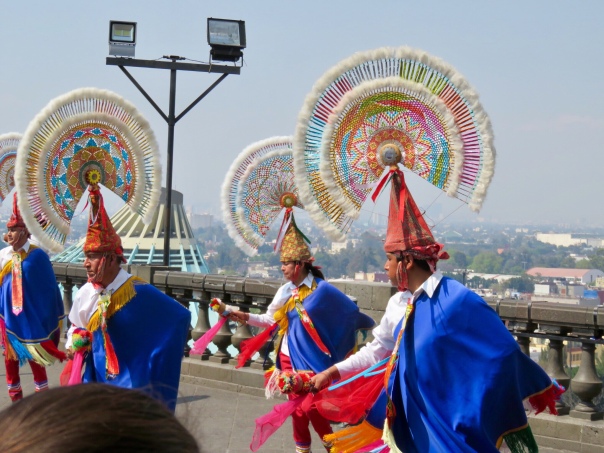 The old church was small and crowded with people just walking through. 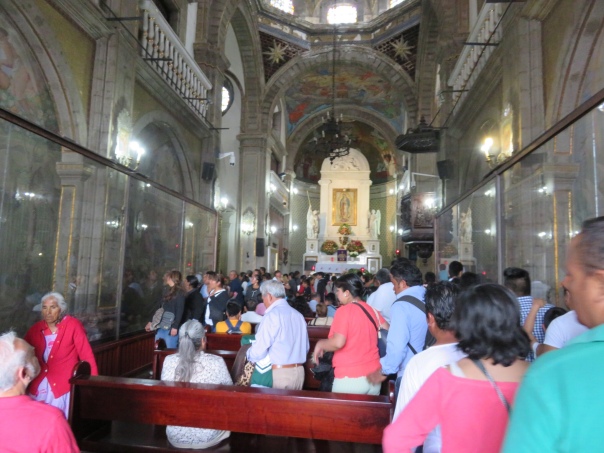 We saw the exact spot where Juan saw the Lady. We 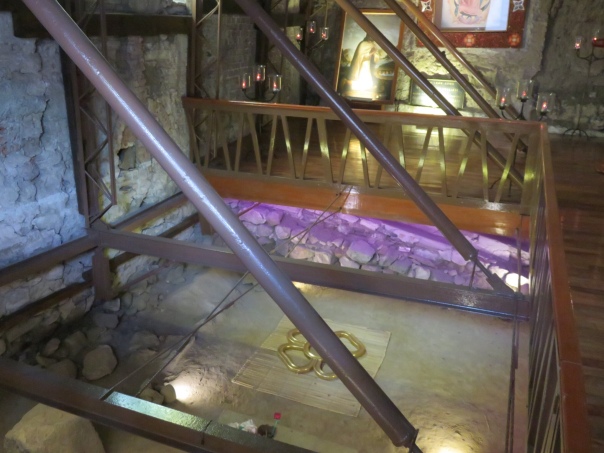 Unlike other Marian pilgrimage sites that welcome visitors from all over, all the signage and the masses here are in Spanish. With the exception of one Korean group, we saw few foreigners. We did see many babies and young children dressed in white, brought here to be baptized. 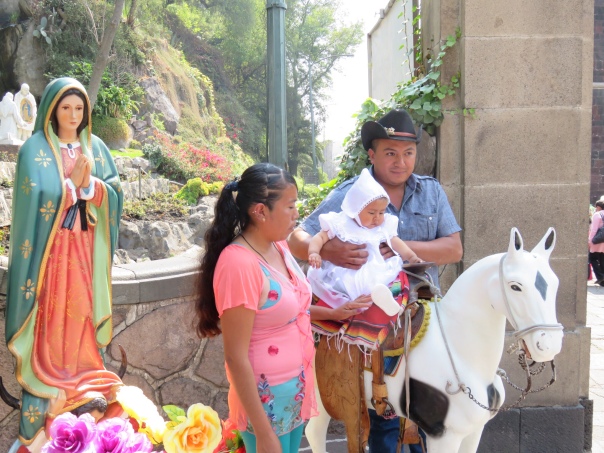 The walk down the hill. 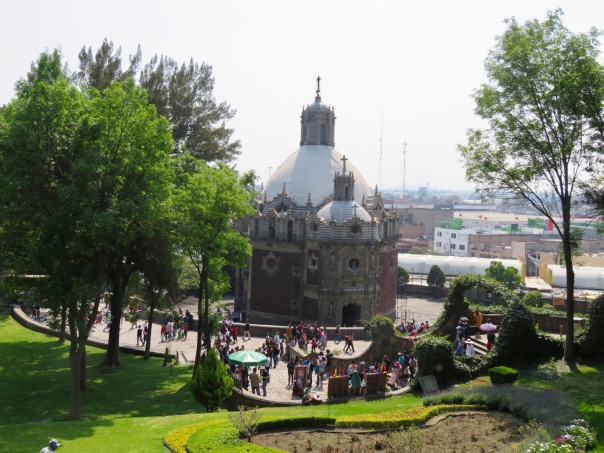 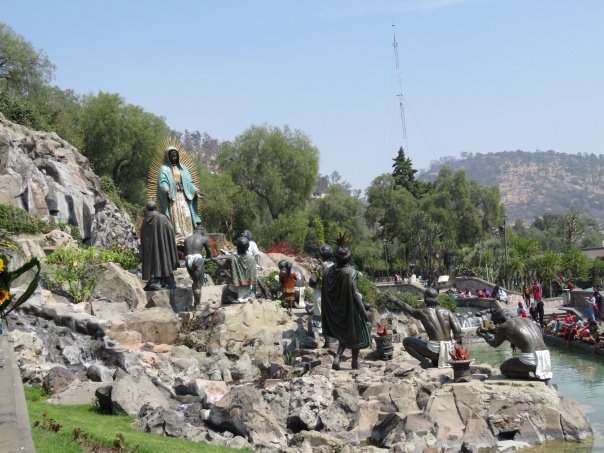 The Words of the Lady inscribed above the door, “Am I not here, I who am your Mother?” 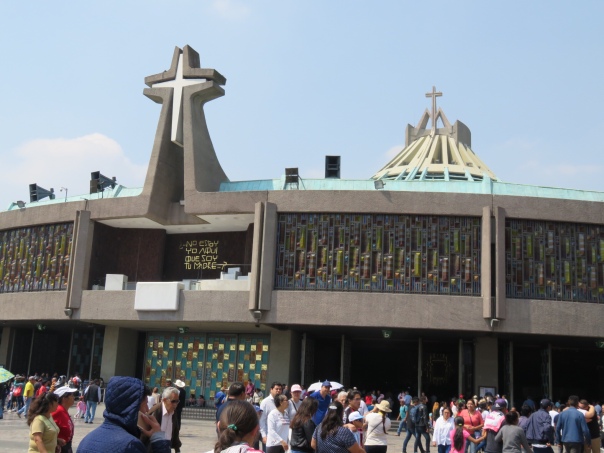