4/12 – As we prepared to move from Laos to Thailand, we researched our options. From Vientiane, we could get to Chiang Mai, in northern Thailand on a 15 hour bus ride, or we could take a short bus ride over the Friendship Bridge to Udon Thani and catch a $50.00 flight to arrive in Chiang Mai in an hour. We’re kind of over the long, bumpy bus experience at this point, so we opted to fly for a change.

Our hotel offered to sell us a bus ticket for 60000 kip, but they were only 22000 if purchased directly from the bus station, so we tuk-tukked over to catch the 11:30am bus. By 11:40, I was starting to fret, but a friendly Vietnamese man told me not to worry, as all schedules in Laos are only approximate suggestions. Waiting around gave us time to talk with a young Korean, and a male nurse from France on a mountain holiday. Sure enough, the bus came eventually, and we all got on it. Here is the very crowded bus station – you can see a manicurist painting the fingernails of a woman waiting for her bus. She got a pedicure too! 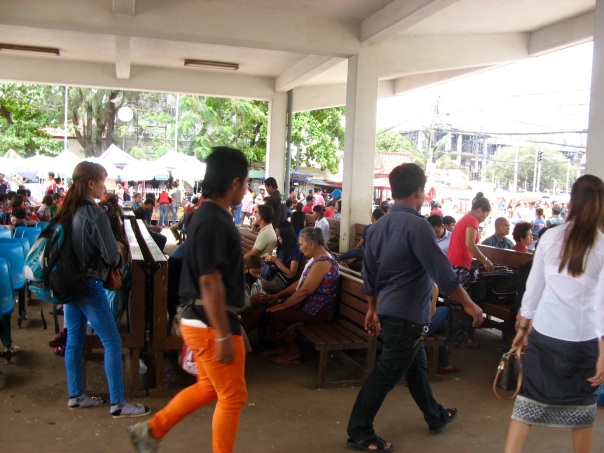 The bus took us to the border so we could process out of Laos, then the short drive to where we processed into Thailand. Remembering our experience in China when the bus left without us, we were at the front of the customs line and never let the bus out of our sight! No worries – the driver’s assistant counted noses each time before the bus closed its doors.

As soon as we crossed the border, things looked a lot more westernized, with paved roads, gas stations, car lots, billboards and 7 Elevens on every corner. I wonder if they have Slurpees here?

In less than two hours we arrived at the Udon Thani bus station. As most of us were going to the airport, Jim asked if we could all share a taxi, and the Vietnamese man took charge and bargained for a tuk-tuk that would take four of us and our bags for 30 baht each. New currency again – 1 baht is worth three cents, 100 baht about three dollars. As he spoke Thai, he was a much better bargainer than we would have been – I thought the driver’s original offer of 50 baht ($1.50) each was very reasonable for a five mile ride across town!

As we rode down the road in the open vehicle, I was suddenly drenched from behind with a bucket of cold water! I gasped in shock, and our Vietnamese friend remarked that tomorrow was the start of the Thai New Year celebration of Songkran, and we should wrap our valuables in plastic and prepare to get wet for the next three days. He said we would be doused repeatedly with water to wash away the old year and wish us luck and prosperity in the new year. Oh boy!

At the Udon Thani airport, there was a small Buddha shrine, and we watched as passengers approached to pray and pour water over the Buddha.

This ritual is the basis for the Songkran celebration – large statues of the Buddha were once carried in procession down the street, and people poured water on the statues. At some point, the statues became less important than the water, and now people just pour water on each other.

Before long, our flight was called, and we walked out to board.

Our flight on Bangkok Air was less than one hour, so I was surprised when the flight attendants came down the aisle with beverages, and astounded when they came down again with a meal! That’s just something Americans aren’t used to! Excellent meal too!

Once we landed in Chiang Mai, a metered taxi (no negotiating needed) took us to the historic part of town where our Western House hotel is located next to a wat and a block from the bustle of the Main Street. Tomorrow we’ll explore!