3/5 -Got up early for the 10km taxi ride across Lanzhou back to the South Bus Station.  We arrived at about 8:25, prepared to buy tickets for the 9:30 bus to Xiehe.  Surprise – there was an 8:30 bus that hadn’t left yet!  A little man took charge of us and hustled us through security and onto the bus.  There was nothing on the ticket that was not in Chinese, and no bus number, so we hoped we were getting on the right bus!  We took two random empty seats, and the little man came on and moved us forward so that all the front seats were filled.  Very orderly.

It soon became apparent that there were no Chinese on the bus – all the folks were speaking a different language that Jim said was Tibetan, and they looked more like Native Americans than Chinese with long braids and brown, leathery skin.
We soon left the city, passing terraced farmland. 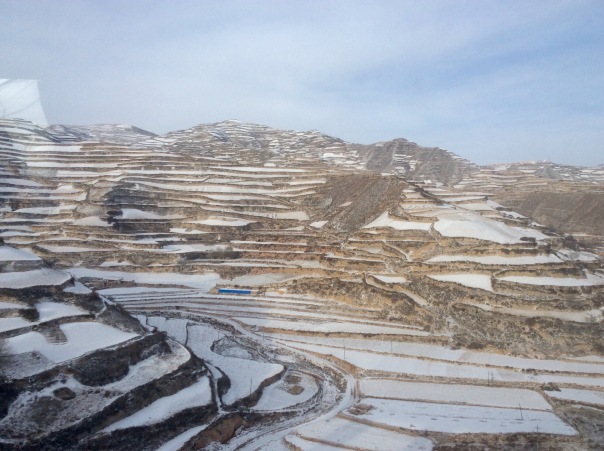 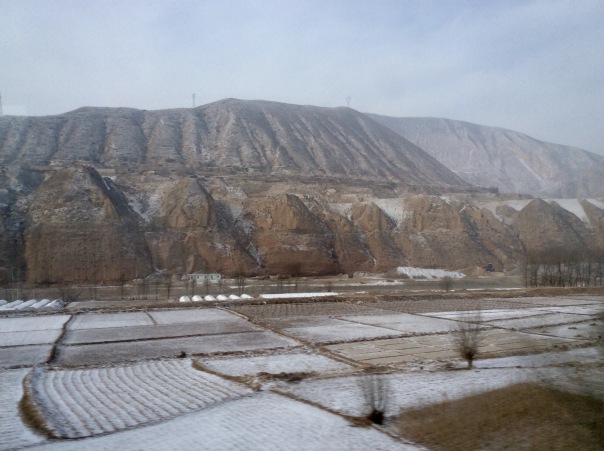 And then we were up into the mountains – Himalayas?  Without Google, I have no way of checking.  Anyway, we were heading toward the part of China formerly known as Tibet, to visit the Labrang Tibetan Monastery.
We arrived in Xiehe by noon, and hailed a taxi to take us to the Nirvana Hotel.  Jim had copied the name and address out in Chinese characters, but, you guessed it, the taxi driver couldn’t read Chinese!  Tibetan is what’s spoken here.  There was another guy in the cab, and he showed us a pic on his phone of red robed monks – is that where we are going?  Yes!  we said, right near the monastery.  He asked if we had a phone number, but we did not.  So the taxi driver picked up a young woman who looked Chinese, and asked her to read the script.  That got us onto the right street, but he couldn’t find the hotel.  Twice around the block, and I spied the name on the building in English. Stop!  Here it is! 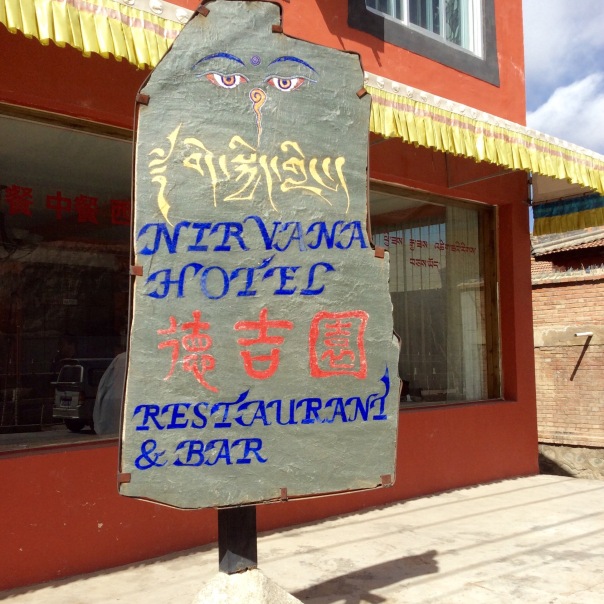 We walked into the downstairs restaurant, to the sound of The Band on the sound system, and a western woman greeted us in perfect English – are you the McClenons? We’ve been waiting for you!  To say I was overcome would be an understatement – I burst into tears at the realization that I’d be able to speak English here!  Jim thought I’d lost my mind.
We dropped our stuff off in our lovely, if chilly, room, and went back down to have lunch.  Now Bob Dylan was playing, followed by the Eagles, the Beatles, and Meatloaf!  I was in oldies heaven. We had lovely yak and vegetable soup with rice on the side, and the first cappuccinos we’ve had since Italy. Don’t wake me up, I’m loving this dream! 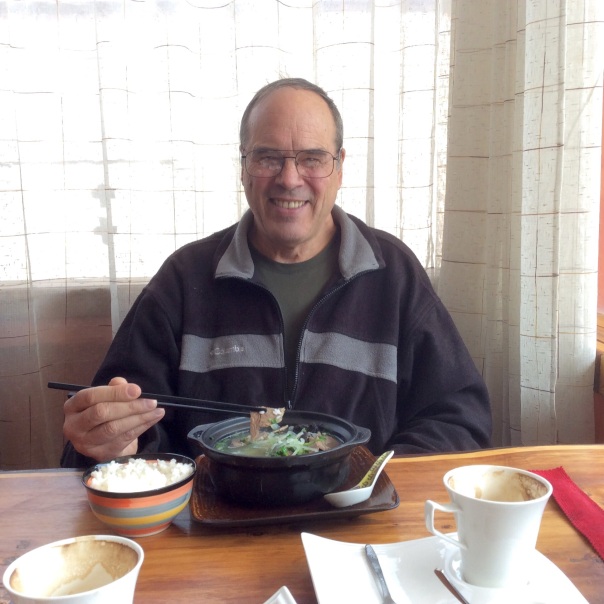 Our host Clarie, originally from Amsterdam, used to be a tour guide until she met her husband here and decided to stay and open a business.  While we were eating lunch, we met an English-speaking photographer and his wife from Shanghai, and Madelyn, an American from Oregon!  The next table over had a group of German tourists drinking beer – the first foreign tourists we’ve seen.
Madelyn had lots of info about the monastery.  Seems we arrived just in time for their New Years celebration, and tonight there will be a parade and the monks will be displaying sculptures made of yak butter!  Are we lucky or what?

4 thoughts on “Lanzhou to Xiehe, China”