10/22 – So, we all know the story of a Saint Bernadette, right? I don’t have to tell you how, in 1858, the 14 year old saw a beautiful Lady, who identified herself as Immaculate Conception, in a small cave near the river, 18 times, and showed her where to dig for a miraculous spring? And miracles occurred when the ill were brought to this spot or immersed in the water? Good. We’ve all seen the movie.

Lourdes has more hotels than any other place in France except Paris, and hosts over six million visitors a year. Despite these stats, it has an intimate quality that feels relaxed and not crowded.

The town is definitely geared to separate tourists from their money, with a wax museum and brisk trade in rosaries, statues, religious souvenirs and holy water containers:

As we walked from our hotel, we passed the cemetery where Bernadette’s family is buried:

We walked over the River Gave de Pau:

The caves where Bernadette’s visions occurred is called the Grotto: 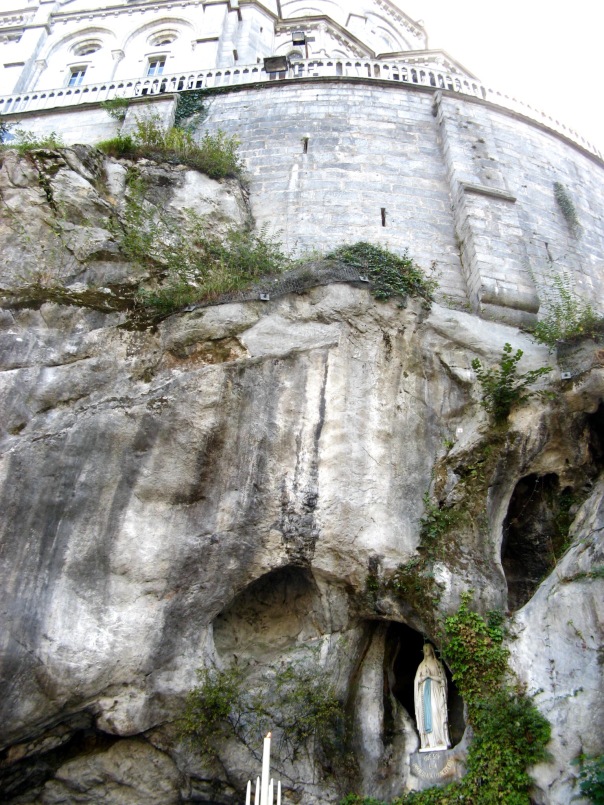 Pilgrims move slowly through, laying their hands on the rock below the statue of the Virgin. So many hands have touched the rock, that it is polished like marble: 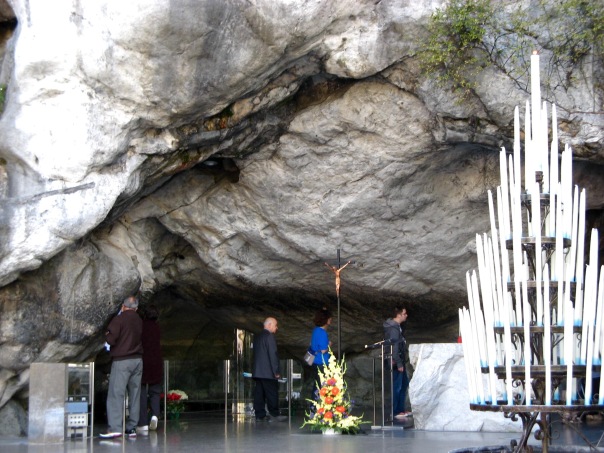 I read that when Bernadette was asked to describe her vision for the sculptor, she described a young woman of 18 or so, and short. The sculptor and authorities opted to make the statue look more like the Mary depicted by others.

In the back of the cave, the spring still flows, protected under glass:

Next to the Grotto, the spring water, safe for drinking, is available from dozens of taps. Some folks were filling gallon jugs. The water is free and there is no limit.

For those who desire a more complete experience, full immersion is offered, with separate entrances for men and women. Assistants help those in wheel chairs or on stretchers into the water. 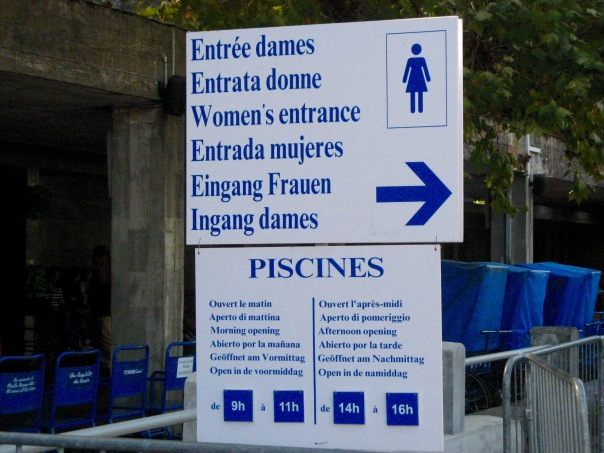 The three main basilicas are built vertically, one on top of another, all above the Grotto. The Rosary Basilica is on ground level: 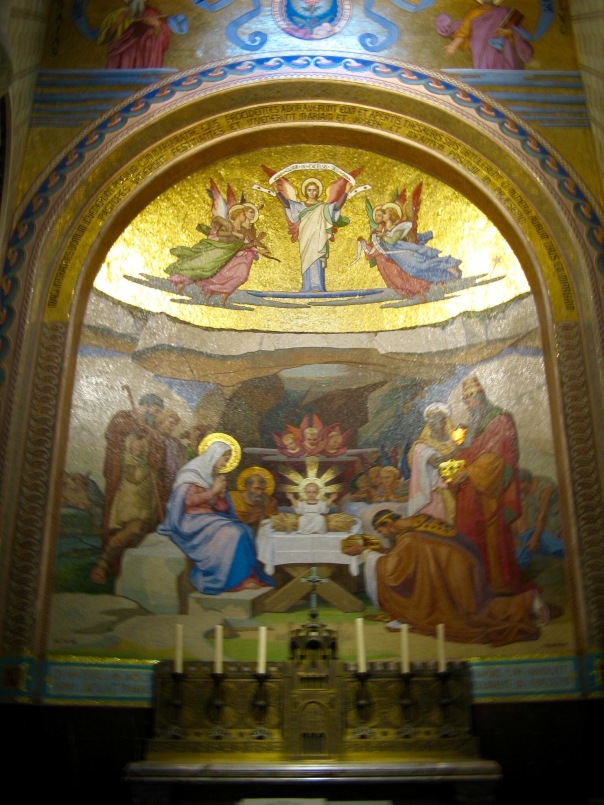 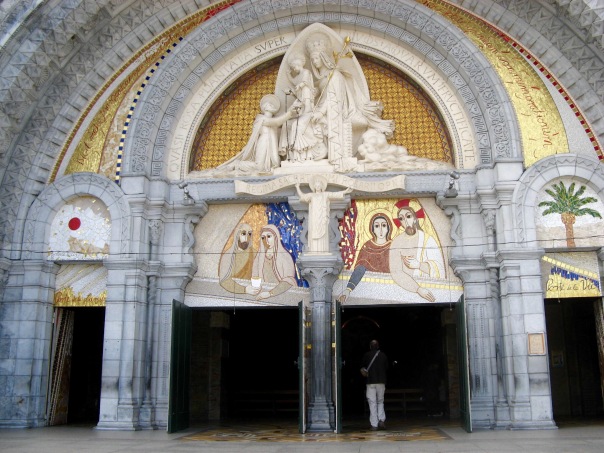 Above is the smallest and oldest basilica, called the Crypt, that contains some of the bones of Saint Bernadette. 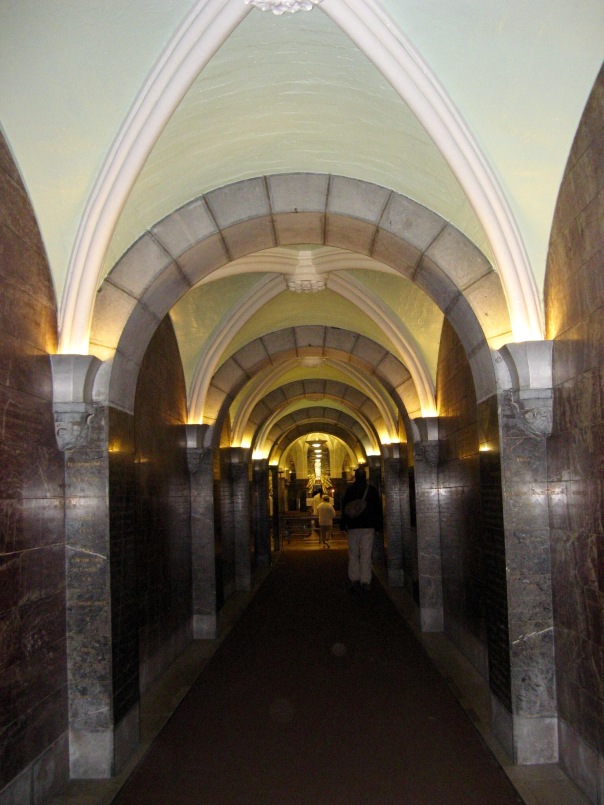 The uppermost basilica is the Immaculate Conception: 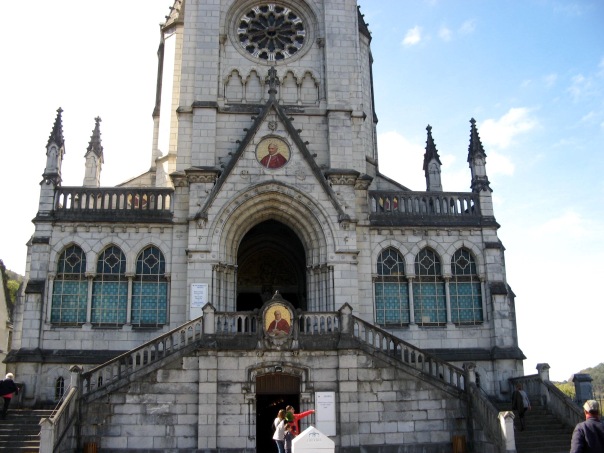 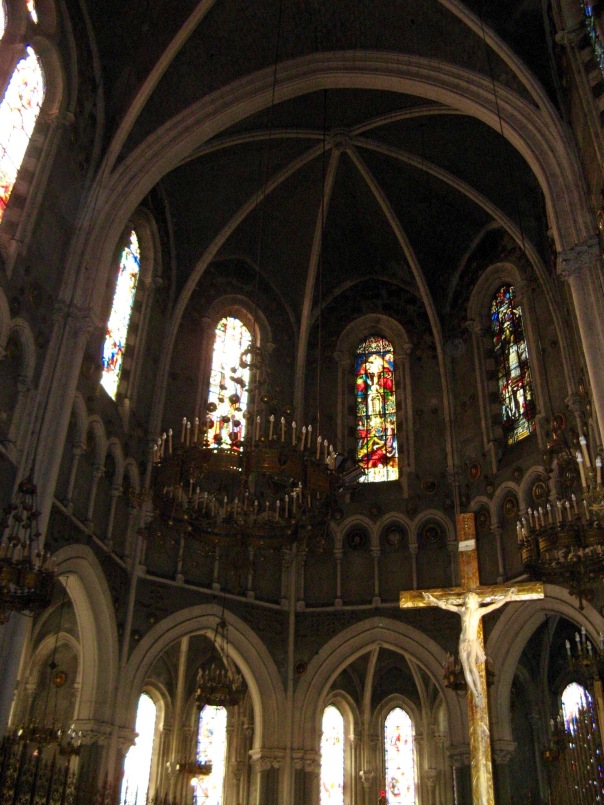 There is a fourth, underground basilica that was built in the 1950s, but it was closed. It is the least popular, and is said to resemble a parking garage.

At 9 every evening, the pilgrims process with lit candles from the Grotto to the far gate and back, chanting the Rosary and singing Ave Maria: 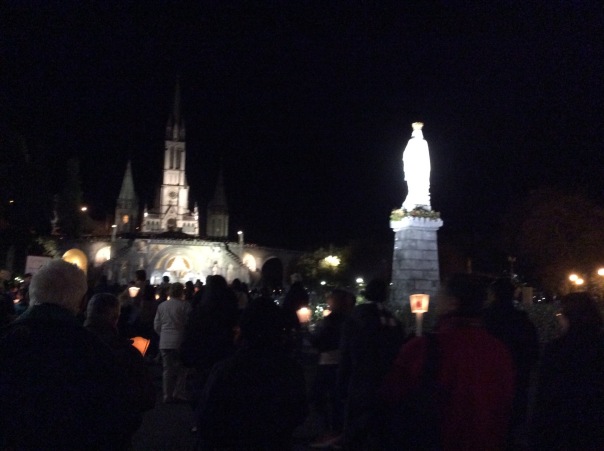 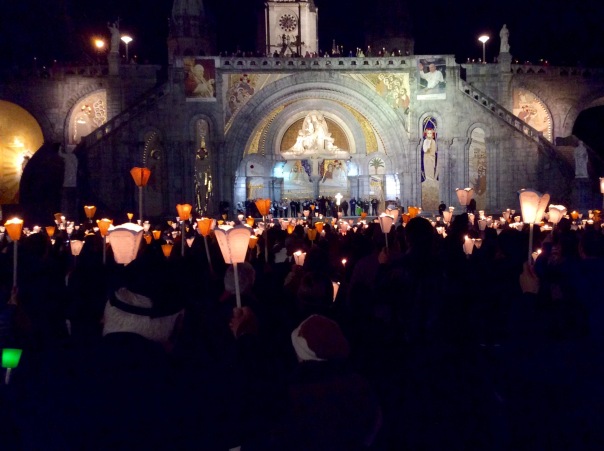 We stopped for water one more time: 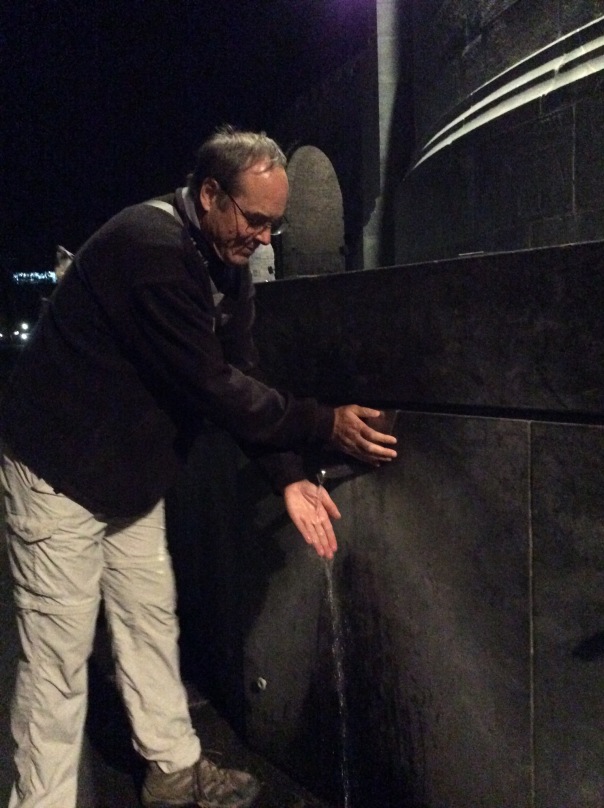 The emphasis at Lourdes is on healing, with a hospital on the grounds to care for pilgrims who arrive sick or disabled, and wheelchairs everywhere. The basilicas’ walls are covered with marble plaques purchased by those who were healed or offering thanks for a healing. A powerful day.