July 14 – We hated to leave our luxurious substitute accommodations, but all good things must end. Back to our original historic hotel for breakfast, and then we were off. Totally bucolic walk today, with no tourist stops as there was nothing to see!

It rained a little last night, which made the morning foggier than usual. We climbed hills through the Cleeve golf course, hoping we wouldn’t get beaned by a stray ball. The wooden post up the hill has a trail arrow showing us which way to go – impossible to tell the trails from the sheep paths. 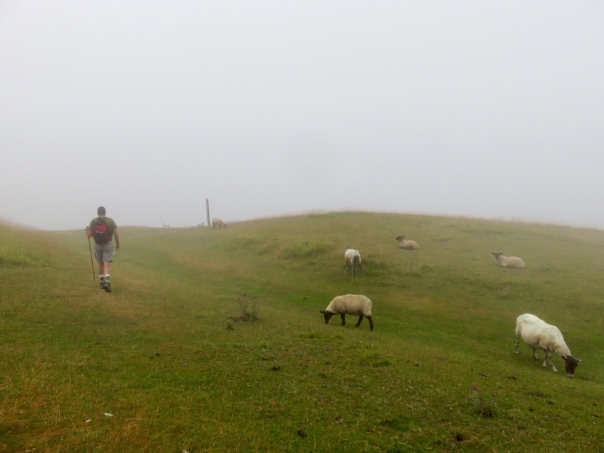 Surreal walking experience amidst the mist. Here is a scenic hilltop view. Ah, let’s sit here and admire the… fog.

Mind you, I am not complaining. Most who walk this trail throughout the year see nothing but fog and rain every day! 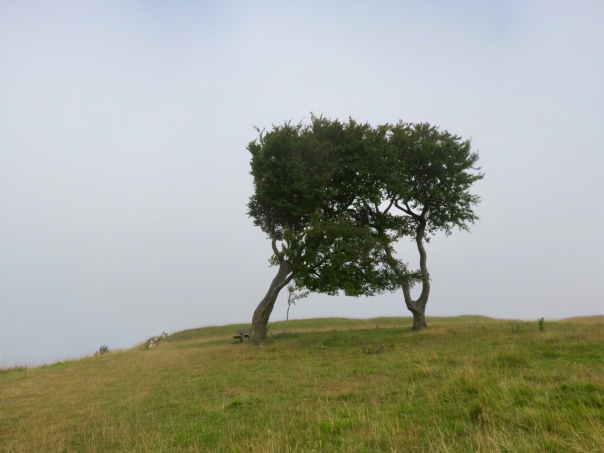 The sun burned off the mist after a while. 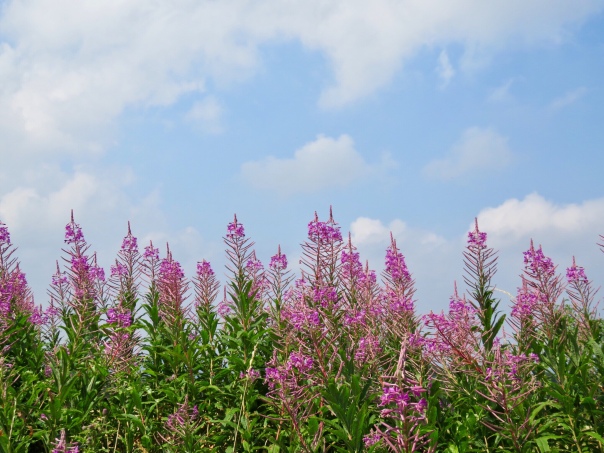 Our accommodation tonight is a room over a pub off the trail. The guide provided by our travel agent told us to leave the trail and walk one and a half miles to the pub. They didn’t mention that the walk was along a major highway with no shoulder. We jogged on the road when there were no cars coming, then dove into the scrub and cowered until the cars passed. Invigorating! The innkeeper gave us free beer for arriving alive.

July 15 – For the first time in the six weeks we’ve been here, we were not offered a cooked breakfast today. Our host provided a little fridge with yogurts, fruit, milk, juice, biscuits, cereals and porridge, in addition to the ubiquitous kettle for tea and coffee. Nice change from the full English, and it gave us control over what time we set out in the morning. Knowing that we had to do that mile and a half death jog back down the highway, we opted to leave at seven and hope that the Sunday morning traffic would be light. We lived to tell the tale. 12 miles today to the village of Birdlip. You can’t make these names up!

Spent the morning walking the ridge that looks down on the city of Cheltenham. We’ve gazed down on it from all angles, but will not actually visit Cheltenham.

Lots of families, bikers and dog walkers out enjoying a beautiful Sunday. Some pretty flowers.

At the top of Leckhampton Hill was a toposcope, showing what lies below in every direction.

We passed an old quarry area. 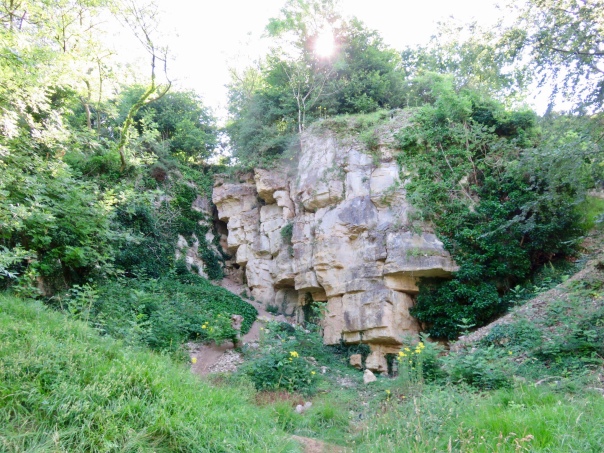 We visited the old Iron Age fort and Neolithic settlement at Crickley Hill. It looked like… a mound of dirt. Not a lot of artifacts in evidence from 6000 years ago! 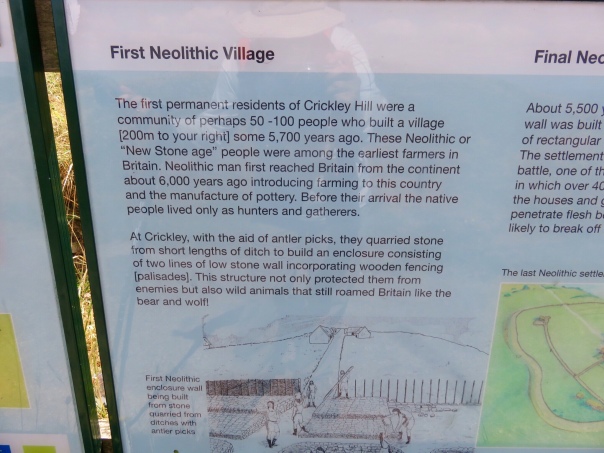 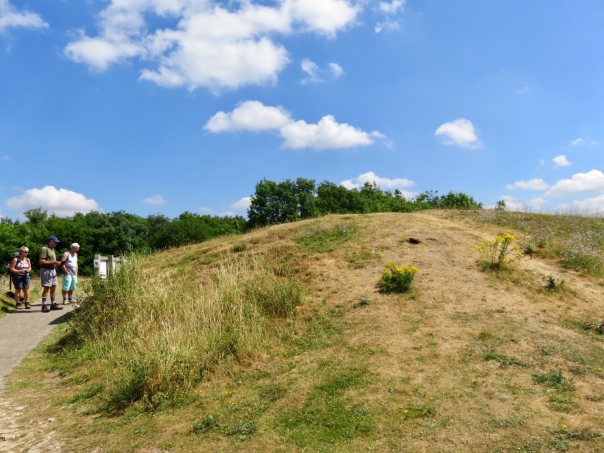 Our accommodation tonight was off the trail, so if there is anything to see in the village of Birdlip, we did not see it. Our host picked us up, and will drop us back on the trail in the morning.

July 13 – Now I know why old people used to get dowager’s hump – it’s from trying not to hit their heads on ceilings of old buildings intended for people only four feet tall! We had our full English and walked out of Stanton, straightening up as best we could. Only eight miles planned for today, with a tourist stop in the middle.

The first field we walked through had a series of plowman’s humps – perhaps to allow better drainage of water? Not sure, but they were fun to walk across.

Soon we came to the little village of Stanway, where there was a big manor house next to a little church. The church was nothing much inside, but outside it sported some little faces dating from the 1100s. 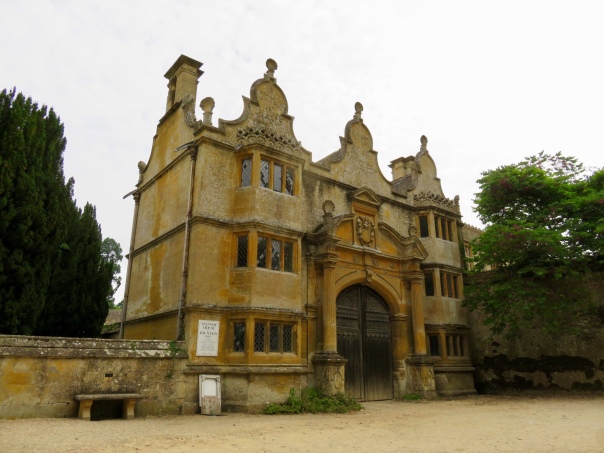 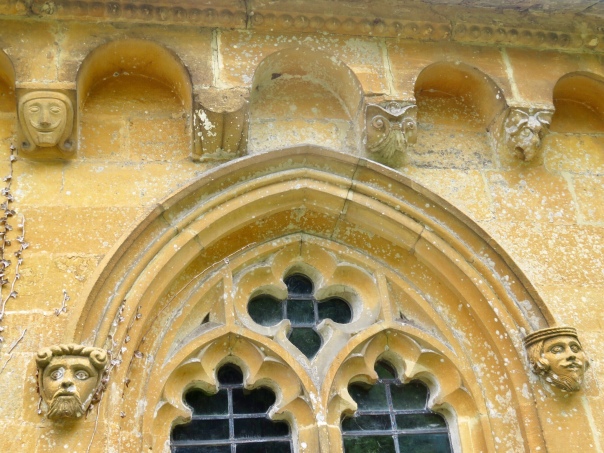 We climbed a big hill, then rested on a bench. Thanks, Pinky Dickens.

By lunchtime we reached Hailes Church, built in 1149, famous for the medieval paintings on its walls, dating from the 13th century.

A gryphon and a basilisk, amid heraldic designs, and some elephant-like creature with wings. 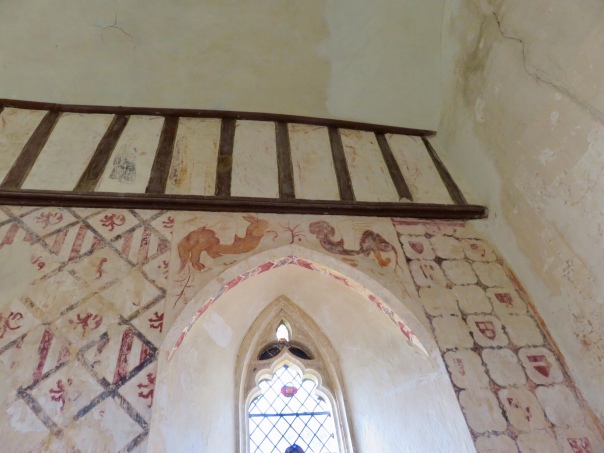 St. Christopher with baby Jesus on his shoulder. His is the largest image. 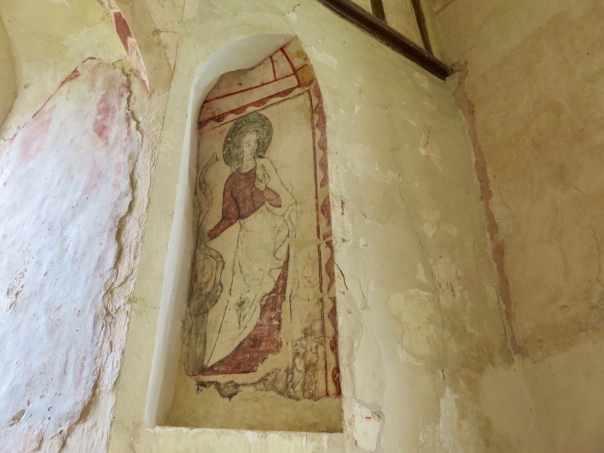 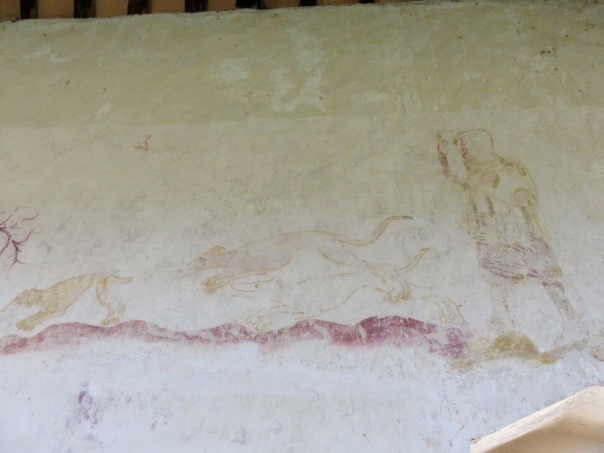 Stained glass taken from the ruined Hailes Abbey. We saw another piece of this yesterday in another church. 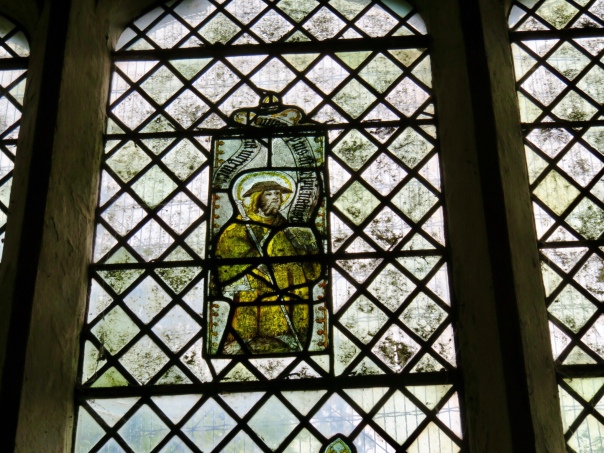 We then walked across the street to see the ruins of Hailes Abbey, built in 1246, and run by Cistercian monks. When King Henry VIII decommissioned the monasteries, taking all the gold and smashing all the saint statues in 1539, the townspeople finished the job by plundering everything worth taking, including most of the bricks. The grass growing on top of the walls is called soft-capping, planted deliberately to prevent further damage by erosion. 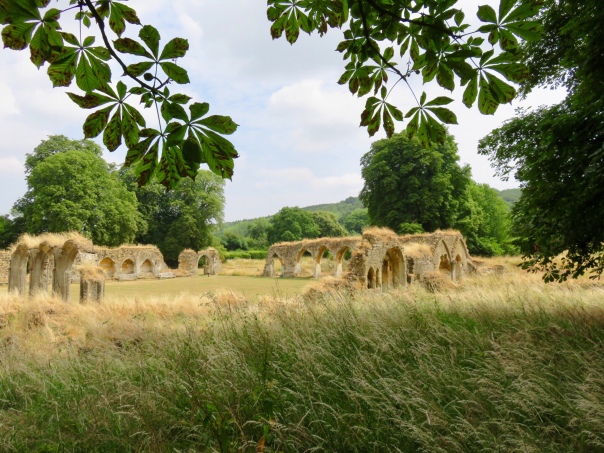 The Abbey’s claim to fame was a relic said to contain Christ’s blood, which brought pilgrims and their offerings from miles around.

We ate lunch at the Abbey, then got back on the road.

We walked through our first cornfield. These plants don’t look happy – they need some rain! 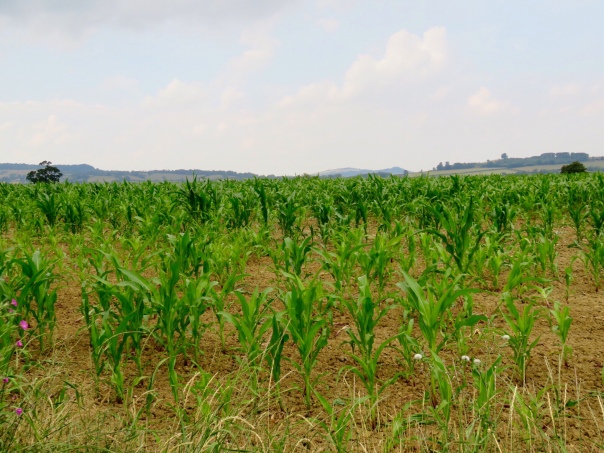 Before we knew it, we were in Winchcombe, another historic town. 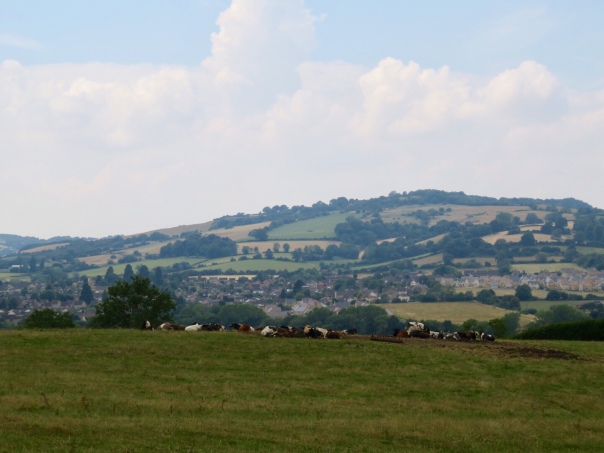 Tonight we are checked in to a 15th century room, with a bathroom door made for munchkins. Unfortunately, before we could get too comfy, we were told that a plumber was coming over to fix the leaky shower. (This bathroom had been upgraded to reflect the 20th century.) No problem, we went out and had dinner. When we returned, we found that the plumber was gone and the water to our room had been turned off – no sink, no toilet, nothing. The manager apologized and offered us a bottle of wine, saying they had no other rooms available. What?!!!

I’m sorry to say that I went full New York on the poor manager. Within 10 minutes, she checked other hotels for availability (no dice), then called the owner who personally drove in to ferry us to The Lodge – a £275. a night upscale place outside of town that has never seen a backpacker. I’m writing this from my Sleep Number bed with full head raising and reclining features, sipping my sparkling water while my socks dry on the electric towel warmer. Who says Friday the 13th is bad luck?