2/28 – We met with our new Chinese friends in the hotel lobby at 10am. I wish I could tell you their names, but after we were introduced, the names just leaked right out of my brain. We piled into a van, and headed to the Mogao Grottoes, an ancient collection of over 2000 Buddhist statues and murals as old as the 3rd century, hidden until the early 1900s in caves dug out of the mountains.

As usual, the Brits got there first, and carted most of the best stuff back to London. Visitors must take a guided tour, and ours was only in Chinese, so I can’t tell you much. Photos were not permitted, but after watching the other visitors snapping away with their phones, we did the same.

The grottoes are kept dark so that light does not degrade the relics. In most of the caves the guide’s flashlight was the only illumination.

There were many Buddhas and Bodhisattvas depicted, in the different styles of the ethnicities who traveled through Dunhuang on the ancient Silk Road. My favorite was a great big Buddha. Here is his enormous foot:

And way up there is his head: 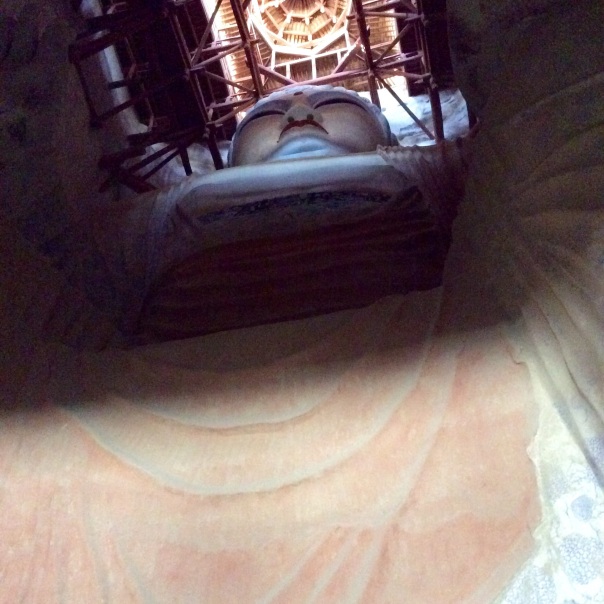 A young student heard us speaking English, and asked if we would pose with his family.

Outside the caves were stupas, tombs of famous monks and other stuff. 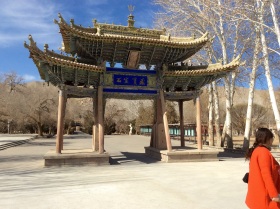 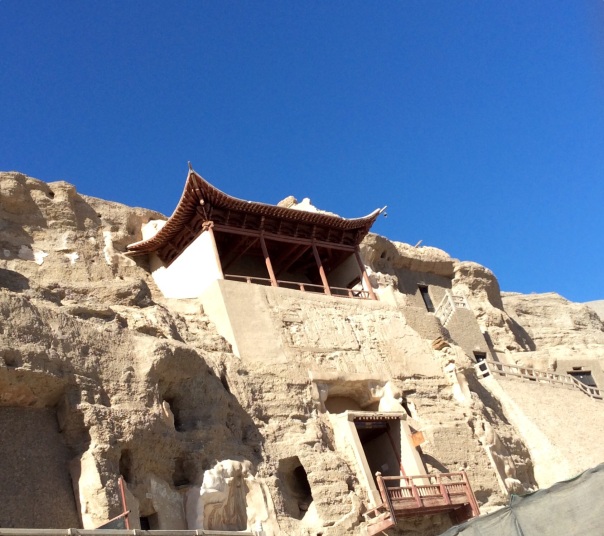 One of the tombs contained a statue with its head removed, probably during the Cultural Revolution. The fact that these grottoes were not destroyed during that period is a testament to their importance. 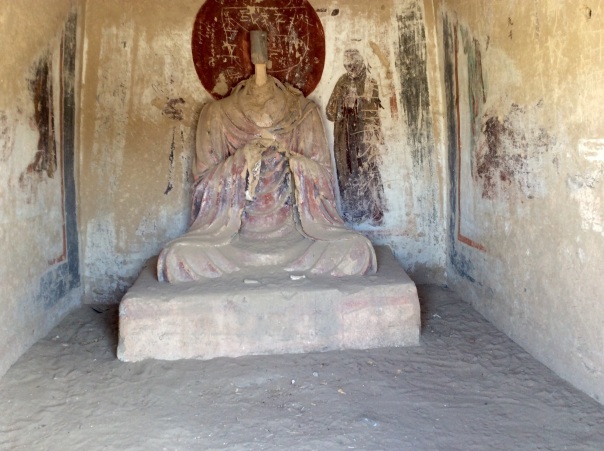 Here are our new friends.

We had lunch together at a small restaurant run by a Uyghur couple.

I made the mistake of ordering a chicken dish. The nice man went back into the kitchen and hacked up some chicken with a hatchet, and served it with pieces of bone in every bite. No horse, no chicken – I’m becoming a picky eater! The specialty in this town is donkey – do you think I will try it?

After lunch we went to the museum and saw more stuff.

Our last stop of the day was the big sand dunes of the Gobi Desert where they have camel races every year. 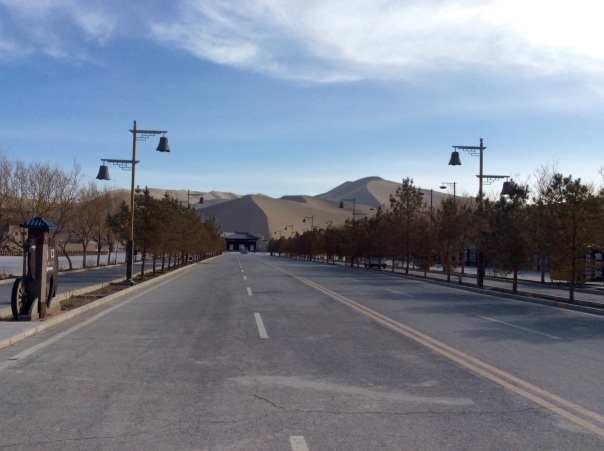 This is a poster of the camel races. 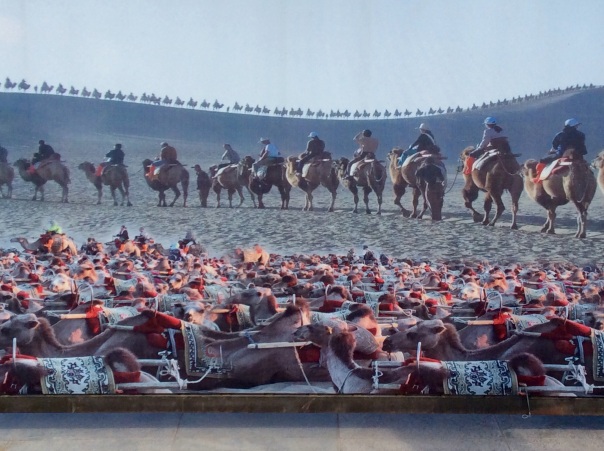 We opted not to take a camel ride, but as we turned for home, one came right down the street! 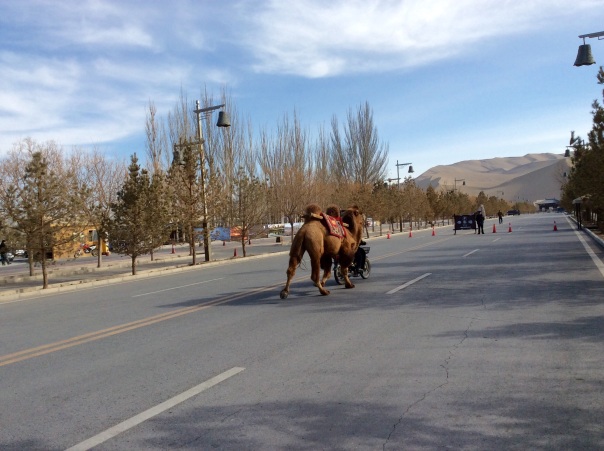 2/27 – Back to the Urumqi train station we go! Our train to LiuYuan departs at 9:27am so we left the hotel before 8 to make sure we got a taxi and got through the security check points at the station. Once again, we were asked to step aside for a thorough search after our packs went through the scanner. Profiling! Again, they were interested in our canteens, but rather than confiscating the water bottles like in the US, they just make you take a drink. If you don’t die immediately, they let you pass.

We found car 14, which was an open sleeper with 6 berths per compartment, but the compartments had no doors. We were the only ones in our section,N which was good, because I didn’t know how I would climb into an upper berth with my arm in a sling.

Lots of brown desert, and brown mountains. All day. Once we far enough from the city, the sky actually turned blue!

The conductor stopped by with his camera and a friend who wanted his picture taken with us. The novelty of being a westerner! We were happy to oblige. The nice conductor let us know when we were approaching our stop, and we were ready to get off by 6pm. LiuYuan is a one road town that depends on the train station for its livelihood. It has no hotels, so even though it was late in the day, we had to press on to Dunhuang. As we had read, there were taxis and a minibus waiting outside the train station. We jumped onto the minibus for the 128km /80 mile ride to Dunhuang.

Sharing the ride with us were three young Chinese women on holiday. One had a bit of English, and asked if we were going to see the sights of Dunhuang tomorrow. When we replied yes, she suggested that we go together and share the taxi fare. Deal!

Here’s a funny thing. The minibus had to stop for gas. As soon as the bus stopped, everybody got off, and walked briskly to the edge of the road, as far from the natural gas pumps as possible. There we stood, shivering in sub-zero temperatures, as the attendant filled the tank. Do buses explode often here?

The road to Dunhuang is an absolutely straight two lanes, rutted and potholed, through absolutely flat, featureless desert. The most interesting thing was watching for the kilometer markers as we bounced along (my arm aching with every bounce). After the sun set, the ride became more interesting, as our driver expertly maneuvered around bicycles, pedestrians, and three wheeled carts with no lights at all. By 8:30pm we were in Dunhuang, a brightly lit, friendly looking town. The bus driver took us right to our hotel, and the three young women decided to stay at the same hotel too.

Dunhuang was an important stop on the ancient Silk Road. Tomorrow, the sights!

2/23 – We hung around our hotel today, listening to the construction above our heads as they rebuild the hotel after a fire. The goal was to give my arm a day of rest before subjecting it to another bumpy train ride. My throat is full of construction dust and my eyes are scratchy. I’ve had enough of Kazakhstan, thank you!

We used the one finger method to catch a ride to the railway station. Best system ever!

2/24 – Midnight train to Urumqi, China. This little cutie was very interested in my iPad. 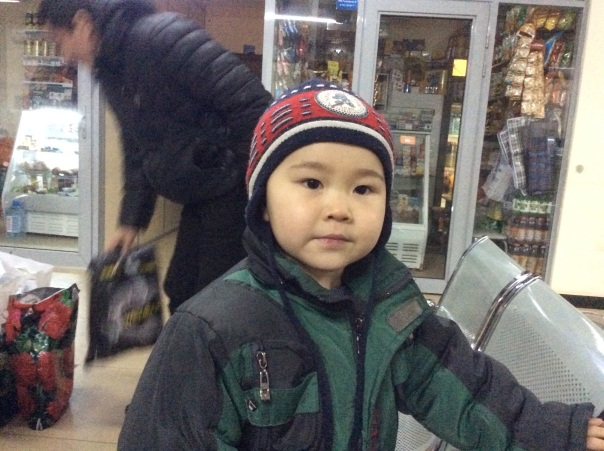 Had to cross over three sets of tracks and vault up onto the train. The conductor tried to help me up by grabbing my arm – ouch! Re-injured my shoulder. We have a four berth compartment to ourselves. 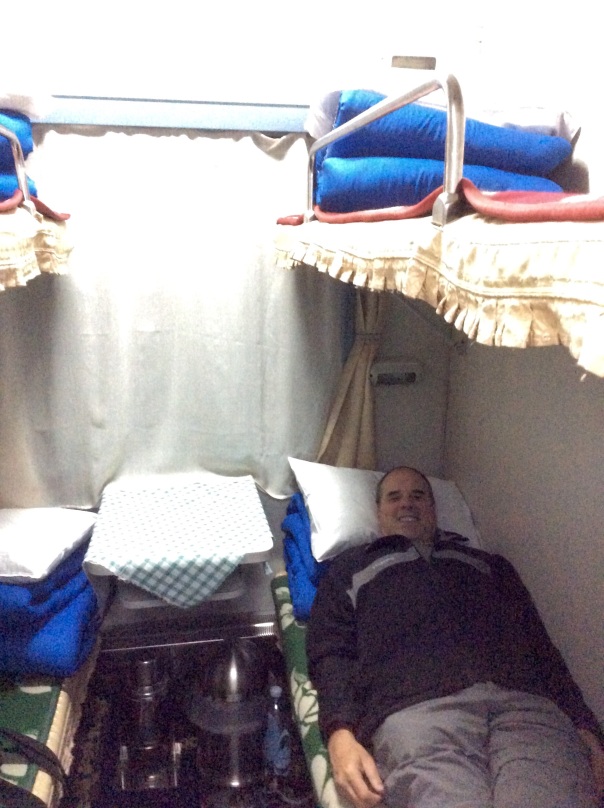 In the morning, lots of cold desert. Discovered there was no dining car, as we had been led to believe by the Man in Seat 61. Hope we have enough snacks! 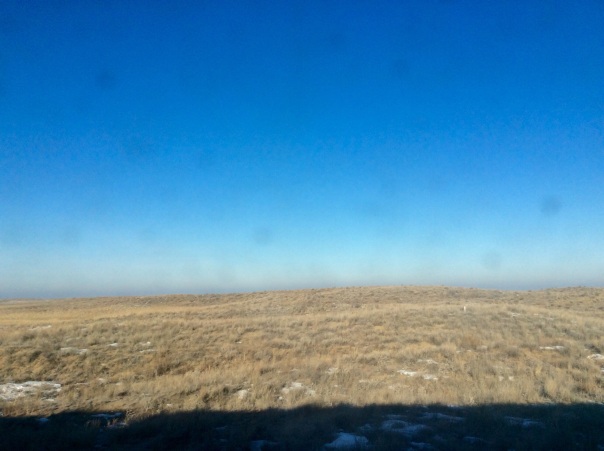 The path we are following is part of the ancient Silk Road trade route through the east. 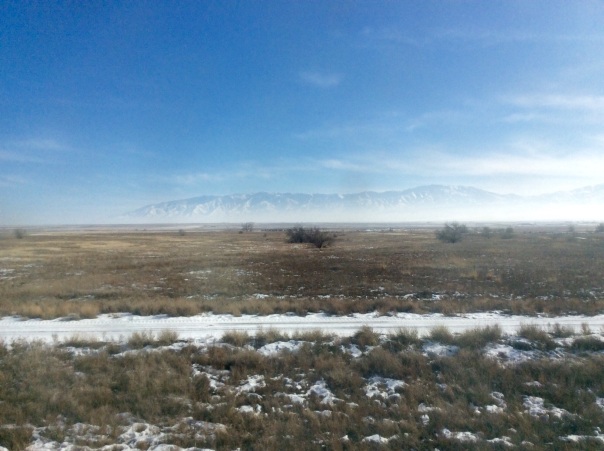 At 5pm our conductor indicated that we would be stopping for one hour, and could get something to eat in the station. We understand that this break is to enable them to change the wheels on the train, as the track gauge is different in China (Lionel vs. H.O.?). 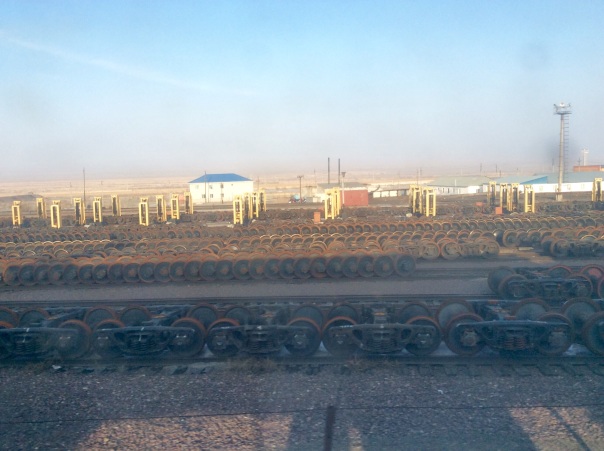 The menu was only in Russian, so we walked around the cafe, saw a tasty Asian stir-fry with rice at another table, and pointed to it. That’s how we get fed!

By 7pm our room had been inspected by Kazakh customs. This was the first time our bags had been searched – we had to dump out the contents of our backpacks for inspection.

By 9pm we repeated the process for Chinese customs. Bags searched again. They turned on my phone and were interested in the picture I had saved of the Istanbul metro – I wonder what they were looking for? The train started moving again at 11:30pm, and we adjusted our watches for China time, so it is 1:30am. Welcome to China! Not sure if we’ll be able to blog reliably from here due to censorship, or the Great Firewall of China, so please be patient. We’ll do our best!