July 17 – Spent too long over breakfast at the B&B this morning, swapping tales with three Aussies about times things went wrong on the trail. The screwups make the best memories! Ten miles planned for today.

Unbelievably, the weather continues clear and sunny, although this morning was a bit cooler. 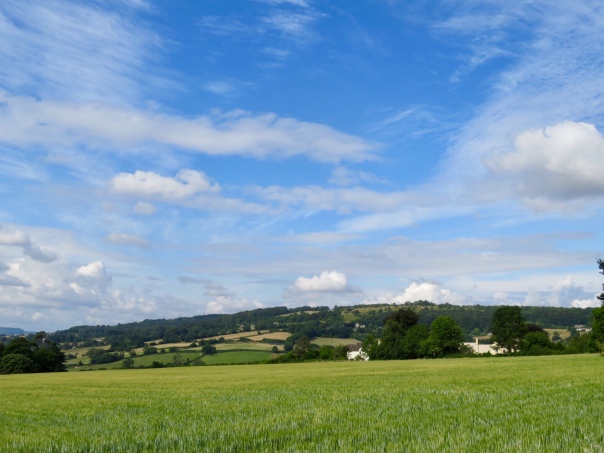 A sculpture in the middle of a field – a memorial to a local “rambler.” 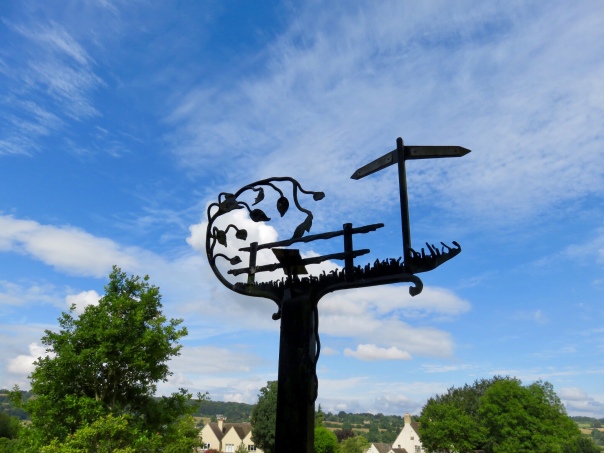 Through a green tunnel and into the woods.

We reached the marker for the halfway point of the Cotswold Way, although it is not technically in the middle. 47 miles down, 55 more to Bath!

We came to a stone commemorating Oliver Cromwell’s successful battle in the civil war in 1643. Seems odd to fight a battle in the woods, but I guess there was a lot more woods back then!

We climbed the Haresfield Beacon, giving us 360 degree views of the countryside. Nice clouds. 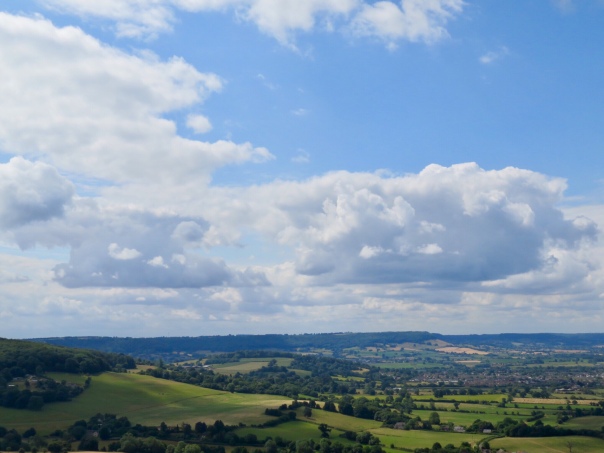 As we walked down, we could see an image in the barn loft. What was that? 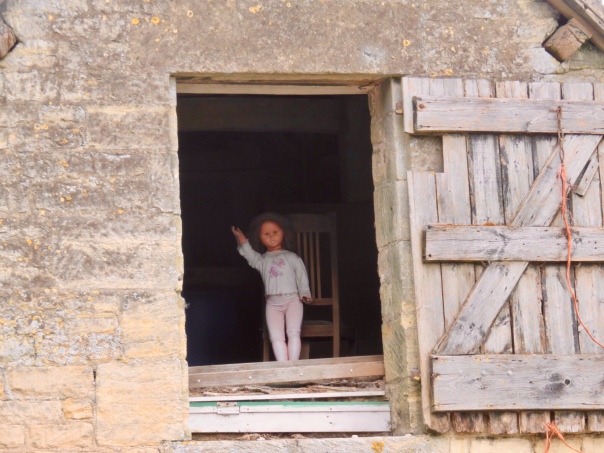 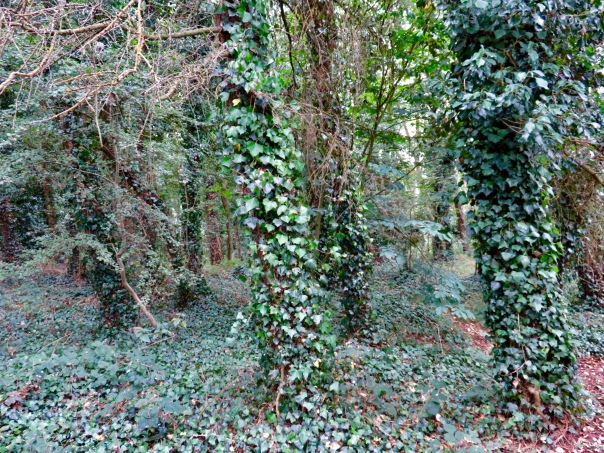 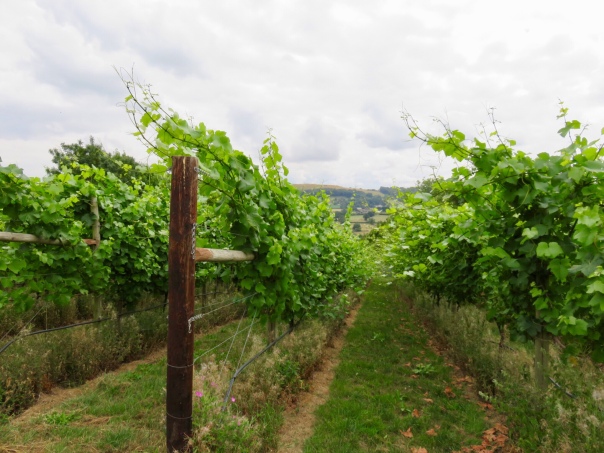 Over the railroad trestle, and before too long, we were in King’s Stanley.

Tonight we are staying at Grey Cottage. More about this tomorrow!

July 16 – Another continental breakfast this morning – I’m beginning to crave my full English! Eight and a half miles of shady woodland walking planned for today.

In an hour we reached Cooper’s Hill, home of the infamous annual cheese rolling competition. We saw this notice at the foot of the hill:

It’s hard to capture the steepness of a hill in a photo, but trust me, we are way high up and the hill is very steep. You can tell how hard we worked to climb the hill by the sweat that accumulated under Jim’s backpack, reminiscent of the silhouette of a Playboy bunny.

Every May holiday weekend, hundreds of people from all over the world congregate on Cooper’s Hill. A nine pound wheel of local cheese in a wooden container is rolled from the hilltop, and everyone scrambles down after it. The person who captures the cheese, wins! Ambulances wait at the foot of the hill to carry the many injured off to hospital. There were so many injuries that the local government demanded the contest cease several years ago, and refused any responsibility, but the annual contest goes on! Sort of like the running of the bulls in Pamplona, only with cheese.

Flowers blooming in the shade.

In Japan, this would be called a kami tree, with spaces for the spirits to live. Here it’s just an interesting tree.

After a while, we found ourselves on another golf course, also home to a Neolithic fort. You can’t fool me twice – it was just dirt. 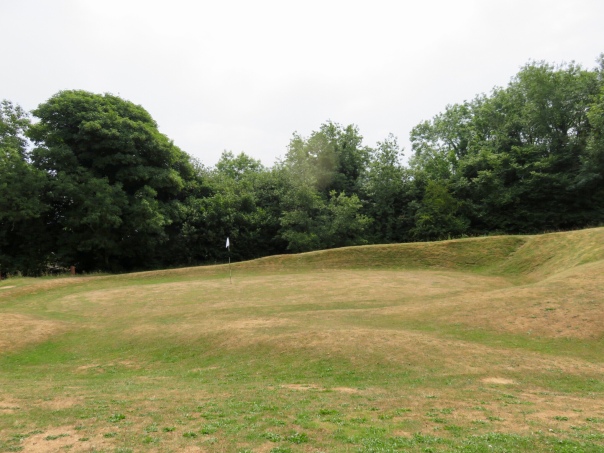 Back into the woods. A pretty butterfly. 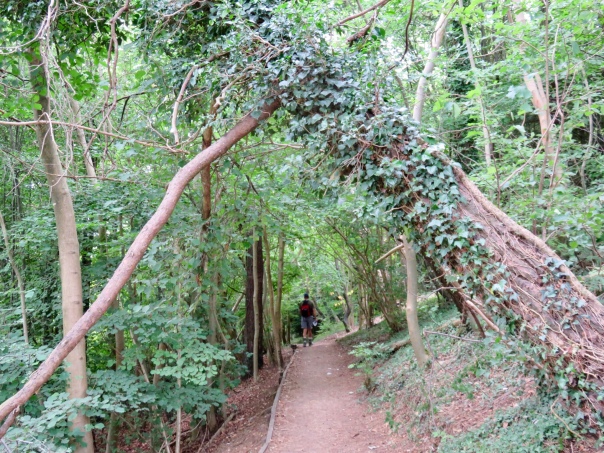 Then into Painswick, another Gloucestershire village that became prosperous in the wool trade.

Walking into town, we came upon the Painswick Rococo Garden; a re-creation of a garden that occupied this very site in the 1740s. Built on six acres, the garden was a place to invite guests to schmooze and canoodle, with little cottages and secluded arbors. 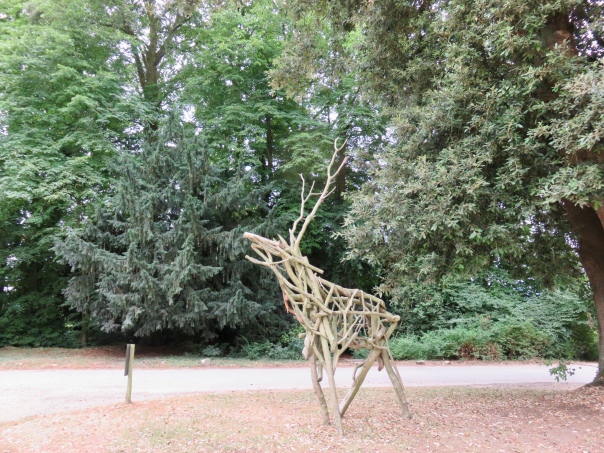 There was also an extensive kitchen garden for fruits, vegetables and herbs. 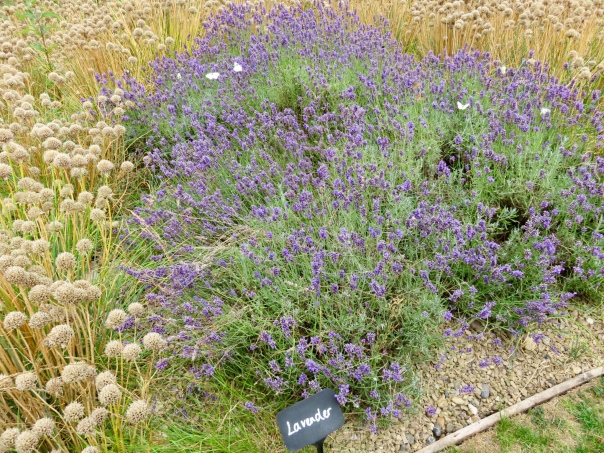 The garden was abandoned and became overgrown, but is now being restored, using a painting of the original garden, and only plants that were available in England in the 1740s.

They recently added a maze to celebrate the 250th anniversary of the garden. We slogged around it for a while, but never found the center.

In town we found a stunning St. Mary’s Church. I’m still surprised that the C of E church is the fanciest one in town, and that all the churches are open to visit. 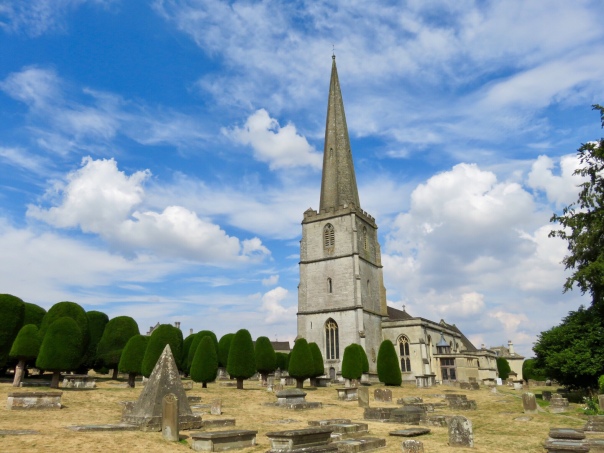 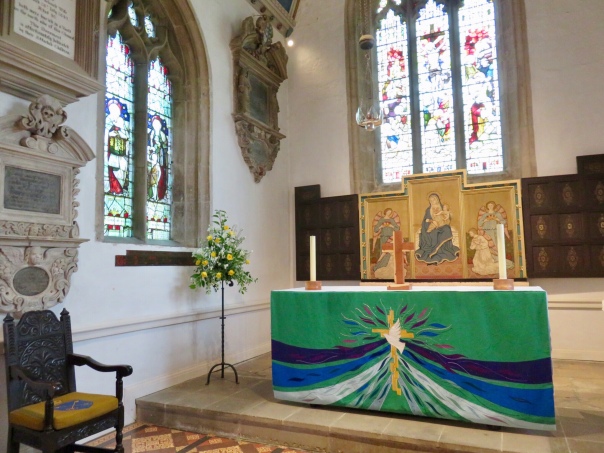 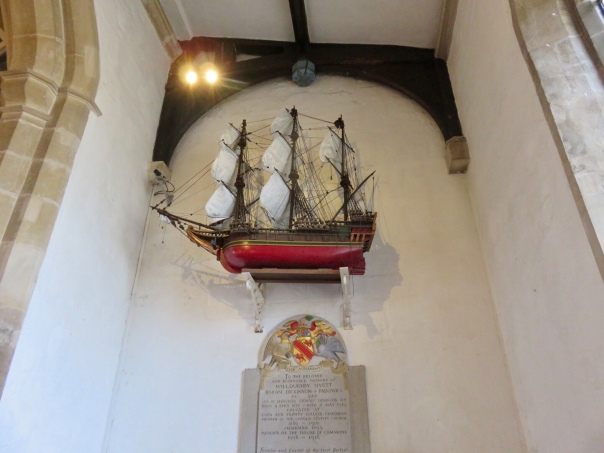 Also, the public stocks that were used to punish miscreants in the 1800s.

A pub supper, and we were off to bed. A lovely day. 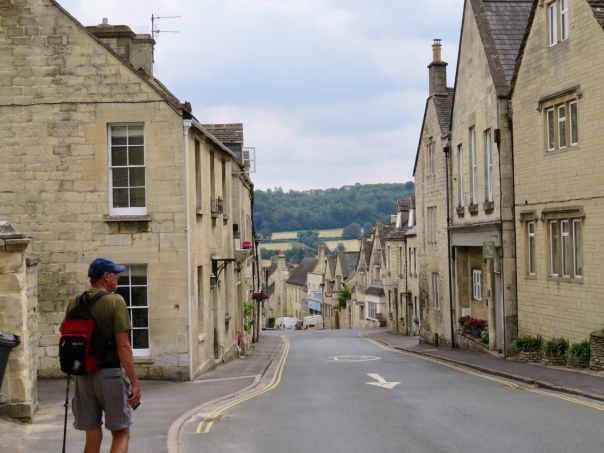