3/26 – It’s still cool and overcast, with a drizzle of rain, so we decided that today would be a good day to visit the palace; home to the Kings of Laos until the last was overthrown by the Communists in 1975.  Like other places, we are required to remove our shoes before entering, and store our cameras and phones in a locker.

Outside there are gardens and a pond filled with hungry fish that rise to meet anyone that approaches. 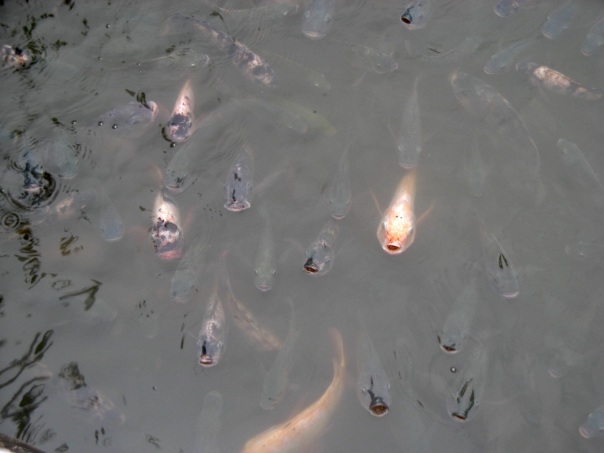 We see the gold-covered conveyances that once carried the king on ceremonial occasions. 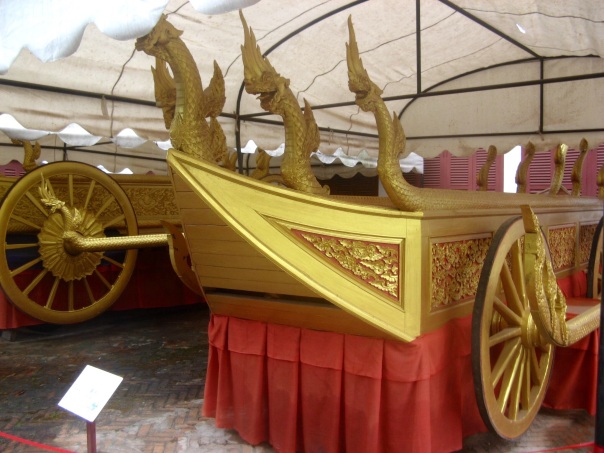 There was a large garage filled with Mercedes Benz and other cars given to 20th century kings as gifts, including a white Ford Edsel in mint condition.  Sorry, no pix allowed there either.  Inside the palace, we see bedrooms, dining rooms, and a very impressive golden throne room, with walls covered with mirror mosaics of tiny Laotian people.  Photo courtesy of Trip Advisor.

Several rooms are dedicated to gifts given to the king by foreign governments- France, Britain, China, Japan…  I’m starting to feel embarrassed to be an American – no gift from us?  Then I spot it – two pens on a stand given by Richard Nixon, and a moon rock.  Thank goodness!  I can hold my head high once again.
Walking back from the palace, we see the Luang Prabang Library, where tourists are encouraged to donate to buy a book for one of the two Library Boats that cruise the river to bring literacy to village children.

At lunchtime we investigate the street stands, and Jim finds a lady grilling chicken and fish.  It smells so good, he just has to have one! 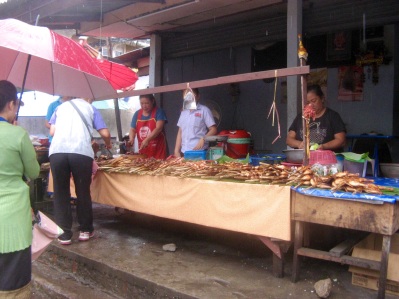 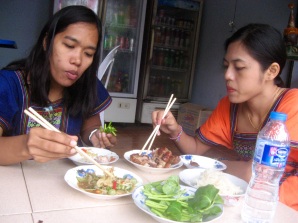 One more wat, and we’re done for the day – we plan to get up very early tomorrow morning!

9/15 – Coimbra is a university town, and the tourist attractions are all on the university grounds, way up at the top of the hill. Students in Coimbra don’t have to worry about the Freshman 15 if they walk up and down these hills every day! 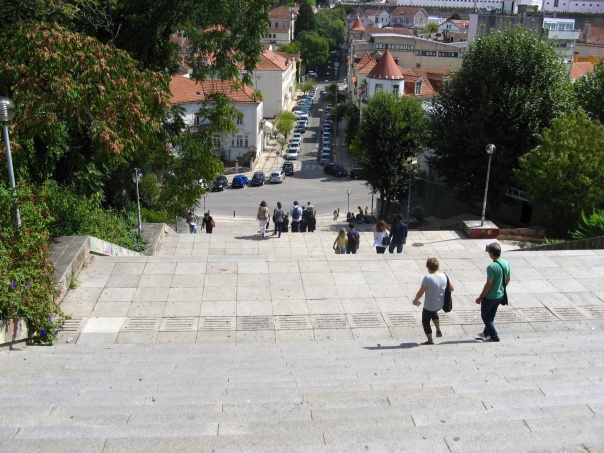 Our day to see the city happened to be the first day of the fall semester, and the campus teemed with students from the different college majors congregating in the square and trying to outshout and outsing one another. As best we could tell, the poor freshman were being indoctrinated into their respective houses by having to wear bibs or signs around their necks proclaiming their unworthiness, being made to run around the square shouting “I am an Idiot”, and other fun things that will remind you of pledge week at the frat house. 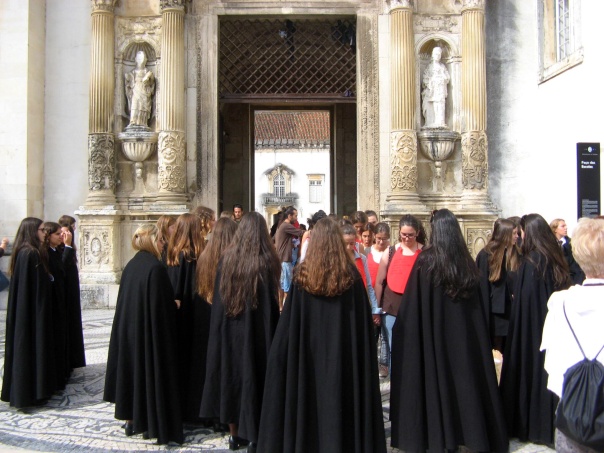 The upperclassmen and women all wore long black gowns a la Hogwarts, and we were told that this is the daily dress expectation, not just because it was the first day of class.

We got to peek in the St. Michaels Chapel with its grand pipe organ: 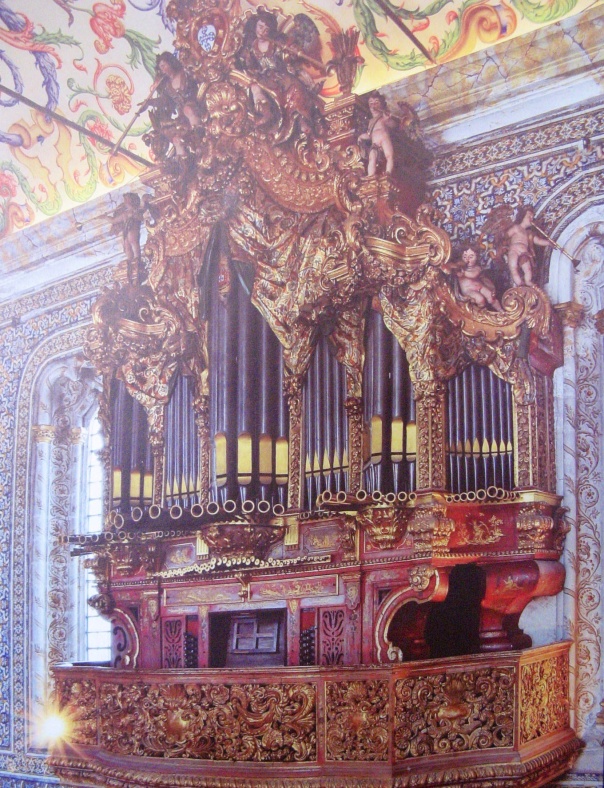 … and the historic campus library, where there were books over 600 years old. The library is home to a family of bats, who fly around every night and eat the bugs, so that the bugs don’t eat the books. The furniture is covered every evening against the guano, and the place cleaned every morning… 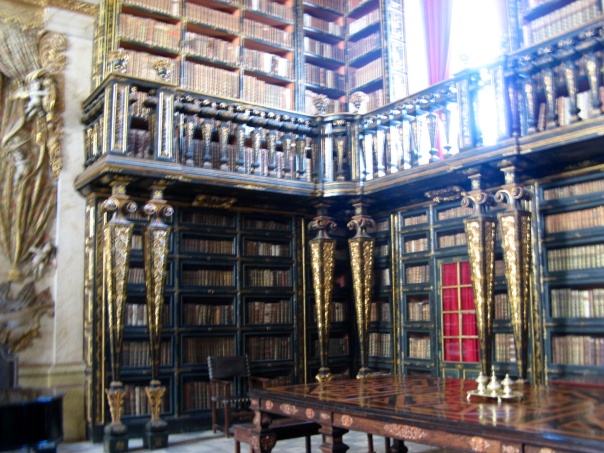 We also got to peek into the Academic Dungeon, which wasn’t built with tall people in mind. We wondered what crime one had to commit to be remanded there!

I liked the fancy ceilings: 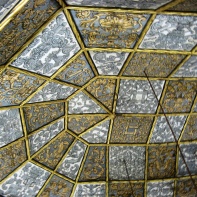 We ambled around the city, and stopped for lunch at a place that advertised Cheeseburguers. Now that’s something we haven’t had in a while! We ordered two, and should not have been surprised when they were served, no bun, with a slice of ham and a fried egg on top. We asked for ketchup, and were given a tiny packet with not enough ketchup for three French fries. We are citizens of the world and loved these cheeseburgers! Viva Portugal! 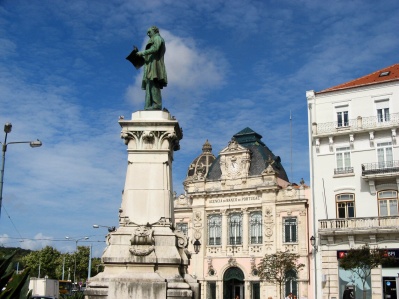 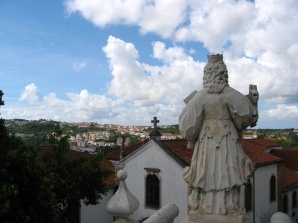 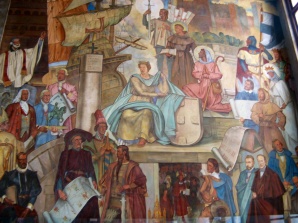 Lexi and Emma, here are some pics for you! Love you! 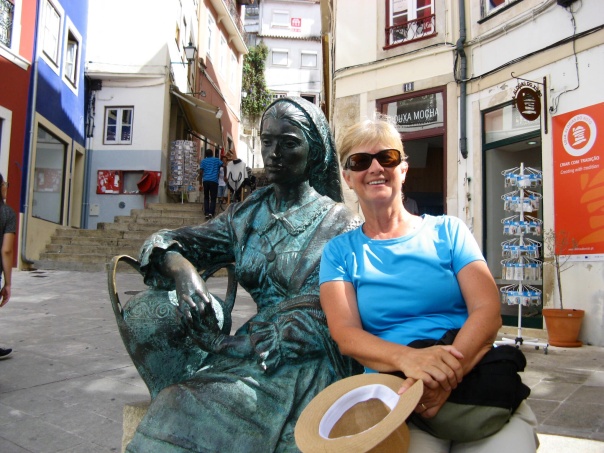 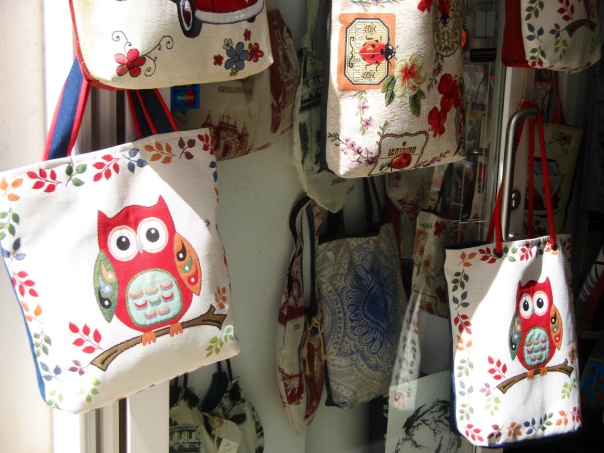