Mar 6 – We’ve enjoyed our week’s respite in beautiful Flores, walking the town and the hills behind us on the peninsula, which we found was called San Miguel.

Jim discovered a network of trails that promised a scenic overlook from El Mirador.

In addition to the view, we found a big rock. Little did we know, this was an artifact of Tayasal, another ancient Mayan site with its own grand plaza and pyramid, that was rediscovered in the 1920s and studied by archeologists from the University of Pennsylvania in the 1970s. Right up the hill from our hotel! We were the only ones there.

The carving on the rock below depicts a human figure sitting cross legged on a mask with a bar in his left hand. Can you see it? Me neither…

Next door to our hotel lives a parrot, who perches on the veranda and wolf whistles at all the passers by. 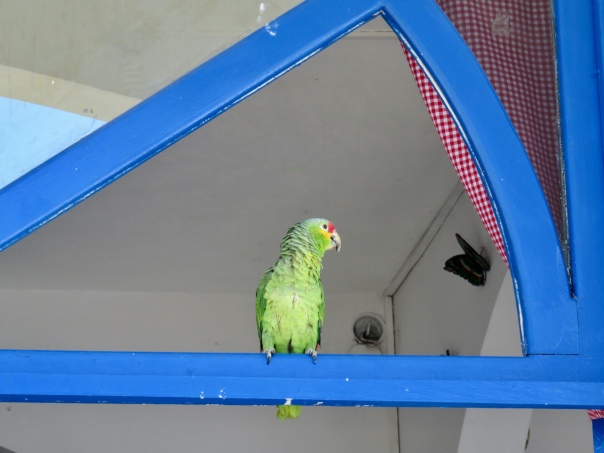 We heard a marching band right under our hotel window, and rushed out to see a parade in honor of the local Quinceañeras (coming of age party for 15 year old girls) 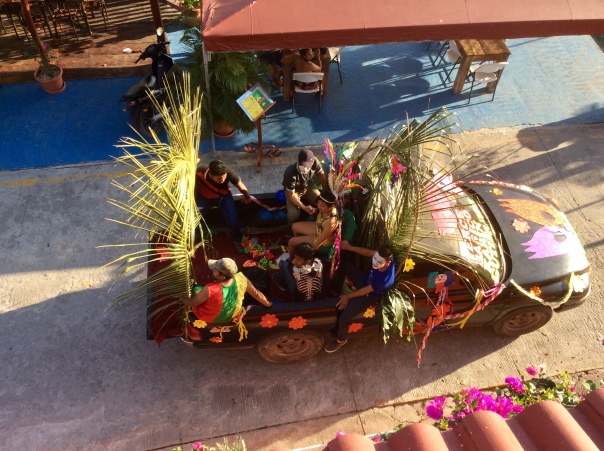 We’ve become enamored of a little panderia in town with an enthusiastic baker who let us sample her wares before selecting. On our last day in Flores, we asked if we could take her photo. You can see her shoulder as she quickly ran to hide behind the door! 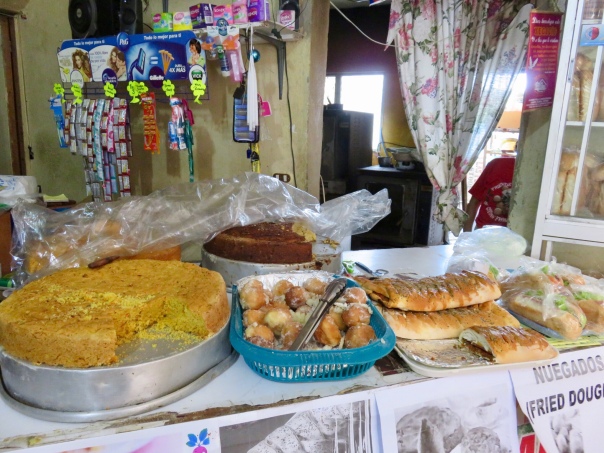 Mar 7 – Remember how many hours we spent on buses to get us from the south to the north of Guatemala? Our return trip to Guatemala City took exactly one hour, thanks to the regional airport in Flores. Yay!

In typical American style, we got to the airport two hours before our flight was scheduled. In typical Guatemalan relaxed fashion, we sat in the terminal looking at our empty plane until the pilot arrived, about ten minutes after we were supposed to take off. Then the young woman who administered our boarding passes shrugged into an orange vest and walked us out to the plane. Remember planes like these?

When we were all inside, she checked that everyone had a seat belt, then she left. The pilot got up and locked the hatch. When was the last time you got to watch the pilot fly the plane?

It was my job to make sure the left propeller kept turning.

In an hour we were back in Guatemala City, and ten minutes later at our hostal, a beautiful home with a lovely garden in the heart of the city. There are no restaurants nearby, so our host showed us a little shop around the corner where the proprietor cooks a delicious meal for those who had reserved. We had a lovely supper with a couple from Minnesota, a man from Hamburg, and a woman from France. A great ending to our adventure.

We were up at 6 and at the airport at 7 for our flight to Atlanta, where Customs was so slow that we ended up sprinting through terminal B to make our connection with three minutes to spare. Happy to say we made it, and we are back home safe and sound. Til next time!

Jan 28, 2019 – It’s been a little too cold in Virginia lately, so we’ve been planning to warm our old bones with a little Central American sunshine. Thanks to the government shutdown ending just in time, we hopped a very pleasant flight to Atlanta and then one to Guatemala City with nary a hitch. Neither flight was filled, and we actually got to spread out a bit and felt like humans instead of packages in transit to a hub!

So, where is Guatemala? No, friends, we are not in, or anywhere near Venezuela where the current politics are a bit dicey, nor are we in Brazil where the dam just burst. There are no caravans forming here headed for US borders. Heaven knows we are not in Guam, despite the spelling similarity, nor in Guadalupe (see Mexico 2018)!

Guatemala (pronounced like What-emala) is just south of Mexico, with volcanos to climb and jungle ruins to explore. We only jumped one time zone, so no jet lag. We are currently at about 5000 feet elevation, similar to Denver. We are in the dry season, and the weather is temperate, with daily highs expected in the mid 70s.

The money here is the Quetzal, which is also the national bird. As a bird, it is long-tailed and resplendent. As money, it takes between 7 and 8 of them to equal a dollar. Now you know everything I learned about Guatemala online.

We found an ATM deep in the darkened airport with the assistance of a friendly taxi driver (who didn’t even ask for a tip), then called our B&B for a pickup. Ten minutes later, we walked in to Hostal Guatefriends, a very nice place indeed, with a private toilet and hot water shower. We don’t expect this level of luxury everywhere in this country.

Jan 29 – After a nice hot breakfast (eggs, black beans and good strong coffee ) we set out to see what there is to see in Guatemala City. There’s not much, and most guidebooks suggest not to bother, but we are here, so we will see. Our hostal is about 4 miles from the city center – too far to walk, and taxis depend on haggling, so we decided to Uber. Oswaldo picked us up in two minutes flat. Uber (pronounced Oovair) rocks!

Our first destination was the Palacio Nacional, which has a museum inside. 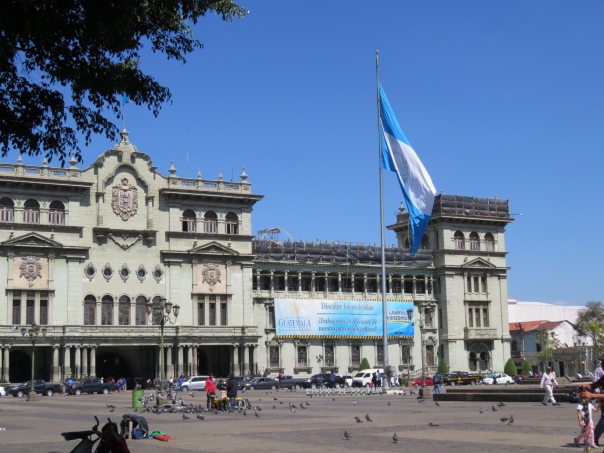 We tried to walk in, but were stopped at the door. Although Guatemalans may enter for free, foreigners must pay $6 US each, and stand outside until the next tour starts (on the hour). A guided tour for foreigners – how nice! Will the tour be in English or any other foreign language? No, solamente Español. Oh well. With 50 minutes until the next tour, we decided to move on.

Next door to the Palacio is the Catedral Metropolitana. The Cathedral sustained damage from several earthquakes, and has been rebuilt.

The Cathedral has small chapels dedicated to various saints, and paintings of the life of Christ all done by Pedro Ramirez in the 1600s. 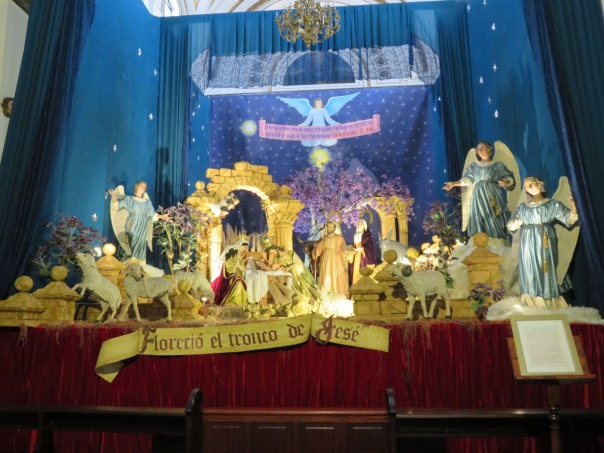 Then we walked over to the Mercado Central, where everything you can imagine is on offer. The market, formerly three stories tall, was also devastated by earthquake, and is now mostly underground. 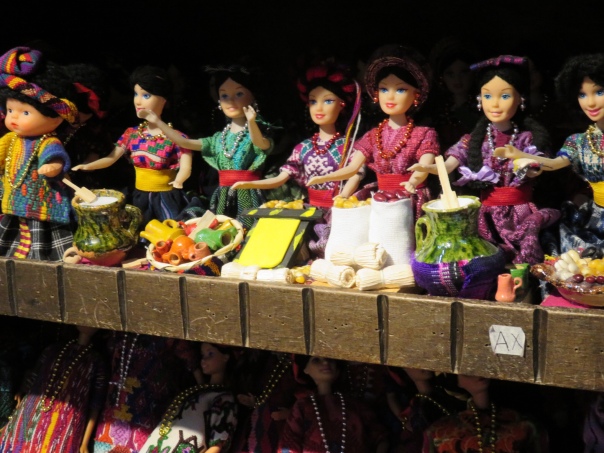 A big part of the market is selling fresh hot food, and we picked the busiest booth, on the theory that the best food was there. Don’t know what we ate, but it was delicious!

A great first day. Tomorrow, we’re off to Antigua!