Apr 15 – Today’s walk is only 9 miles, and the morning is cool and clear.  Leaving Almadén, we see the bullfighting ring. 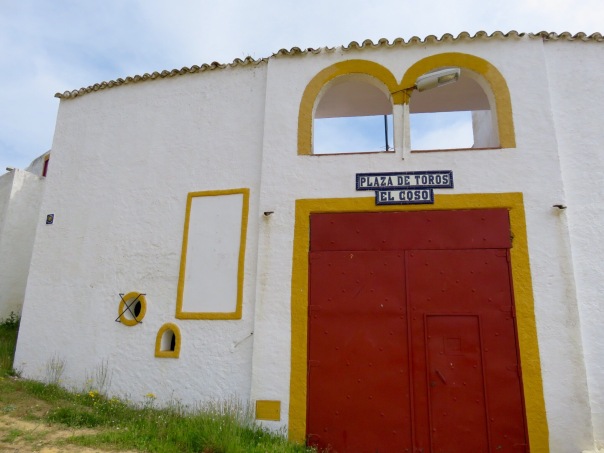 Today’s trail is brought to you by Parque Natural Sierra Norte. 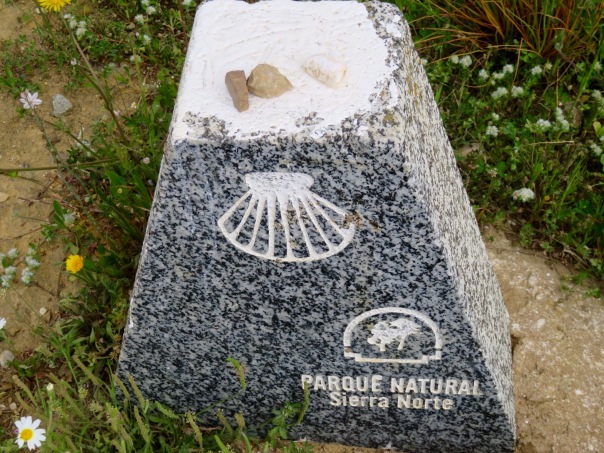 We are walking through farmers fields, opening and closing many gates as we go.  We walk through LOTS of free range pigs.  If you make noise, they will get out of your way. 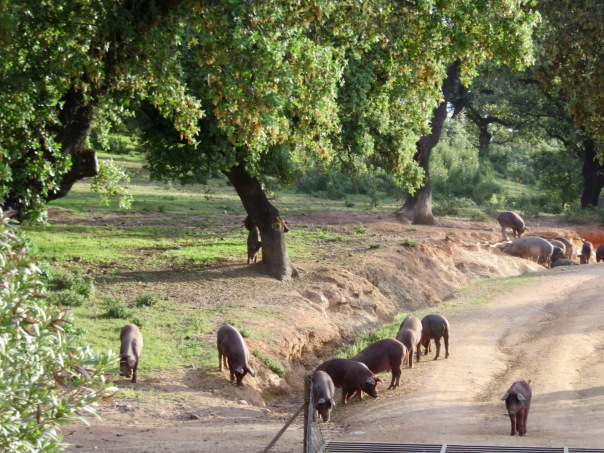 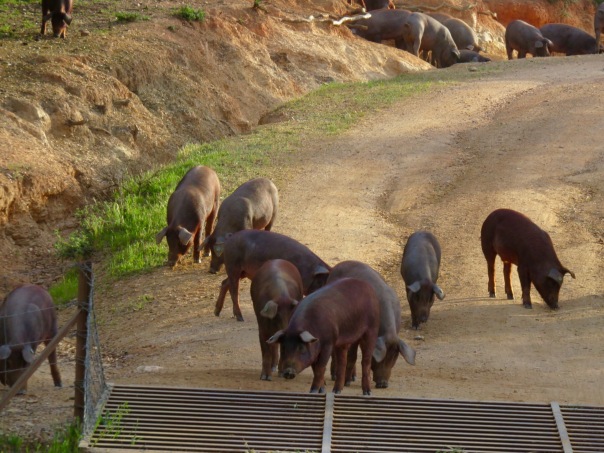 We also saw some spring lambs, and a lake. 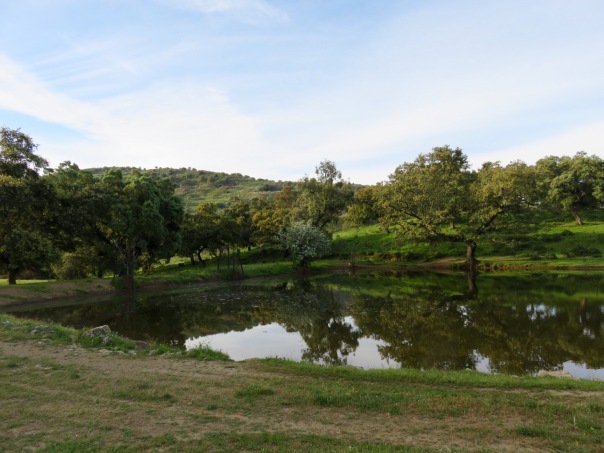 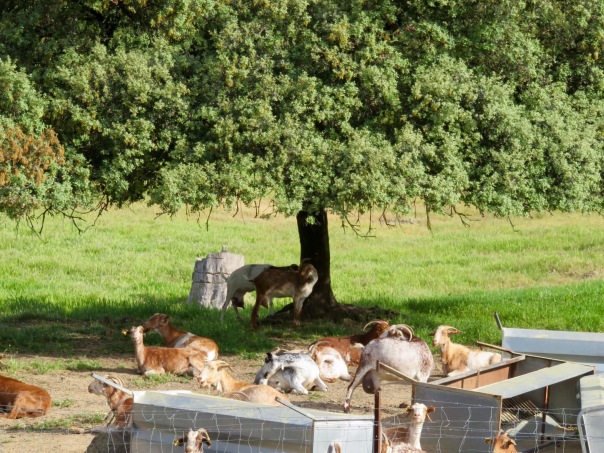 And a pretty big hill.  I had to shift down into first gear to get up the hill, taking little steps. The view from the top was lovely. 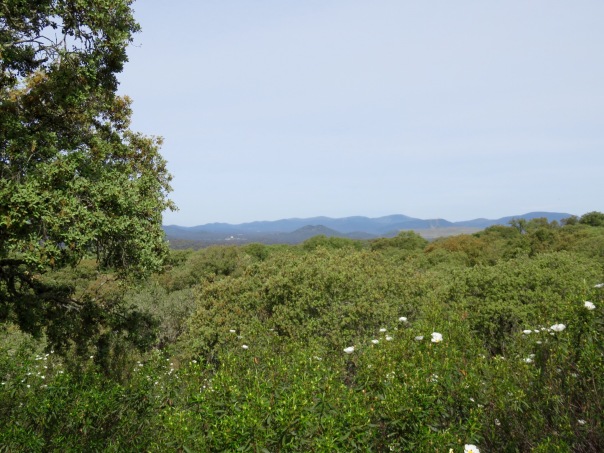 We passed an old castle that had seen better days.

We were passed by seven bicyclists, including one from the Netherlands who stopped to chat, and we passed two women from Argentina.  Then we saw El Real de la Jara, which might mean the Royal Rockrose, or might mean the Real Fuzz.  Google Translate makes me laugh.  We asked our waitress at dinner, and she said it meant the Reality of the Rockrose, and that the rock rose is a flower.  Jim asked if it was a pretty flower, and she replied, “not particularly.”  She showed us a photo, and I realized I had taken several of them, including the pic at the top of the hill today.  I think it’s a very pretty flower. 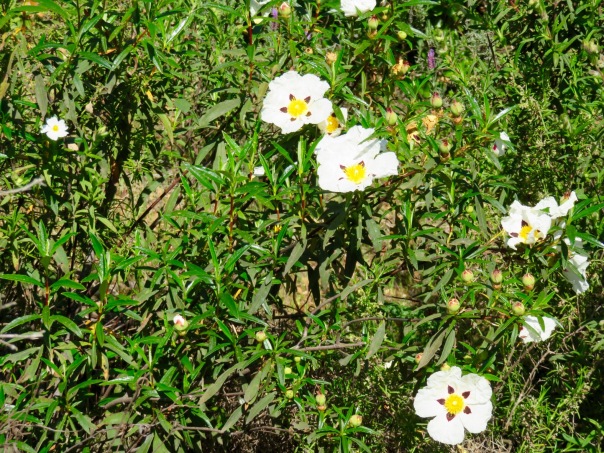 This town boasts a real castle on the hill, so after dropping our packs at our room, we went to check it out.

The castle is of unknown origin, probably built in the 14th century to keep out those pesky Portuguese.  From the ramparts, you can see another castle! The white road (old Roman road) is part of the trail we’ll be walking tomorrow. 569 miles to go.

12/21 – Another beautiful hiking day. Kas is on the Lycian Way, so we are continuing our day treks, wherever the trail takes us. Today we climbed up to a Doric tomb, 4th century BCE, freestanding and carved out of the bedrock, with a walkway all around. The sign said it was decorated with images of 24 dancing girls, but, try as we might, we could not see them. You can just make out some flowers carved inside.

There was room to sleep four – two slabs on each side. I tried to lie down for the full experience, but was a little too tall for the lower berth…

The trail wound down the hill to an ancient theatre, from the 2nd century BCE. It could seat 4000, and seated us while we ate our lunch. 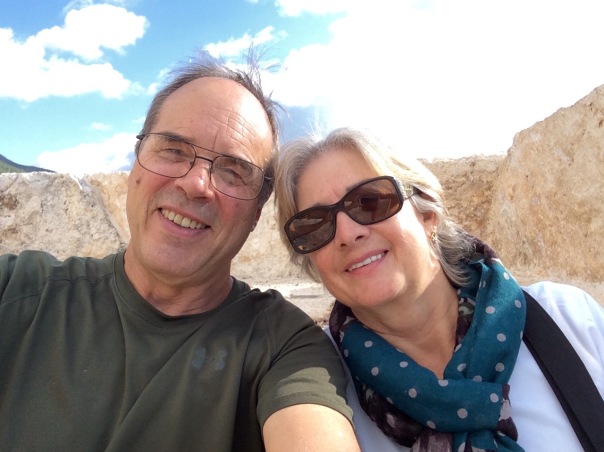 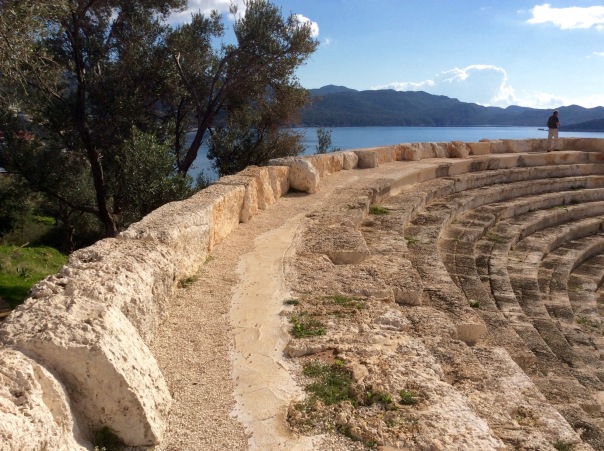 Imagine our surprise when we were joined by a family of goats! The billy and the nanny really seemed to enjoy gamboling up and down the tiers. 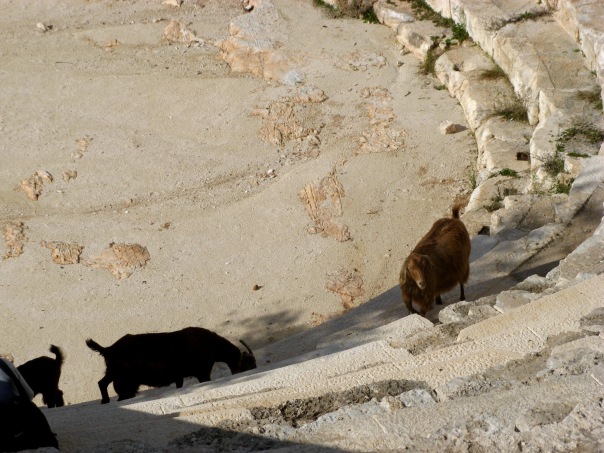 The baby goat and Jim, checking each other out. 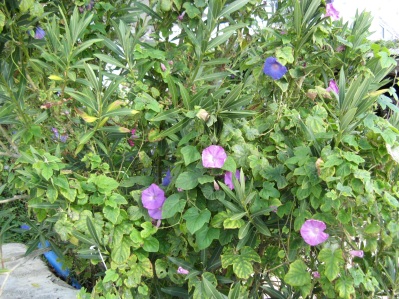 On our way home, we found a sarcophagus and the ruins of a Hellanistic Temple, right in town. 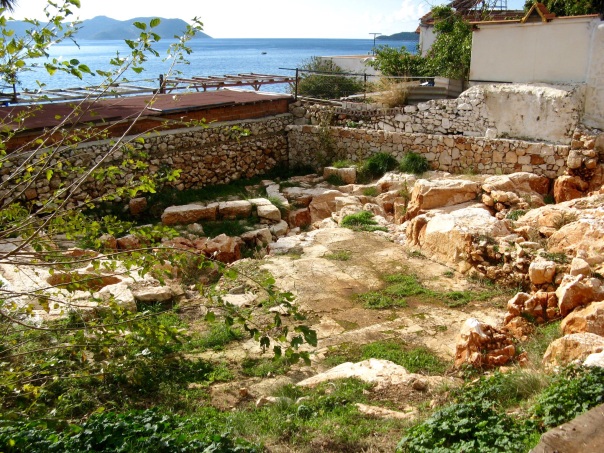 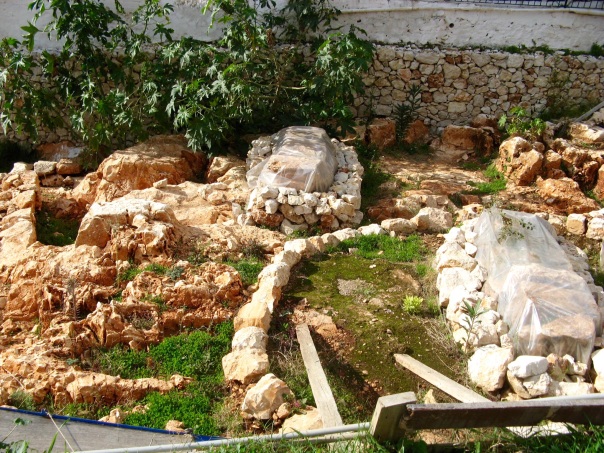 A man was feeding meat to the stray cats. He told us that he fed 100 a day. He asked for money to continue his good works, then was insulted when Jim only offered him two lira (about a dollar) and refused the money.