Apr 11 – This morning we left our little home in Triana, following the yellow arrows out of Sevilla, to start our 621 mile walk to Campostela de Santiago.  If we make it (operative word is IF), this will be our longest Camino so far.  Today’s segment is 13.7 miles.

The Camino starts at the door of the Catedral, and proceeds north for a really long time.

After this sign in the sidewalk, the trail is marked by yellow arrows, spray painted on utility poles and trees.

This Camino is less popular than the Camino Frances and the Camhiño Portugues, as it covers long stretches of featureless farmland, and is considered the most boring of the Caminos.  We shall see!

After leaving Sevilla, we found ourselves on a dirt road surrounded by wildflowers. 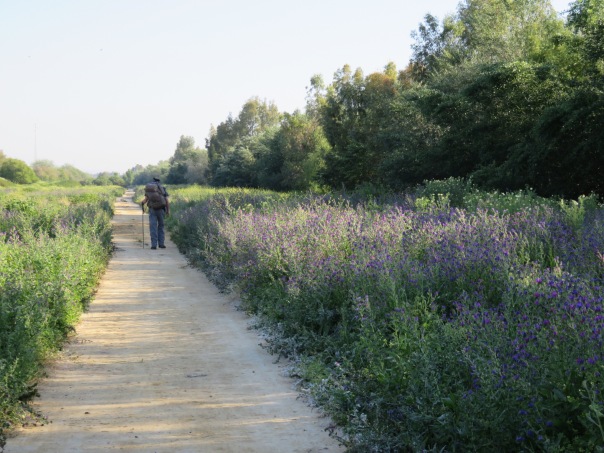 Horses were calmly grazing at the roadside.

By mid morning, Jim had befriended a young Brit named Tom who was walking in the same direction to get the feel of a Camino walk.  He was only out for the day.  Together, they solved the political problems of the world as they strode along.  We also passed two old Frenchmen, and were passed by several bicycling couples.

By 15:00 we arrived in the little town of Guillena, and walked down the Main Street in search of the Hostal/ Bar Frances, which we had prebooked. 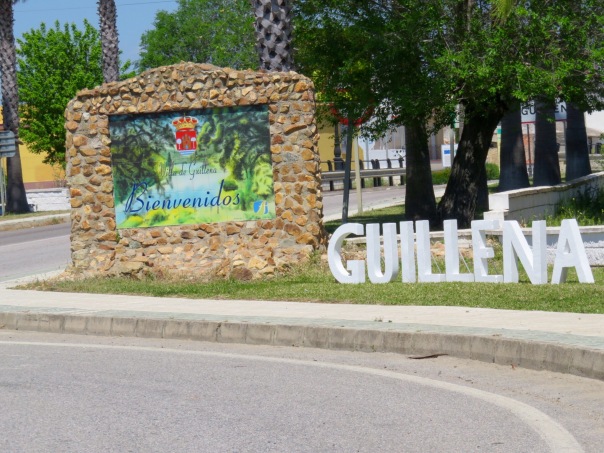 Just to confuse you, I will explain that a hostal in Spain is a small hotel or bar with rooms above.  What we would call a hostel, as in a dormitory of people sharing facilities, is called an alburgue.  We try to stay in private rooms whenever possible, but in some towns the choice is limited to alburgues only.

After a restorative shower, we went downstairs for a hikers Menu al Dia, which is a three course meal for a set price.  These are very popular on the Camino, as hikers are very hungry people!  We had seafood paella, followed by fried calimari, and rice pudding for dessert.  Feeling fine now, and only 608 miles to go!