8/3 – This morning we bade farewell to Nusa Village, and moved to a bungalow in Kuala Tahan.  Here we have a window, wifi, a kettle, coffee, air con, and hot shower  – a wealth of riches for about $17 a night – less than half the price we were paying at Nusa.  Plus, we have our choice of any restaurant in town!  Here’s our yummy lunch – there’s nothing shrimpy about these prawns!

While we were eating lunch, the local school let out, and we watched as the children lined up to buy snacks.  Sugary soda was the number one choice, followed by French fries – I guess kids are the same everywhere!

Durian puffs, anyone?  They were pretty smelly…

When we got back from our hike today, Jim pulled off his boot to find his sock drenched with blood, issuing from a hole on the top of his instep, right at the vein. He felt no pain, and didn’t recall getting bit by anything. We washed it and dressed it, but it continued to bleed. The only thing I know that causes non-stop bleeding like this is leeches, but we couldn’t fathom how one could get under Jim’s boot and sock. A bandaid and pressure stopped the bleeding eventually. Very strange.

8/4 – Today was our last trekking day, and we hit the jackpot for wildlife. Early in the morning we spied a tiny moss deer, about the size of a rabbit. See the reflection of its eyes? 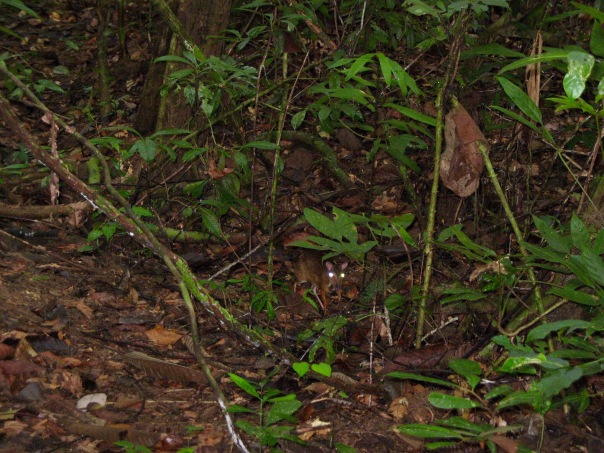 Shortly after, some Dutch travelers pointed out a flying lizard resting on the trunk of a tree. 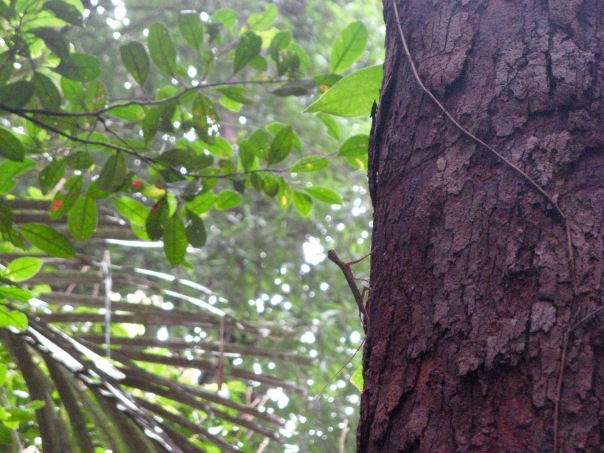 Look close to see the feet and tail of a lizard  – his reflexes were quicker than my camera.  He was about a foot long.

We climbed into a hide – an elevated platform from which we could observe a meadow below, and watched a wild boar come out to graze, and a brown squirrel caper in the branches.

As we walked back, we spied a family of monkeys feasting on jackfruit, high in a tree. We’ve come to understand that telling a Malaysian you want to see a monkey is like telling a New Yorker that you want to see a rat…  Oh well, I still think they’re cute.  Can you see the baby clinging onto the mother? 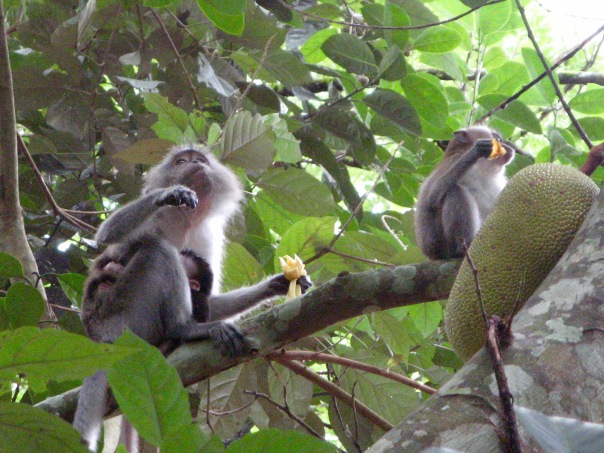 It rains mightily every night, and today we found that some of our floating restaurants had floated away!  Jim had to take off his boots and wade out to the place that sells the tickets for our bus ride back to KL tomorrow. 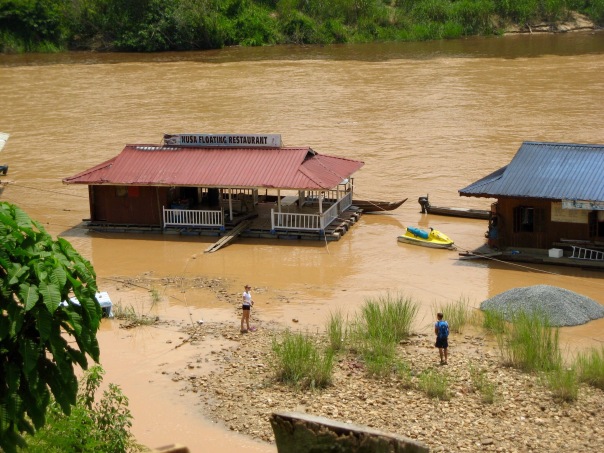 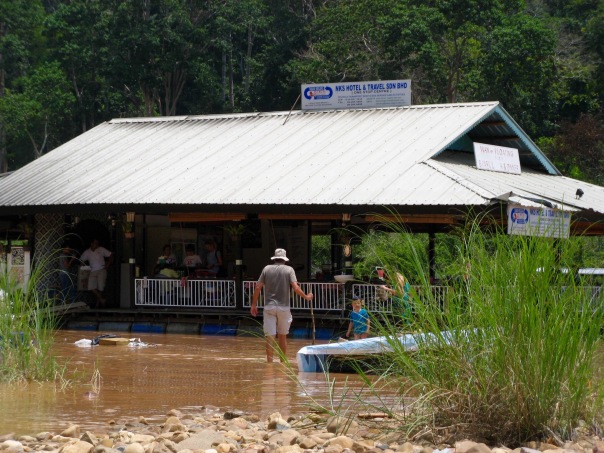 When we got back to our bungalow, it was my turn to take off my boot and find a sock soaked with blood.  I had not felt anything crawl on my foot, but had the same leech-like round hole on my instep that Jim had yesterday.  How curious!