5/29 – We plan to stay in this busy city for only two days.  Here are the Royal Palace and the Independence Monument.

Every city seems to have  the same electrical wire challenge!

We watched some monks standing outside shops waiting for their daily alms.

Phnom Penh is, unfortunately, best known as the center of the Cambodian genocide of the Khmer Rouge in 1975-79(precipitated by the destabilization caused by the abrupt American withdrawal from Vietnam and Cambodia in 1973). We will honor this history by visiting the Genocide Museum at Tuol Sleng Prison, otherwise known as S-21.

The prison is in the center of the city, five buildings that formerly comprised the high school. 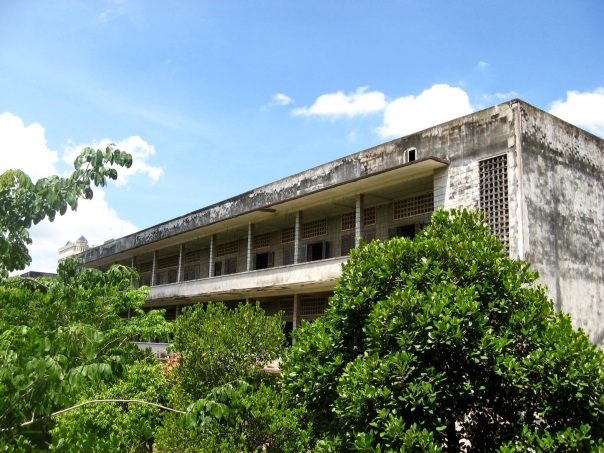 There were only 7 survivors from the prison, where over 14,000 were tortured  before being transported to the fields outside town (known as the Killing Fields) then bludgeoned to death. We watched a movie where three of the survivors; two prisoners and a guard, described their experiences with the Khmer Rouge.

We walked through the dark rooms of the school, where rows of photographs give faces to the victim numbers.  Whole families were imprisoned here, accused of being CIA or KGB by a neighbor, who was tortured to provide names.  By the time the genocide was over, 25% of the Cambodian population had been executed.

The Khmer Rouge, like the Nazis, kept meticulous records of each prisoner. I will spare you, dear reader, from the photos of torture, starvation, and ultimate death, but they are on display here.

We we walked through the classrooms that were subdivided by rough brick and mortar into cells 18 inches wide where the prisoners were kept.  In lieu of restrooms, the cells were hosed down occasionally.

In a room where the cell walls have been taken down, you can see how narrow they were by the cell numbers along the wall.  The floor tiles are six inches square.  Each cell was three tiles wide.

Other rooms had torture apparatus on display, and descriptions of how the torture was carried out.  I’ll spare you those images too.  Rules of interrogation: 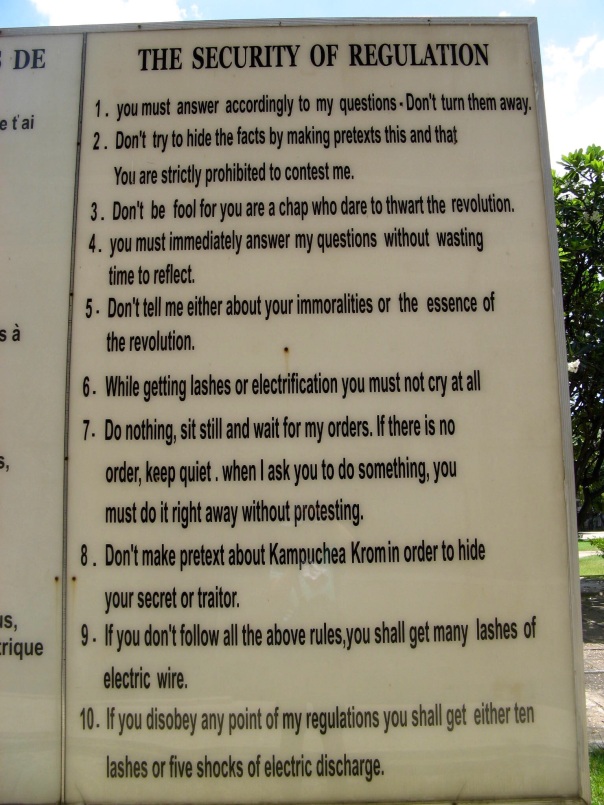 There were cases full of skulls, all with a crack or a hole at the back as evidence of the final blow that sent them into the mass graves.

Two of the prison survivors sit outside the displays, available to answer questions.  They do not want the genocide to ever be forgotten.

After touring the museum, many go out to view the Killing Fields, but I had had enough for one hot day.