5/8 – We are only in Bangkok for a few days, and can’t hope to see all that the city has to offer. Jim has been here many times during his army years, and his years teaching in Asia.  This is what I would call a gritty city – full of smells and packed with people. The image above was spray painted on a roll-up aluminum door. 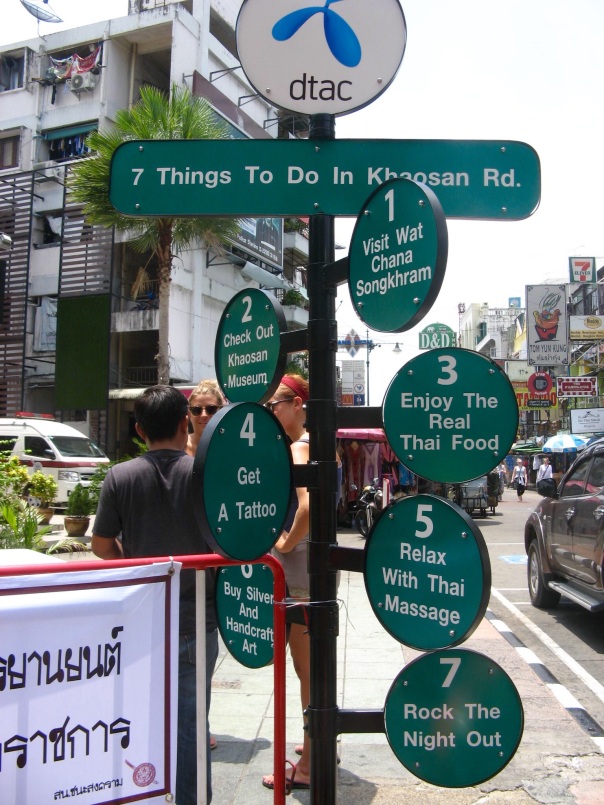 The sidewalks are lined with food and trinket vendors so that you can only walk single file, and have to watch not to get burned on a steaming wok or flaming hibachi.  Great food, though, any time of the day or night! 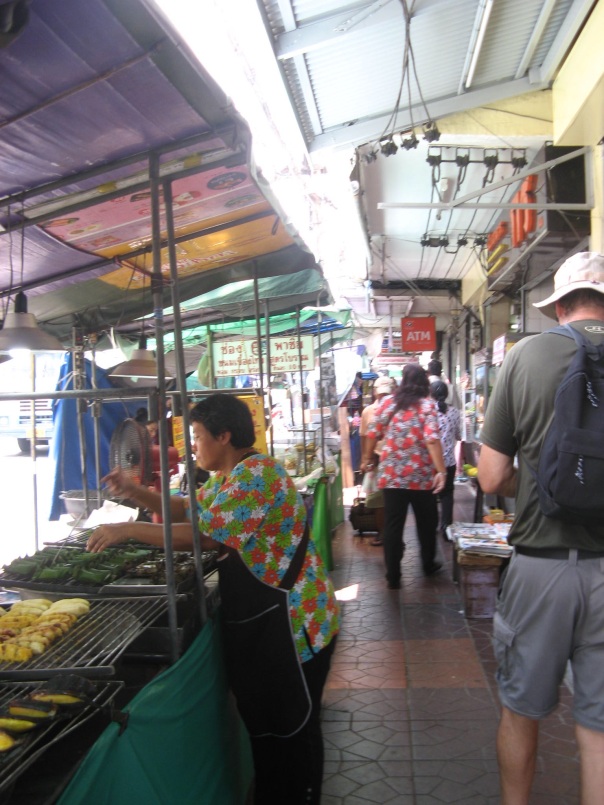 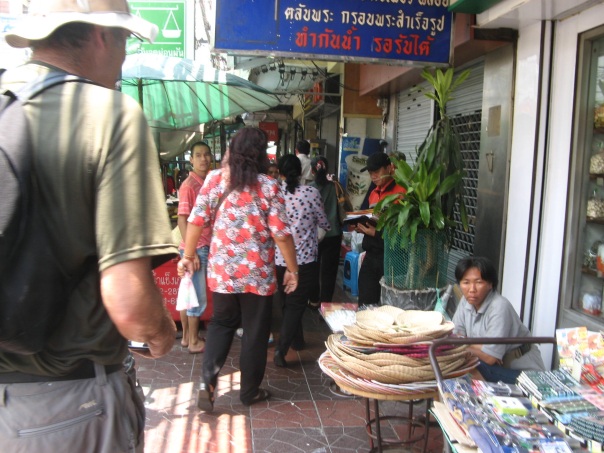 Jim recommended that we see the Grand Palace, which contains the Emerald Buddha. We have already been to several places in Laos and northern Thailand where the Emerald Buddha used to reside Before King Rama I moved it to Bangkok in the 1700s, so it will be nice to finally see it and determine what all the fuss is about. The Palace was within walking distance, across a busy highway adorned with pictures of the Queen(?) and lots of elephants. Did I mention, it was HOT? 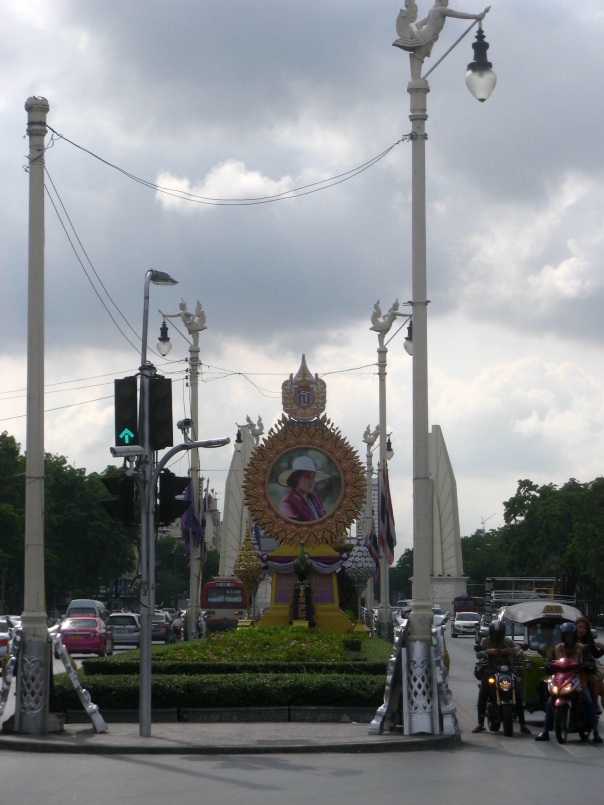 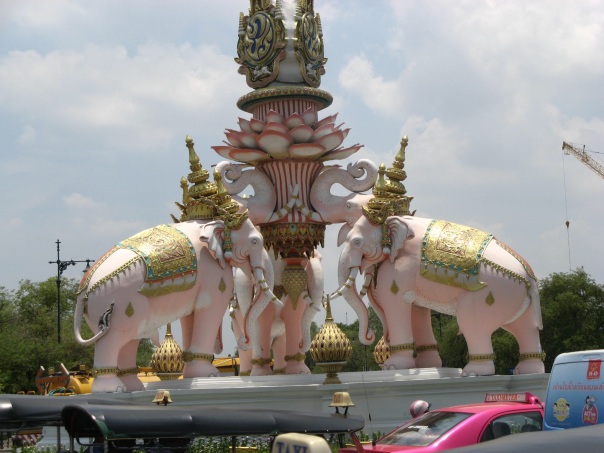 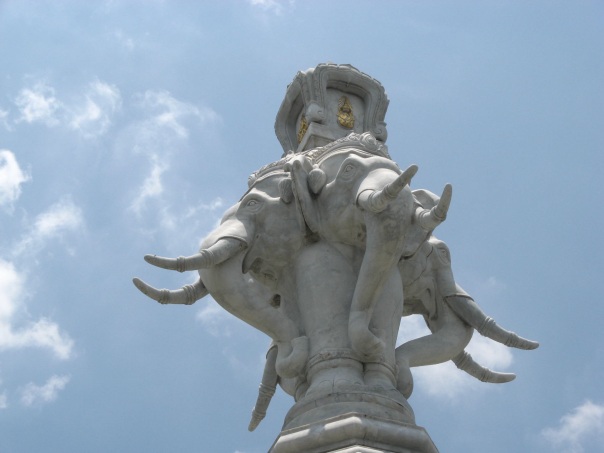 The Palace was jam packed with tourists.  After covering arms and knees (bring a shawl or rent one), we went with the foreigners… 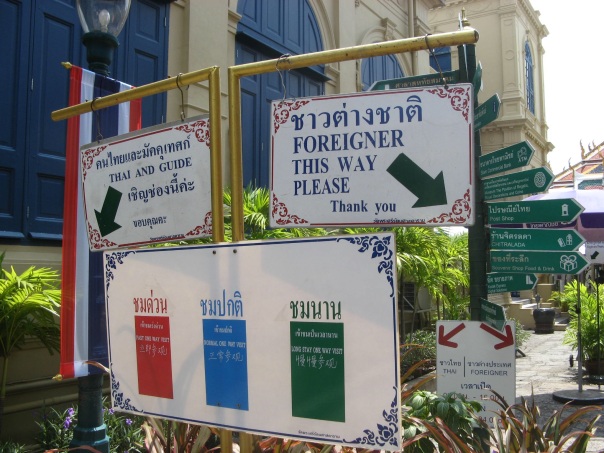 The Grand Palace is a series of ornate buildings, most of which can only be viewed from the outside. 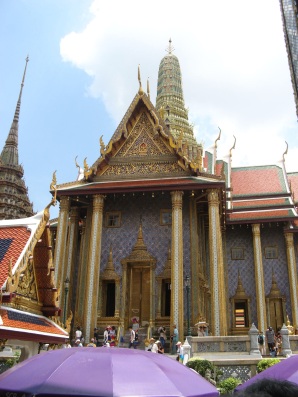 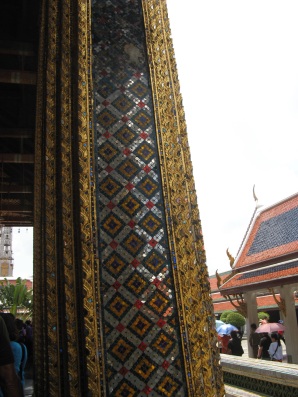 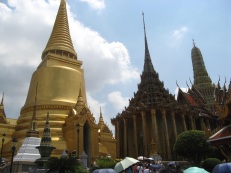 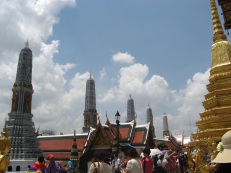 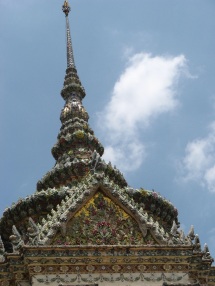 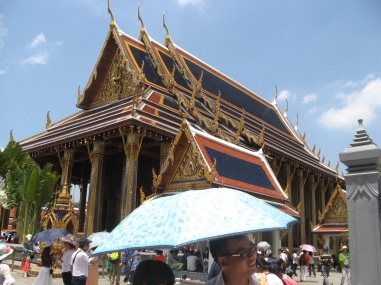 The exception was the Royal Monastery of the Emerald Buddha, where we removed our shoes and joined the throng paying homage. The statue is actually made of jade, but the first monk who discovered it, covered with plaster in the 1400s, saw a glimmer of green under a chip on its nose, and mistakenly thought it was made of emerald. The statue wears a different outfit for each of the three seasons, and it is dressed by a royal official for the Hot, the Wet and the Dry. This is the Hot. There were no pix allowed inside, so here is one courtesy of Google images: 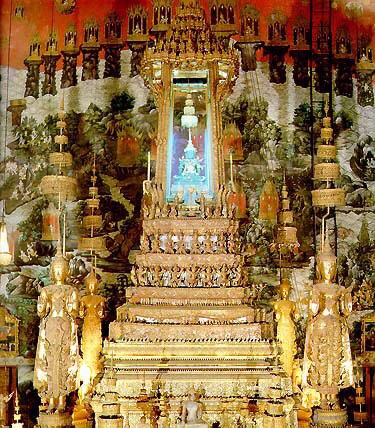 My favorite images are of all the guardians of the temple: 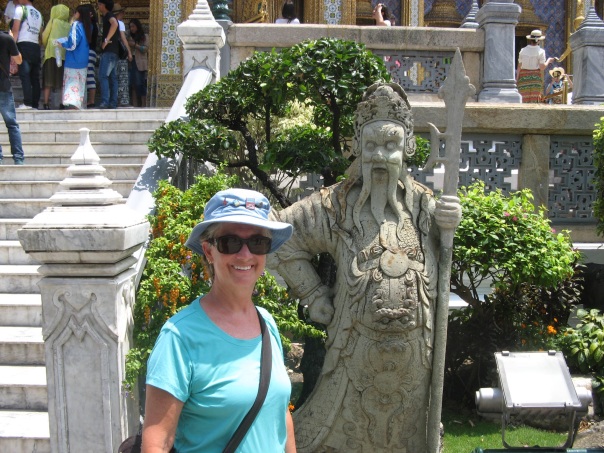 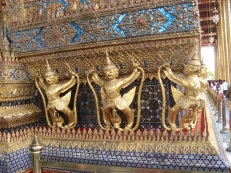 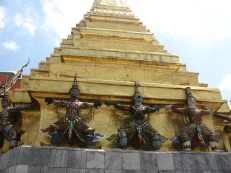 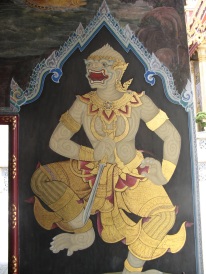 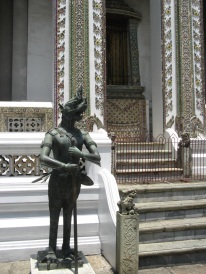 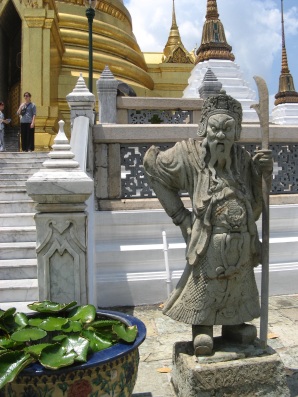 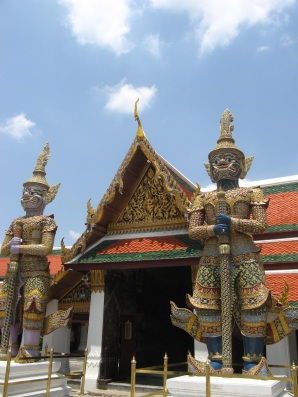 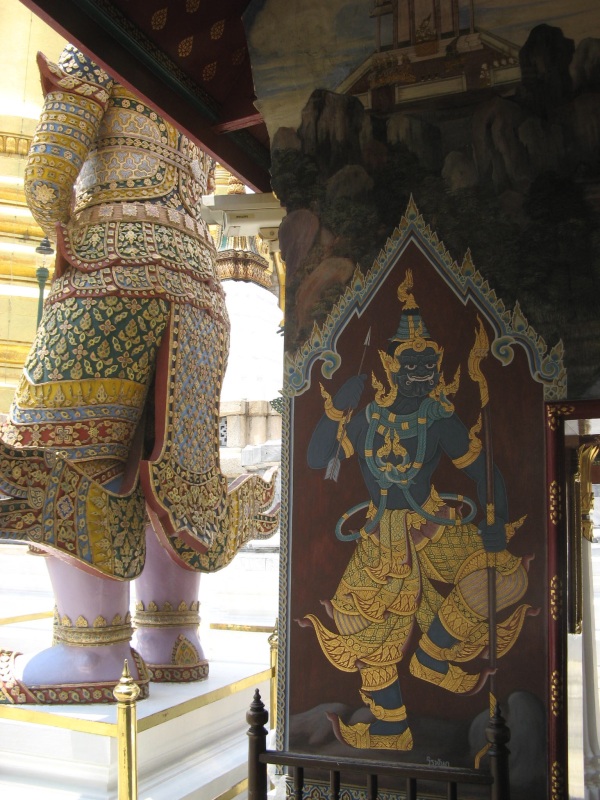 We visited the Amulet Market, where Buddhists come to purchase tokens containing images of the Buddha, famous monks, or bodhisattvas. Some are as small as a dime, and some are full size statues, carved, cast, painted or photographed. Vendors line several streets offering their wares, and men with magnifying glasses pore over bins full of small amulets, looking for one that may be an antique, rare, or worth lots of money. I guess this is the Thai equivalent of stamp collecting. 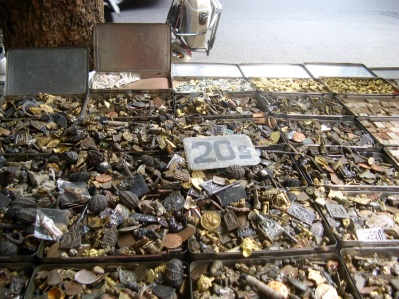 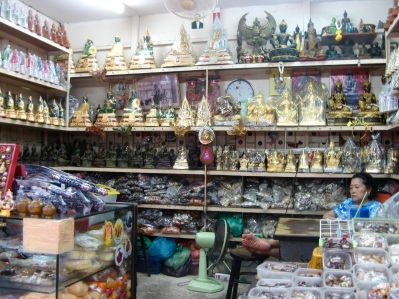 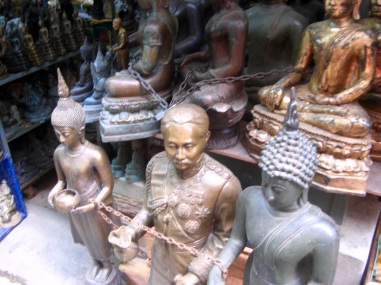 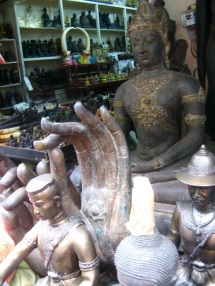 Not knowing which to select, we followed some monks and bought the same kind they were buying. Monks should know, right? 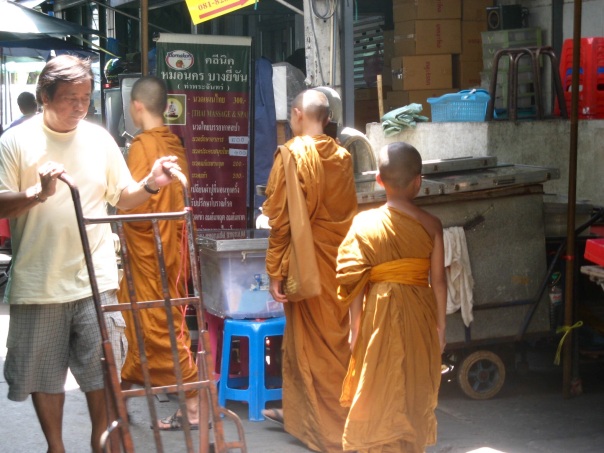 On our walk home, we saw Mother Earth squeezing her hair to give water to the world. Now you know! 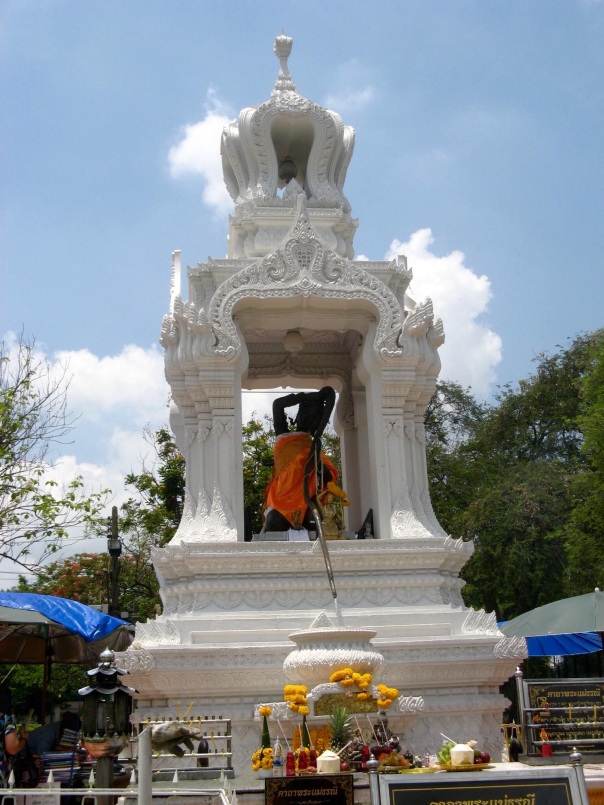