4/6 – Happy Easter to those celebrating far away – no sign of bunnies or jelly beans in this town! Today we are hiking to Lusi Cave, which, according to the sign, is just a kilometer out of town. It promised to be another 100 degree day, so we left right after breakfast before it got too hot. The mornings here are very pleasant – in the 70s.

We followed handwritten signs with arrows pointing down a trail through some farmers’ fields and unplanted rice paddies. We met a herd of young cows, grazing free, and a couple of young bulls butting horns to show off for the ladies. 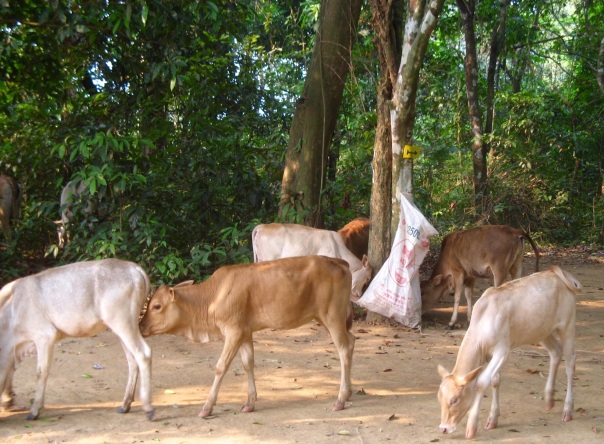 Soon the fields turned to a shady wooded path, with signs that continued to say that the cave was 1 km away. Must be the longest kilometer ever! We got to a hill with a flag on top, with a shack and a sign that promised that we could climb the hill for a great view for only 10,000 kip. There was no attendant here, and the gate to the first ladder was locked, so we hiked on.

Jim is never quite as happy as when he is hiking a trail through the woods.

45 minutes later, we arrived at another shack and another sign. The cave was straight up from here, but again there was no attendant. We saw a steep ascent and a ladder, which my arm was not ready for, so I told Jim to go up, and I waited in the shade below. In a minute, he called down that there is a locked gate here too, but he was going to try to climb over it.

Just then, we heard a motorbike, and a young man pulled up! He was the attendant, and he grabbed a flashlight and motioned for me to follow him up. I declined, but called out to Jim, and when he heard Jim’s voice above, he understood that his customer was up at the gate.

I passed the time swatting flies and admiring the little altar erected at the base of the climb up to the cave, with offerings of food and flowers. Those are little 3 inch bananas, to give you an idea of how small the Buddhas are.

Half an hour later, Jim returned, triumphant, having climbed up to the cave and experienced the dark and the cool, the stalactites and stalagmites. Unfortunately, it was too dark in the cave for pix, but it sure sounded like fun. 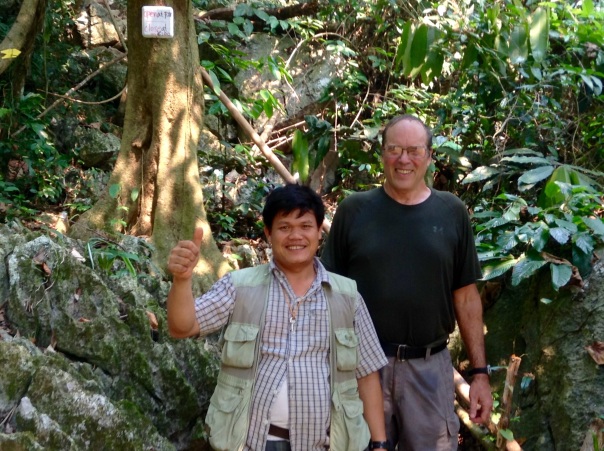 Walking back in the heat of noon was not so much fun, and reminded me of the old song that only “mad dogs and Englishmen go out in the midday sun”.

Here’s an interesting note about Vang Vieng: did you know that they have bars/cafes here that play episodes of Friends 24/7? Now that is something you can’t get everywhere… Book your tickets for Vang Vieng today!

And in case you were wondering, here’s what Coke and Pepsi look like in Laotian! 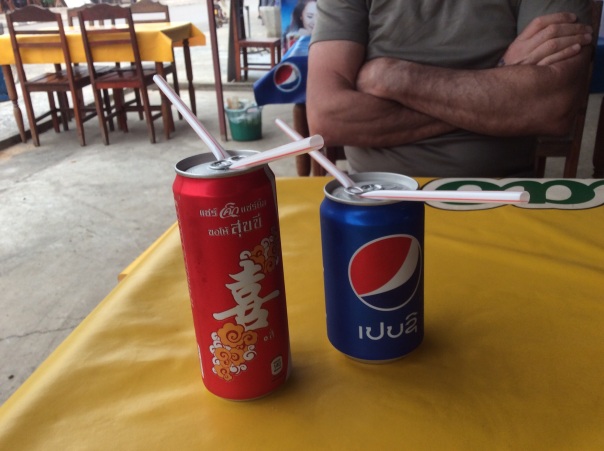 Sheesh – slow news day. Must be time to move on!