2/17 – It is minus 10 degrees F when we get off the train.  Oh my it is cold!  We stay in the station to buy the tickets for the next leg of our journey.  It’s about 8am by the time we exit the train station, and still pitch dark.  We know that the Hotel Aka is not far from the station, and decide to walk it.  It is snowing, and the streets are covered with snow and ice. Taking baby steps to avoid slipping on the ice, I go down anyway like a ton of bricks with my backpack on.  Left knee, right shoulder.  The air is knocked out of me, and my arm really hurts – I think maybe something is broken.  Jim hauls me up, shoulders my pack as well as his own, and we keep walking, while I make little whimpering sounds.  We stop to ask directions several times, but no one can point out our hotel.  We finally go into the lobby of another hotel and ask.  The lady says we passed it.  I sit down and can walk no further.  Jim asks the lady to call us a taxi, which then takes us back up the street to our hotel, which we had passed in the dark (the entrance was not on the main road, and the hotel name was not displayed, so we walked right by).  I can’t wait until we get back to a country where we can use the GPS on the phone!  Don’t know how people ever navigated without it.

We get up to our room, and Jim pulls up Google Translate to figure out how to say ‘my wife needs a doctor’ in Russian.  I tell him I’m not going anywhere (after two full days on the train) until I’ve had a hot shower.  The shower enables me to assess the damage – knee scraped and swollen, and shoulder painful, but I can move everything.  I don’t think anything is broken, and ask for some ibuprofen and a day of rest.  It continues to snow all day – a good day to stay inside.

2/18 – This morning it is minus 20 degrees!  Jim thinks I must be reading Celsius instead of Fahrenheit.  Nope  – in Celsius it’s minus 29!!  I am feeling better today after a good sleep and ibuprofen every four hours.  My upper arm is one big bruise, and I don’t have range of motion, but it feels like a soft tissue injury, and I just need to give it some time to heal.  Today the sun is out, and it is the day we had earmarked for walking around the city to see all the monuments, but no way am I walking on any more ice!

We have breakfast at the hotel, and lunch at a cafeteria next door where we can point to food instead of trying to interpret a Russian menu.  It is definitely not high cuisine. After lunch we put on our long underwear, bundle up, and Jim asks for a taxi.  We travel to the other side of town, where there are lots of skyscrapers, and a long mall like in Washington D.C., with monuments on both sides. Astana became a capital city in 1997. The word Astana means capital. Most of these buildings have been erected within the last 10 years!

Our first stop is the Palace of Peace and Accord, a conference center built in 2010 to foster communication and peace among religions.  It is shaped like a pyramid, and is supposed to have a stunning room at the top.

The taxi drops us off in front, but it has a big promenade drive, and by the time we walk up to the door my mouth is frozen and tears are sprouting in my eyes.  So cold!  And windy! 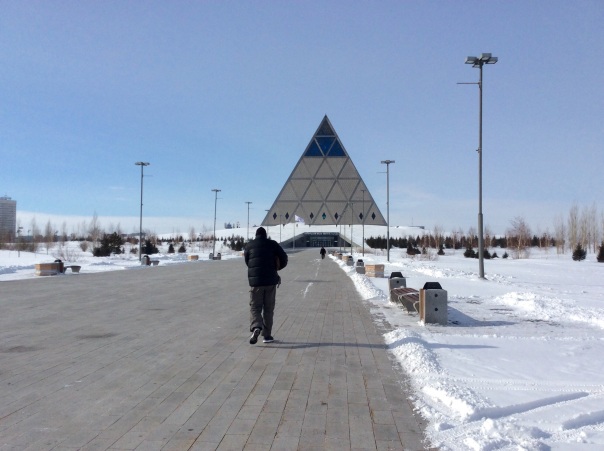 I reach the door first and pull on the handle – locked!  I can see people inside, and bang on the door.  A security guard opens the lock and begrudgingly lets us in.  He motions us over to two young women behind the counter, who tell us in very precise English that the elevators in the building are not working, for an indefinite period, so no tours are being given.  Perhaps we can return next month?  Jim and I give each other the “you’ve got to be kidding” look. We ask if there are stairs we can walk up, but are told no. We ask if we can at least look around the ground floor, and we’re told we could. 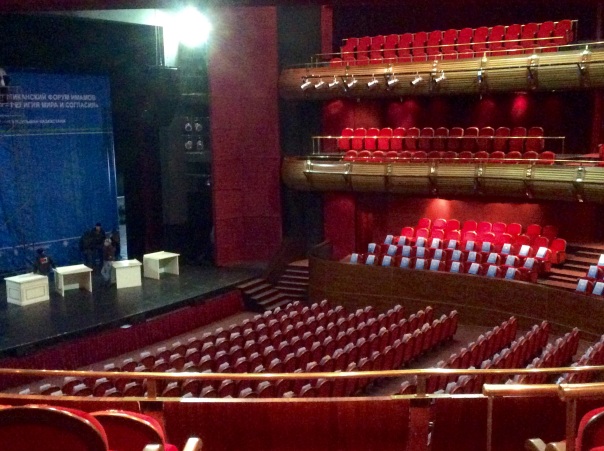 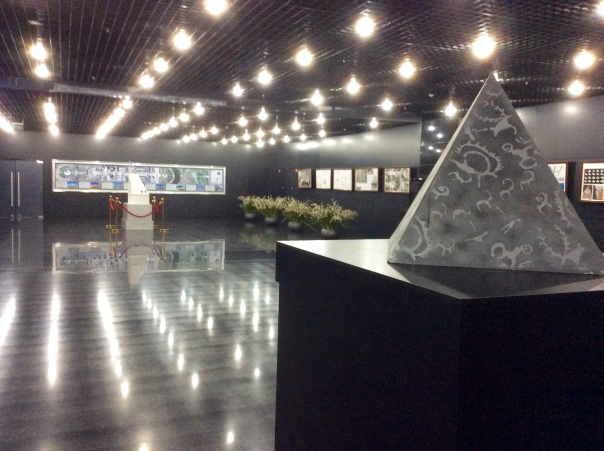 There is a big staircase, and we start to walk up, when an older, supervisory looking woman stops us and says we can’t proceed without a guide. We say we were told we could walk around. She leaves, and suddenly the two young women from the front desk are marching up the steps – they are now our guides!

They show us the library on the second floor. 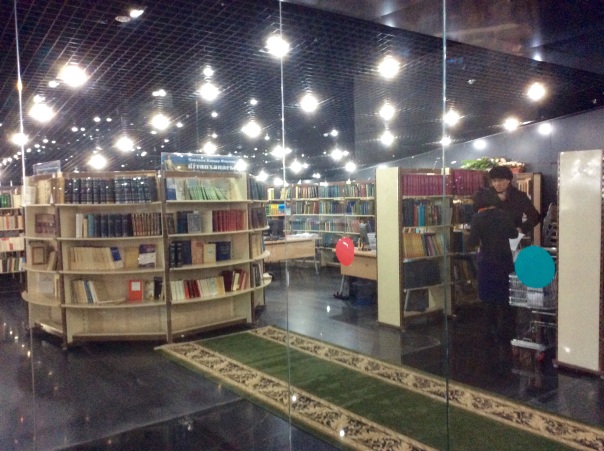 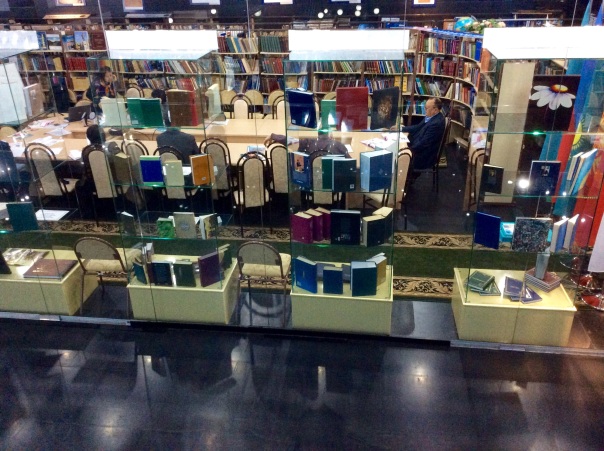 On the third floor are Egyptian artifact replicas.

Also, a display of native costumes, representing the 106 ethnicities of Kazakhstan: 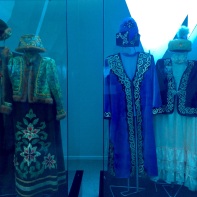 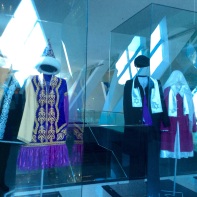 That’s as far as we got. Here is a window with doves on the staircase: 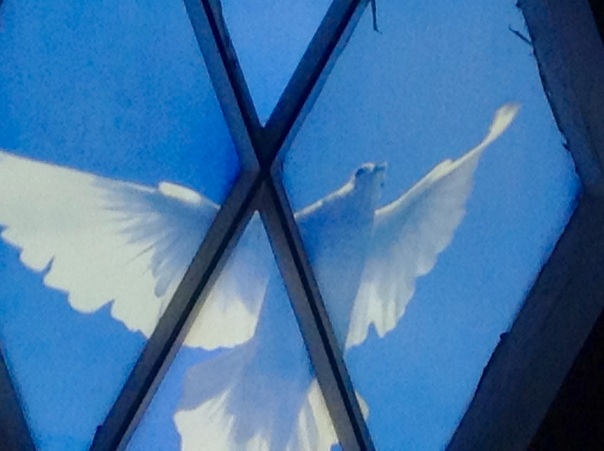 The top of the pyramid is supposed to be breathtaking with these doves on the glass, but we won’t get to see it today.

We thank the young women and ask them to call us a taxi so we can visit the Bayterek. One of the girls tells us it is not too far – we can walk. I say today is much too cold for walking, but they laugh – this is normal weather here – they don’t think it’s cold until it gets to 50 below!

The Bayterek Tower was built in 1997, and represents the folktale in which the bird of happiness lays a golden egg in the branches of a poplar tree.

We entered on the ground floor and purchased tickets to ride the elevator up to the observation deck. Here we had a 360 view of the city through tinted glass. 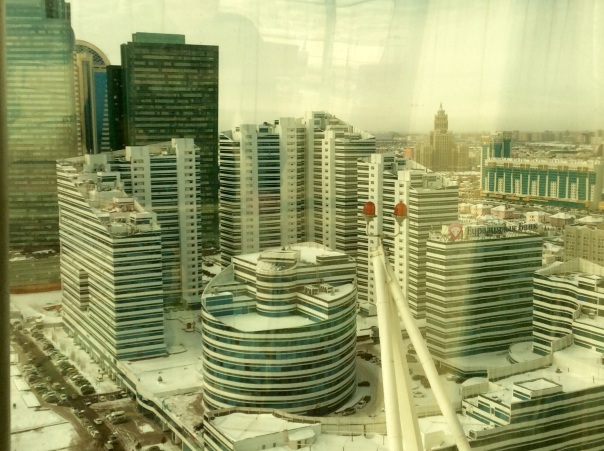 Beyond the office buildings known as the Golden Beer Cans, you can see the Pyramid we visited earlier.

There were lots of visitors here, lining up to place their palm in the president’s golden handprint, and snap pix of the views. 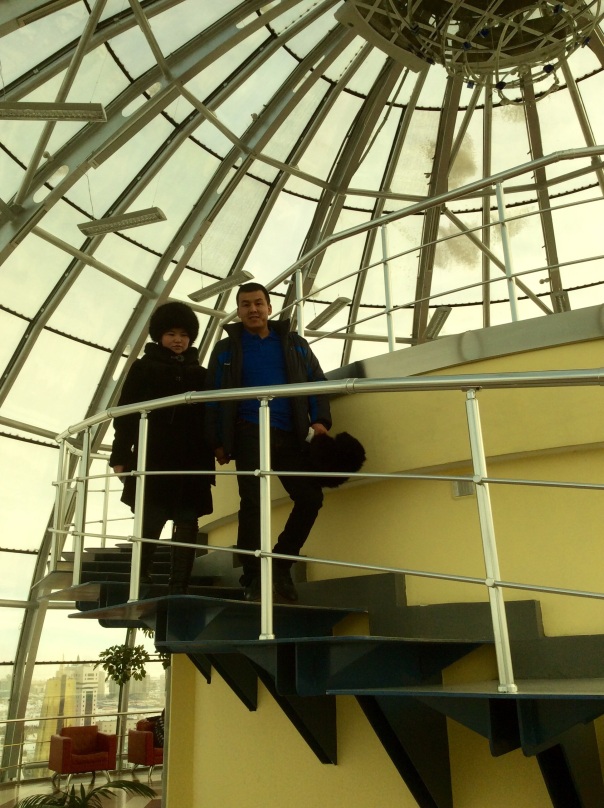 We hailed another taxi to take us back to the hotel – enough excitement and cold for one day! These are some other notable buildings seen through the cab windows. The very large Hazrat Sultan mosque:

The Palace of Creativity (looks like a dog bowl): 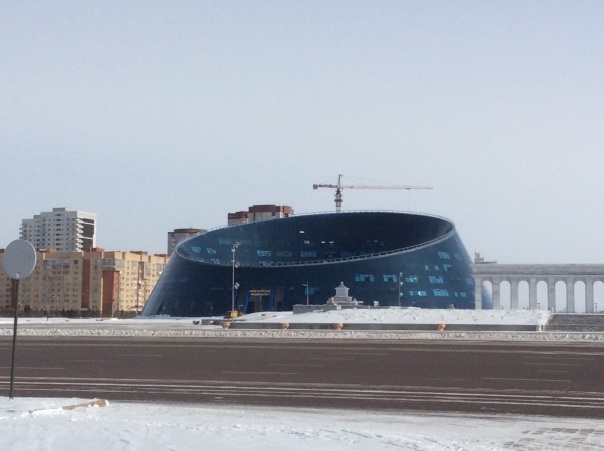