12/16 – today we went back to the Lycian Way and walked the other direction to visit Kayakoy, a hillside village that was abandoned after World War I, when the Turks drove the Greek Christians out of the country. The Greeks called it Karmylassos. Kayakoy is now being restored as a heritage site.

As we were walking, a car pulled up and asked if we needed a ride. We weren’t sure how much farther we had to walk to get to the village, and it was all uphill, so we jumped in. The Dutch couple had retired to Turkey, and thought we looked like foreigners. Nice People of Turkey!

It was strange to see what ruins look like after less than 100 years. We have been learning about the fall of the Ottoman Empire and the nationalization of Turkey in the early 1900s. For an excellent historical novel that tells the story of this village, I highly recommend Birds Without Wings, 2004, by Louis de Bernieres.

The village was eerily quiet. Here is the St. Nicholas Church.

The remains of a mosaic on a chapel floor:

The houses had been painted pink and blue. 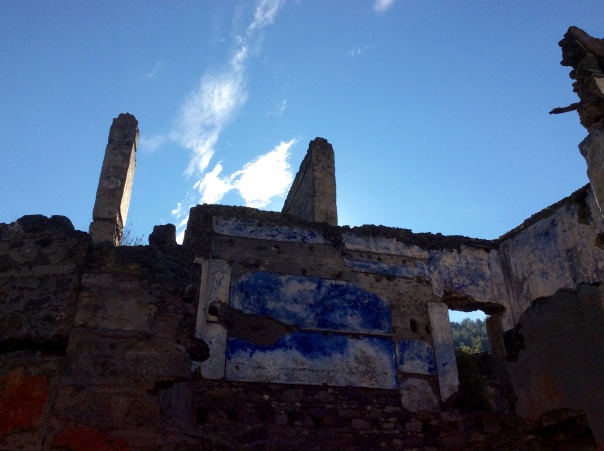 The houses were cut into the mountainside, so the downstairs room was cool. No hint of electricity or plumbing. Here are the remains of a kitchen hearth.

We climbed to the top of the hill.

Some of the buildings at street level have been repurposed as restaurants, as tourists are starting to travel here.

The grass still grows, and the flowers still bloom. 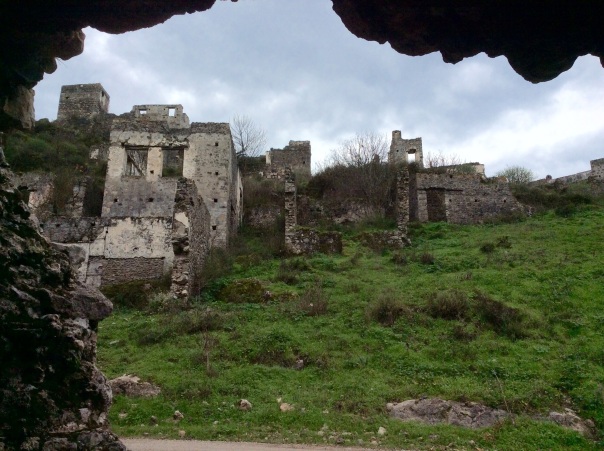 Such beautiful surroundings for such a sad story!