11/8 – one train a day travels the 6 hours down From Zagreb to the southern shore of Croatia, and today we were on that train – the only passengers in the first class car, thanks to our EuRail pass. We are leaving autumn for one more glimpse of summer.

We saw additional signs of flooding, out our window. 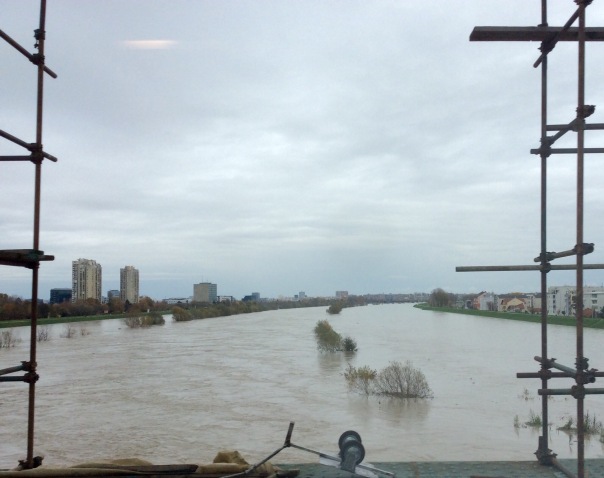 An hour into the journey, our conductor informed us that we would be stopping and getting on a bus. Again?? I asked if it was due to a flood, and was told no, there was an accident. Did the train hit a car? Was everyone okay? No, an old man, and no. So we got another bus ride, and time to contemplate how quickly an ordinary day can turn into something else.

Back on the new train, we engaged our conductor in conversation. Her English is great, although she says her Italian is better. She has two teenaged daughters, one preparing for university, and one who would rather work for low wages. The economy is not good here, and really depends on the tourists.

We arrive in Split only 15 minutes late, although we had lost an hour due to the accident. It is very dark, and there are no street names on the corners. Jim is trying to follow his map, but in a short while, we know we are lost. A woman stops and looks at the address – it’s this way! Or maybe that way… She walks on.

Then a car pulls alongside, and a very American voice says, “You guys look lost. Do you speak English? Can I help?” He takes a look at the address, and recognizes it as the street where his in-laws live. He starts to direct us back the way we came, and then decides it would be easier to drive us there. Turns out he (a very tall man) went to Northwestern in Chicago on a basketball scholarship, and then moved back here with his wife and one year old daughter. We were only off by a block, and soon we are back on the street, thanking him profusely. Nice Person of Croatia!

We walked up our new (pedestrian only) street, looking for #63. When we found it, it looked dark and empty. We rang the bell, and a grandmotherly lady came down from the upper floor. “Oh, you’re here! I wasn’t expecting you til tomorrow!” Turns out we had made the online reservation for the wrong day. Sheesh! Our host Pera, assured us it was no problem, and offered us some schnapps. Another Nice Person of Croatia!

So here we are, a block from the beach. The weather is warm, and tomorrow we will see the city.