10/2 – Ponte de Lima is a town that doesn’t take itself too seriously:

A man stopped us to explain that when the Roman soldiers were ordered to cross the river into Ponte de Lima, they refused to do so, as the river was so beautiful that they feared they were crossing the River of Life…

We were on the road as the sun came up, and the music piped through the streets was a very mellow instrumental version of Hotel California: you can check out any time you like, but you can never leave… 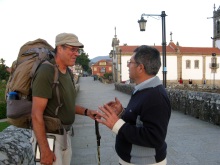 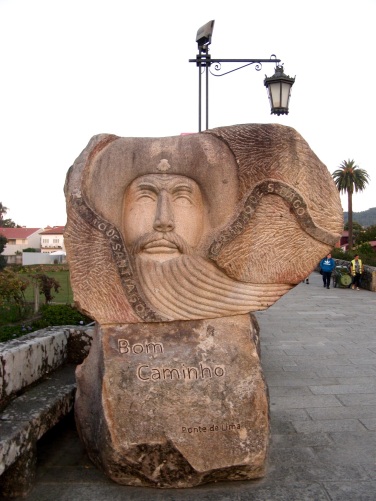 Today we climbed a big hill. Took about an hour to get up, over big rocks. We were very glad it wasn’t raining, which would have made the rocks slippery. I was looking forward to capturing the panoramic view from the summit to share with you, but there was nothing to see, except the trail back down the other side! Oh well. 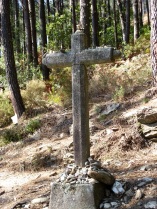 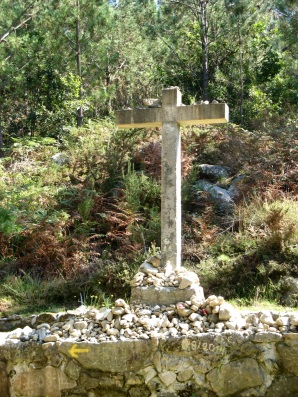 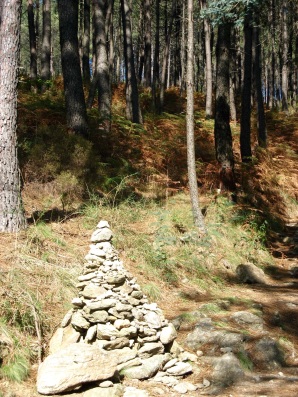 We checked in at the first residencial we passed in Rubiaes, where there really isn’t any town. For the third day in a row, a nice lady has taken all our dirty clothes, washed them in her machine, and hung them up to dry for us. This is the cleanest our clothes have been in a month!

The waiter from the nearby restaurant picked us up at supper time, where we met all our friends of the day: Mary and John from Australia, Richard and Pat from Canada, Mark and Julie, young retired Americans who now live in Hungary, Hannah from Germany, and the Italians who climbed the hill with us. Good food and good company.