Feb 23 – We walked to the bus station in Cobán, where we were accosted by different bus drivers, all eager to take us to Lanquín. Jim picked the guy with the bus idling in front, as it looked like it was ready to depart. As soon as we got on, the driver jumped in, parked the bus and turned off the motor, telling us we’d leave in an hour. Gotcha!

He was a very nice driver, and we spent the hour teaching each other words in English and Maya, using Spanish as our bridge. There are 23 different Mayan languages, and more than 95 dialects – I have no idea which language we were practicing. I wish I could remember even one Mayan word to share with you, but vocabulary doesn’t stick for me unless I can hear it and see it repeatedly. It had lots of x and guttural sounds – nothing at all like Spanish. He said he had twin girls, and took out his phone to show me a picture of just one little girl. Two, he said, just like that one. (Ha!)

This ride took only two hours to cover the 32 miles to Lanquín, nicely paved until the last half hour, when the road turned to dirt and got bumpy. We were the only gringos. The bus stopped frequently for natives with big bundles waiting at the side of the road – ladies with bags of watermelon, baskets of produce, men with sacks of corn meal and rice. A mattress was added to the roof of the bus. Unlike the dry dusty route to Cobán, we are traveling up and down lush, green mountains. This is the jungle.

As we approached Lanquín, a guy speaking rapid English got on and told us we had to come with him right now if we wanted to get to our hostal at Semuc Champey, which was another 7 miles down the bumpy dirt road. Our plan was to have lunch in Lanquín before tackling the last leg of the journey. The tout was very pushy – you want lunch? Here’s a nice place. I tell you this for free. Eat, and then we go. What do you want?

We managed to have a nice enough lunch (chicken, rice and mixed vegetables) then the guy came back and told us he was leaving in five minutes. Unlike other places where lots of drivers vie for your business, he appeared to be the only game in town. He flung our packs into the back of a pickup truck, then indicated that WE were to get in the back as well! Not what I was expecting!

We stood up in the back, clutching the bars and holding on for dear life as the truck jounced through potholes in the dirt road and careened down the mountain. Forty five minutes to ride the seven miles to Semuc Champey – longest roller coaster ride ever! 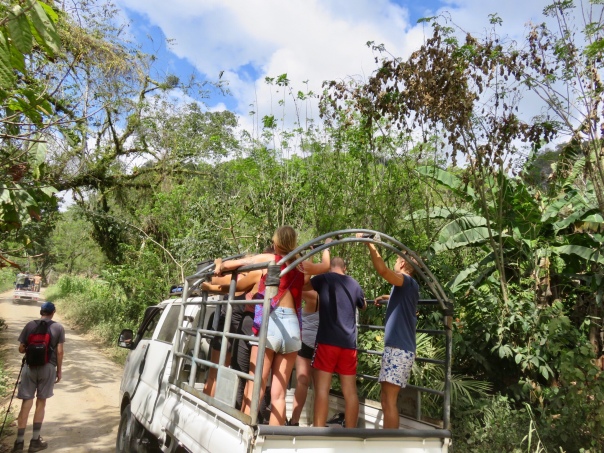 The last bit was going over a bridge with a surface of wooden boards, several of which were missing. Will ours be the truck that doesn’t make it? This ain’t Disneyland. 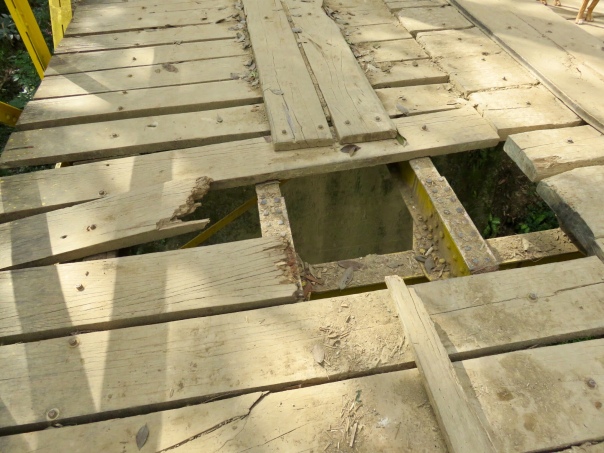 Finally, we arrived at Hostal El Portal Champey, where we were given our own little thatched roof hut with a hammock overlooking the Rio Cahabon, where little boys jump from a big rock.

There is a pool and a restaurant here. No WiFi, no hot water, and electricity only from 6 to 10 pm, when they turn the generator on. Perfect weather. Heaven! 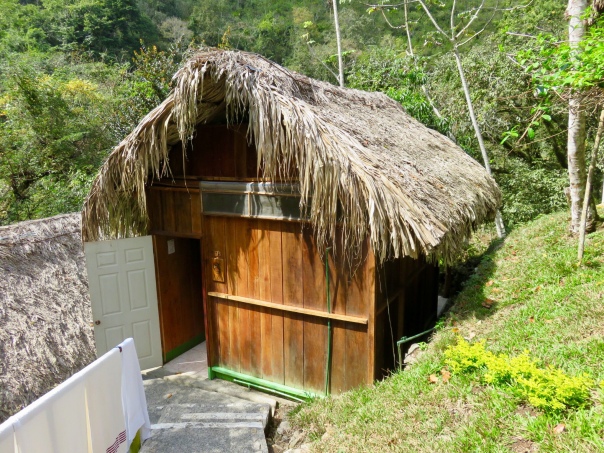 Feb 24 – I must say that last night was the best sleep I’ve had in weeks. So quiet! Most of the young partying travelers stay in Lanquín and only come here for one day. Our place is more like a resort, catering to families and even some oldsters like us from all around the world. So many languages heard in the restaurant!

We looked at the group tour itinerary on the wall at reception:

I wore myself out just typing that. We’re here for four days – we can take it slow (and definitely skip the underwater caves). Today we will walk two minutes down to the Semuc Champey national park, and see what all the fuss is about. Semuc Champey means “where the river hides under the stones” in Mayan. The entrance fee is pretty pricey for this country, about $7.50 US per person. The trails are well marked, and there is no reason to hire a guide, although several offered their services.

While the morning was relatively cool, we tackled the mountain hike up to the scenic overlook. It’s supposed to take 30 minutes. The path up alternates between rock scrabbling and steep steps. 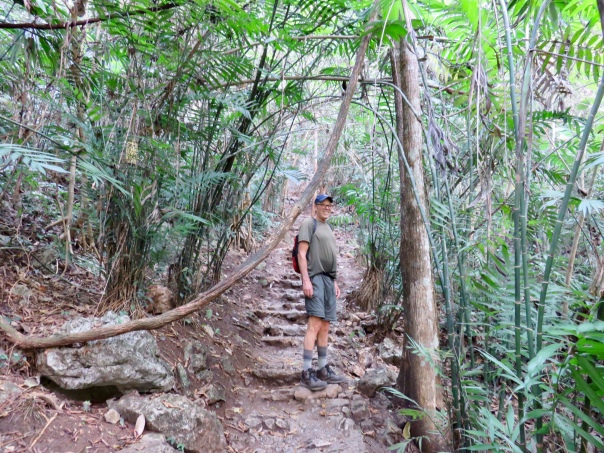 It took me almost an hour, moving uphill in first gear. We met a family with two young girls, Arwen and Caterina. The dad, David, had good English and talked to Jim for a while. He was familiar with Tidewater, Virginia! As Jim got farther and farther ahead of me, David called out to him, “Jim! You are forgetting something! Jim, where is your wife?”

I finally reached the overlook, and it was indeed pretty spectacular – deep blue pools, rimmed with white stone, and lots of people taking advantage of the cool water. Now to climb back down so we can jump in!

After another hour, we are down at water level. The pools are surrounded by jagged, slippery limestone, impossible to walk barefoot. There was a changing area, and we put on our bathing suits and removed our boots. Jim had flip flops, which just skidded out on the slippery rock. I had better luck with my Keen sandals. We finally got to the edge and jumped in. Pure heaven – cool and deep and perfect for a noon swim. We stayed in for about an hour, thinking of the folks on the tour who did not have this luxury of time.

We got dressed and ate our sandwiches for lunch, then hiked the rest of the trail. What a beautiful place.

After walking home and taking a swim in the pool, we went back down the road to the native comida we saw this morning. Women grilling chicken and pork on an open air stove and slapping out tortillas, children selling homemade chocolate wrapped in foil, dogs and pigs staying nearby to catch any scraps that might be tossed their way. 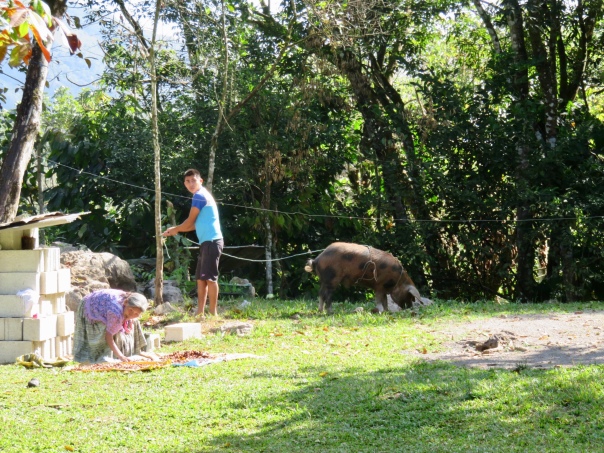 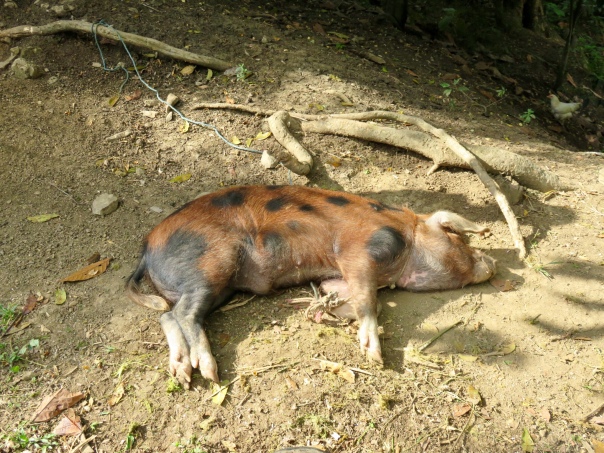 We met a guy from Switzerland and his girlfriend from Indonesia, who were traveling across the country by motorbike. Yikes! They said the going was slow due to the unpaved roads, and I totally understood.

I am writing without benefit of WiFi. I’ll post when we return to civilization. More tomorrow.